Retired woolbuyer Malcolm Edinger and his wife Diana, who live with their 18-year-old daughter Eliza, bought this lovely East Fremantle Art Deco house in 2002 and I recently spent a very enjoyable afternoon chatting to Malcolm. Diana, a midwife, was volunteering in Africa when I visited. 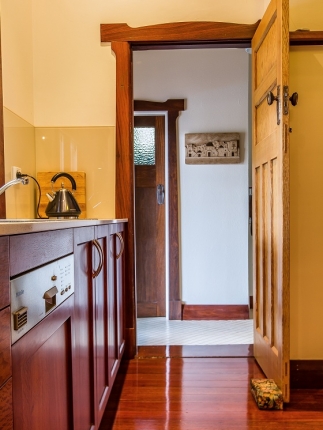 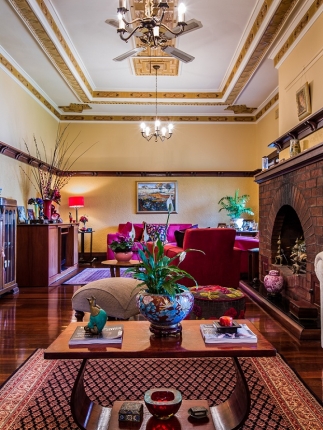 ABOVE LEFT: The old door from the kitchen. ABOVE RIGHT: How stunning are the ceilings? It’s not unusual for houses of this era to have ornate ceiling details, but what is unusual is the ceiling detailing in the Edingers’ house. When they moved in the detailing had been meticulously hand-painted, trompe l'oeil style. “A lot of people think it’s wood when they first see it,” says Malcolm. ABOVE: Love the bedhead in the guest suite. 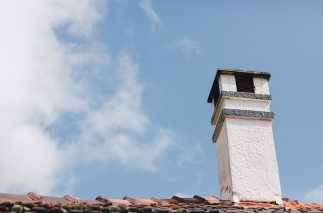 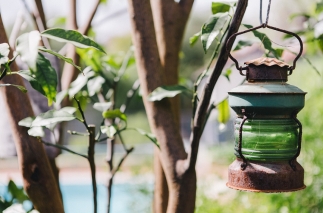 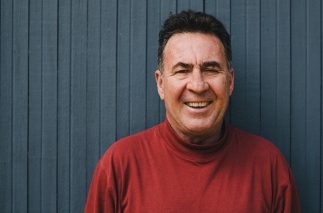 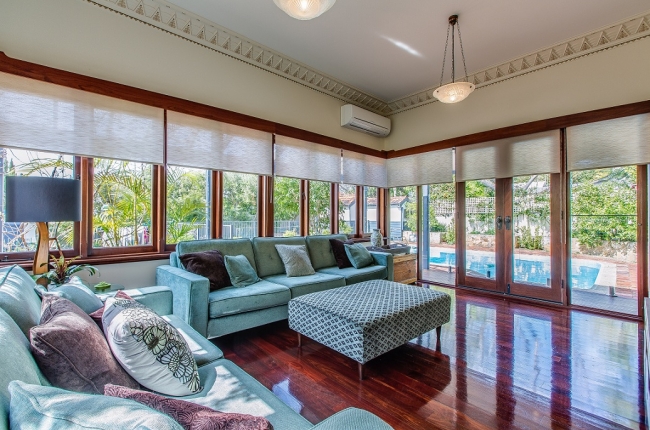 THE FOOTY ROOM: At the back of the new extension is a light-filled family room - or should I say the footy room, as the Edingers call it. Malcolm says this room becomes all his when the game starts. “As soon as the footy’s on she’s out.” Jarrah windows and doors connect the room to the garden, where there is a pool and a thriving veggie patch.

The Edingers have more than that one connection to hospitals. A block away from their Art Deco house is the old Woodside Maternity Hospital. When the hospital was founded houses were built nearby for the surgeons and doctors who worked there. Many of these doctors’ residences were grandly proportioned compared to other homes of the same era, ornately detailed and very English in style, and it is thought the Edingers’ house was one of them. Malcolm was born at Woodside, and when the Edingers decided to extend their house, they found out that the firstborn of their builder, Nigel Gibbs, was born at the hospital too!

Built for the grand sum of 1100 pounds in 1934, the Edingers' house is a lovely example of Art Deco and Malcolm and Diana were keen to keep that Art Deco feel when they decided to extend

The couple bought the house in 2002. “When I first walked into the house, I knew it would be a good home,” Malcolm says. “It has such a good feel to it.” When they moved in, the house still had its original configuration of two bedrooms and one bathroom, and the family lived with it that way until last year when they decided to extend.

Malcolm is fun - very warm and funny, and jokes around with Nigel, who is the director of Positiva Building. Malcolm makes me laugh by jokingly asking if I have a teenage daughter (I still get asked for ID half the time) and then says that living in a one bathroom house with a teenage girl meant serious issues. “The extension was done for Eliza!” he says.

The Edingers asked renowned architect Gerard McCann to design the addition and Nigel to bring it to life, and they are thrilled with the result. “He’s a good builder,” says Malcolm.

Working predominantly on homes south of the river, Nigel takes on six to ten projects a year and specialises in renovations and extensions. “I’ve always liked older style homes, the high ceilings and the feature details,” he tells me. “They are fun to do and the Edingers were great to work with. They’re amazing clients.”

The thing I loved most about the extension was how seamlessly it blends with the older part of the home. Flawless! Gerard enlarged an existing study off the breakfast room to turn it into a sitting room that flows into a rear extension, and it’s impossible to tell exactly where old meets new. 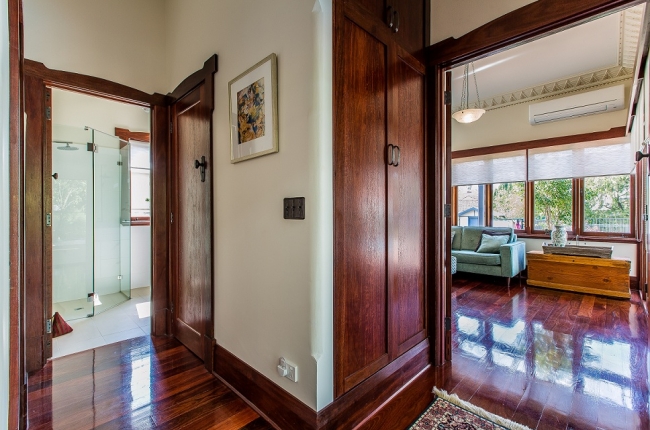 ABOVE: The attention to detail in the new part of the house is extraordinary. All the new architraves and window details were meticulously hand-carved by carpenter Jim Bouchet to perfectly match those in the old part of the home. Diana sourced the traditional light switches from Subiaco Restorations. 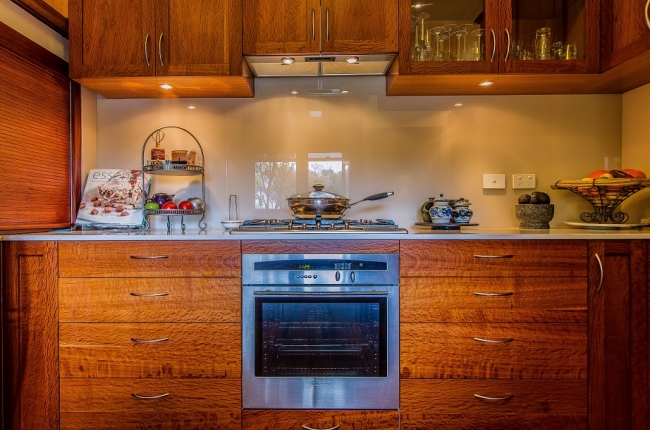 ABOVE: The Edingers renovated the kitchen in 2004, replacing an old one with wooden 3ply cupboards and lino floors, and now has she-oak cabinetry with reconstituted stone benchtops. 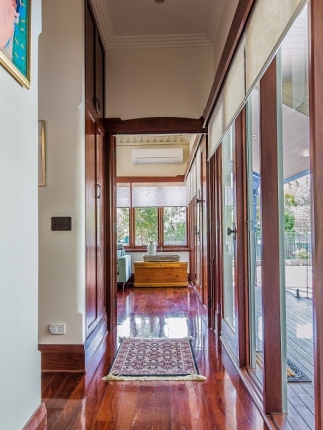 ABOVE: It was a big expense, but the Edingers used jarrah windows and doors throughout the whole extension - a feature that I think was truly worth doing. LEFT: Skylights to the new back veranda’s roof and traditional tongue and groove ceiling paneling, painted white, give the outdoor space a sense of space and light. 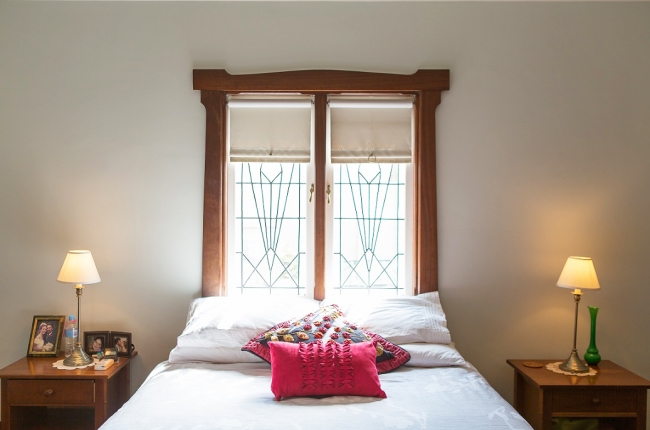 ABOVE: The main bedroom - so sweet.

A lot of attention was put into sourcing Art Deco-style fittings and the right floorboards, skirting boards and architraves for the addition so that they matched perfectly. “The challenge was making it look like it belonged,” says Nigel of the addition. Some assistance came from an unexpected source.

“Eliza and her maths tutor were sitting at the dining table one day while work was going on, and he was looking at the unfinished new part of the house,” says Malcolm. “He said, ‘Do you know what – I reckon I have exactly the same kind of skirting boards as you sitting in my back shed.’ He brought them over and they were identical. And there was just enough to do the entire extension!”

Do you live in Perth? If you do, I’m sure you would have had one of those unexpected ‘Perth is so small world!’ moments - when you meet someone and you discover they are surprisingly connected to someone else from your life. If the world has a six degrees of separation thing going on, Perth has three.

There is something vaguely familiar about the Edinger house to me and then I realise that one of the paintings was by Lindsey Pow, the artist father of my childhood best friend. “You have a Lindsay Pow painting,” I say in surprise.
“Yes, we have several,” says Malcolm. “Lindsay is my cousin.”
He starts pointing them out, and I start recognising some of them - artworks I haven’t seen in years but that I remember hanging in the Pow family house when I was younger. ABOVE: The old formal dining room the Edingers call the breakfast room. 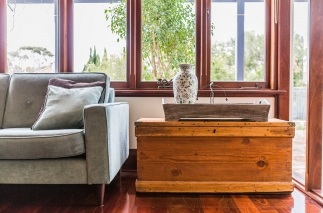 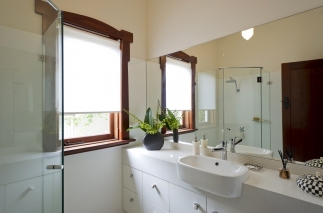 ABOVE LEFT: The Edingers loved the painted look of their lounge room ceiling detailing so much they had it replicated in the new part of the house in Eliza’s room. And the ceiling was hand-painted AFTER the cornicing went up! Dedication. RIGHT: With work done, Eliza has a bathroom of her own - and it’s a lovely one.

The paintings work so perfectly here and the house is beautifully finished and decorated. “All wife,” says Malcolm when I ask who did the interior design. “Diana knows just what she wants.”

Malcolm assisted up to a point and then was happy for Diana to take complete control of the look of each space. “When we got to the bathroom, I said, ‘Darling, I’m out’,” he laughs. And what a gorgeous bathroom it is – simple and modern but with Art Deco style touches, like the little black and white cabinet knobs. The Edingers and Eliza finally got the second bathroom they needed – as well as another lease on life for their gorgeous home.
Tweet

Retired woolbuyer Malcolm Edinger and his wife Diana, a midwife, their daughter Eliza, 18, and their cat.

A classic 1920s Art Deco character cottage with an extension done perfectly in keeping with the style of the original home.

olivia - Monday, October 8, 2012 at 9:52AM
ooooh i love the choice of basin in the new bathroom, the stained glass windows in the main bedroom and the outdoor details of skylights and white paint are so refreshing. what amazing attention to detail! beautiful!
Reply

Tracey Webb - Monday, October 8, 2012 at 12:11PM
What a cozy home and what a lucky teenage daughter to have such parents. This house reminds me of my parents old house in Mount Lawley. Very special.
Reply
Post a Comment
Thanks for your comment.