Picture waking in the morning and climbing to your balcony to check the surf winds before you head to the beach just 700m away. If this sounds like your dream way to start the day, I think you’ll like this little house.

Investment advisor Murray Jacob and his geologist wife Sara bought the 104-year-old weatherboard cottage in North Fremantle seven years ago. They now live with their adorable son Noah, 3, and their dogs, Molly the Maltese, poodle and Jack Russell mix and their Jack Russell x West Highland terrier, Mr Wilson. (“I just looked at him and he looked like a Mr Wilson,” says Murray. Okay). 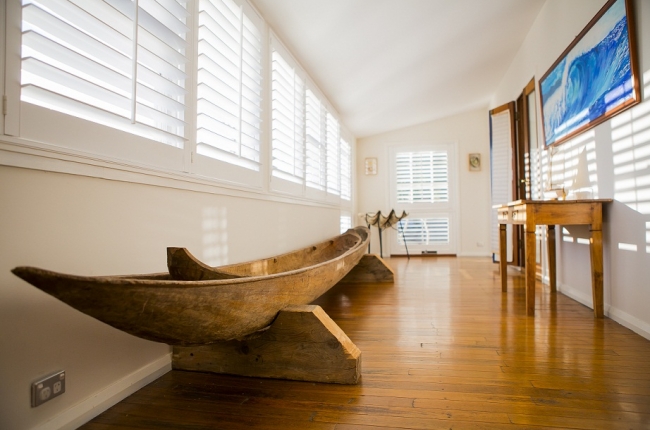 ABOVE: The original front veranda was enclosed by the previous owner to make a galley-style walkway that connects the living room to the bedrooms. It's now a gallery for the Jacobs' favourite possessions, like these dugout canoes, and is bathed in lovely golden light from the setting sun each evening.“My favourite thing about the house is the light,” says Murray. 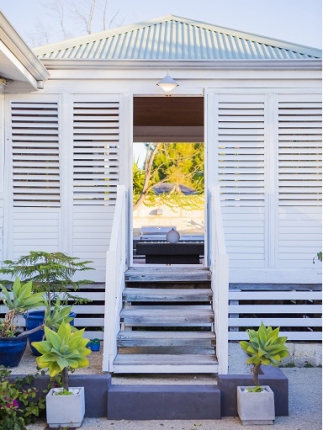 LEFT: A frangipani tree by the front veranda. RIGHT: The gazebo where the family like to unwind in the evenings. 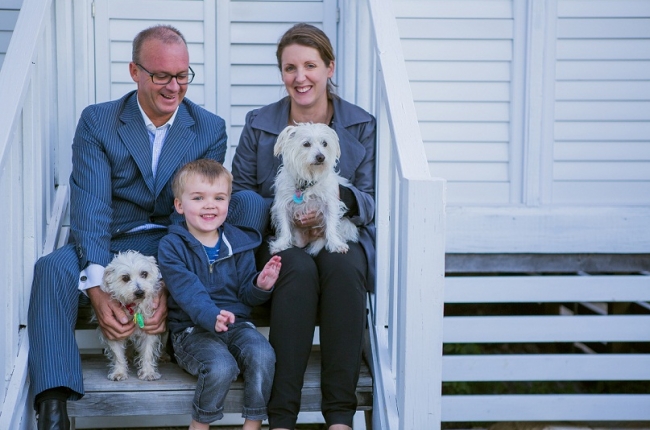 ABOVE: Murray and Sara with their gorgeous son Noah, 3, and their dogs, Molly (left) and Mr Wilson (right). 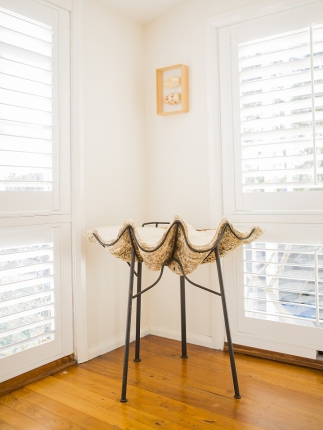 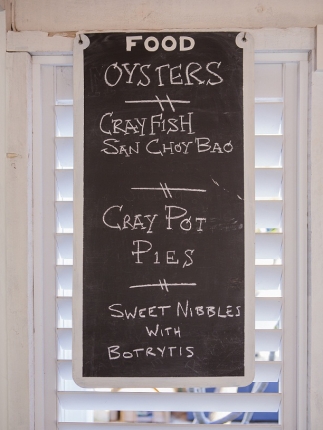 LEFT: How awesome is the giant clam shell? Murray bought it 15 years ago from the Fremantle Museum. When the Jacobs entertain they fill it up with ice, oysters and lemon wedges. RIGHT: A blackboard menu is a cute beachy touch in the alfresco area (and makes me feel hungry). 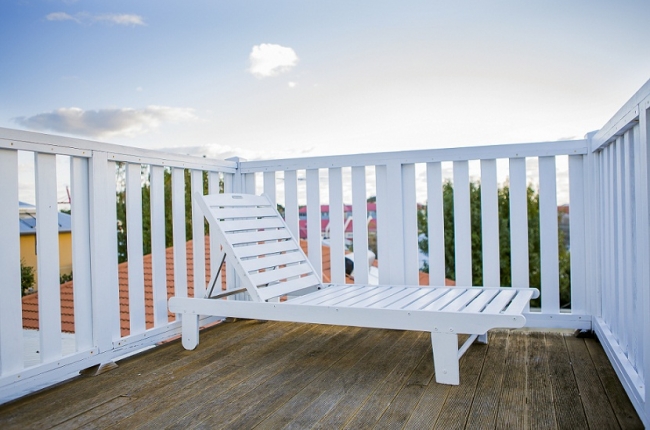 ABOVE: The little balcony that faces the ocean, where Murray checks the surf break. Photos by Marc Ash.

Murray says they liked the house the moment they saw it. “There were a lot of things I loved about it,” he says. The location was one, with the house in a lovely old street between the ocean and the Swan River with a balcony that offers a view across the neighbourhood to the ocean beyond. “I’m a surfer so I love that I can see the ocean from the house – I go upstairs and check if the wind break is offshore,” says Murray. It’s not surprising that Murray loves the surf and everything to do with the water- he grew up in the surfing community of Safety Bay, while Sara hails from the colder climes of England but loves warm weather and the ocean.

The house has a bit of an unusual story. Its previous owner, a lady called Jane, won Lotto and decided to spend her money doing up the little cottage she loved rather than buying a new house. Quite fittingly, this beachy cottage was renovated and extended by a team of ship workers from northern Europe.

Aussie and Kiwi readers will be familiar with the name HMS Endeavour, the ship commanded by Captain James Cook on his first discovery voyage to Australia and New Zealand which wrapped up in 1771. In 1988 it was decided to make a replica of the Endeavour to commemorate the Bicentenary of European settlement in Australia. Shipworkers with traditional skills passed on through generations were flown all the way from northern Europe to Fremantle build the new HMS Endeavour. When the Endeavour was finished, the men loved Perth so much they didn’t want to leave just yet so they started a building company called Men Overboard. “Their first big job was this house,” says Murray.

When the house turned 100, previous owner Jane sent the Jacobs a rather interesting letter. “She told us all of these things that had happened in the house,” says Murray. “She said the woman two houses down had actually been born in the house, and someone else’s great-grandfather had died here.”
Sara laughs. “We were a bit like, ‘Oh… that’s great’.”
Jane had known many people in the entertainment industry and also detailed in the letter were some of the people who had stayed in the house at one point or other – including musicians from The Violent Femmes and Sepultura, Kate Ceberano and comedy duo Roy and HG. 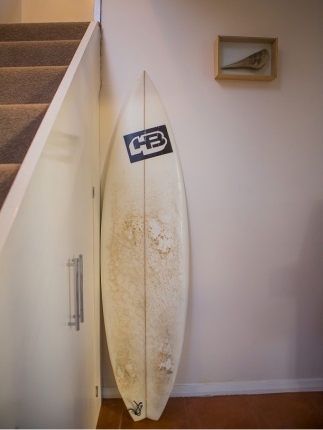 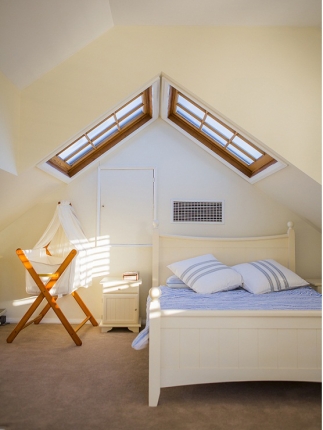 LEFT: One of Murray's favourite surfboards leans against the little staircase to the guest bedroom upstairs. RIGHT: White shutters and Oregon French windows, recycled from the old Fremantle Woolstores, feature through the home. 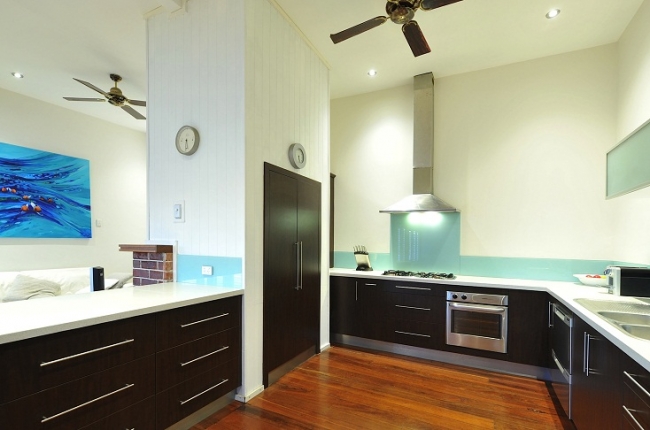 ABOVE: The kitchen was fully renovated by Kitchens by Design. “They were really good,” says Murray, who clad the central pillar in fibre cement boards himself to create a tongue-and-groove effect that goes perfectly with the beachy feel of the blue glass splashback and the white stone benchtops.

It’s one of those houses where you walk in and you can just tell that people have been happy here. The neighbourhood has a nice feel too. The Jacobs live on a friendly, tucked-away little street where everyone knows each other. Next door lives an elderly couple. When their dog passed away, they were reluctant to get another, but missed having a furry friend around. Now when Jacob and Sara are at work during the day, Molly and Mr Wilson spend the day at the neighbour’s house before heading back home for the evening - company for everyone.

Murray informs me that their street name, Letitia, means joy and also tells me that my name, Maya, means illusion. “It does,” I say, surprised, because no-one has ever said that to me before. Unfortunately, as I tell Murray, my mother did not name me after something so glamorous, but after a German comic book character, an overweight orange-haired bumble bee. (Thanks Mum). 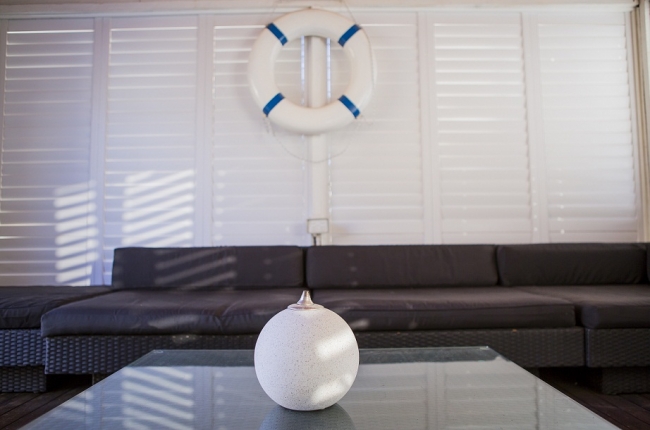 ABOVE: Bi-fold doors connect the kitchen to the gazebo, which can be opened up to let sea breezes through the home or closed up to make a cozy room for winter. 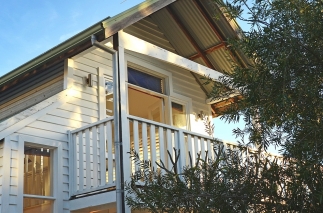 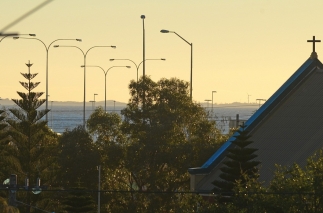 ABOVE: The little balcony off the upstairs guest bedroom, with views across to the sea. Its sloping ceilings and French windows remind me of Enid Blyton stories. It would have been my perfect bedroom as a teenager. At night-time boys would have thrown stones at my window, and I would have snuck out the balcony and down the tree all romantic-like before running down the street in a white nightgown I don’t own. I’m kidding. No boys came within a yard of me when I was a teen. And I can’t climb trees for shit.

Moving on, while the cottage is intimate, there is a sense of space – and of retreat. “There are all these little spots you can get away to,” says Murray.

The old veranda to the house has been enclosed and now links the open-plan living area to the bedroom wings. It’s a perfect spot for displaying beach-themed mementoes, like the Jacobs’ giant clam, and two hand-carved, dugout wooden canoes. Murray has always travelled to Indonesia once a year to surf and bought these two dugout timber canoes from locals in Sumatra. In October 2010, the Mentawai Islands, off the coast of Sumatra, were hit by a devastating tsunami. More than 500 people died and around 11,400 were left homeless. When he returned, Murray found out that the old man who had carved one of his canoes had sadly disappeared, and the villages were a mess.

Murray decided to raise funds for the village through SurfAid, a fundraising initiative that aims to provide healthcare facilities, fresh tap water, good sanitation and other amenities for people in the island chains off Sumatra. Murray decided to paddle one of his Sumatran canoes from Perth to Rottnest Island, a rough 20km journey (for non-Perthites, yes you do need to keep a bit of an eye out for sharks!) He did it in March last year and raised $5000 for SurfAid to help them improve their villages. You can read more about SurfAid and their amazing work here.

Now leaving their lovely little house, wanting a place with more garden for active little Noah, the Jacobs say they will be sad to move from their street. “I love North Freo,” says Murray. “It has a really nice community feel and being so close to Cottesloe you get the best of both worlds.” 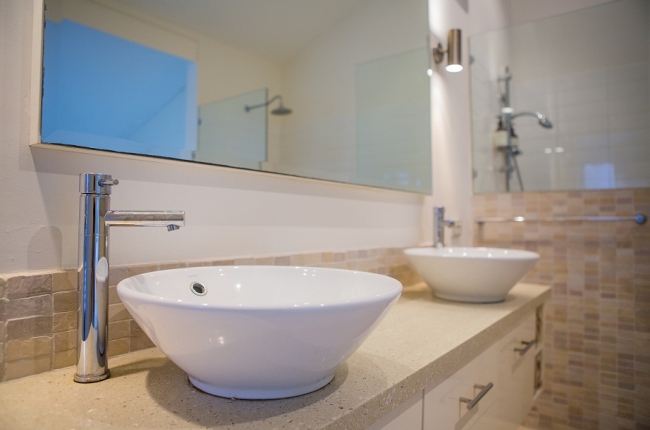 ABOVE: The Jacobs renovated the bathroom with WA Assett – The Bathroom Renovators. The benchtop is a reconstituted stone set with tiny fragments of pearlescent sea shell – a perfect nod to their beachside location. 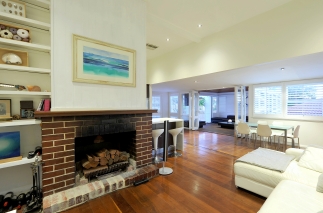 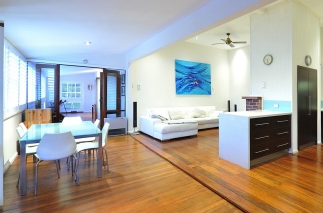 ABOVE LEFT: The main bedroom has a relaxing feel. RIGHT: The living area and dining.

ABOVE: Steps from the gazebo lead to one of the lovely little courtyard gardens

wendy - Sunday, November 18, 2012 at 5:00PM
i saw this property advertised a month ago but wanted to find out if it is still for sale? i have searched on realestate.com but couldnt find it, thanks wendy
Reply

Maya - Monday, November 19, 2012 at 10:25PM
Hi Wendy, Murray just emailed me and it is under offer. I think it went quite quickly!
Reply
Post a Comment
Thanks for your comment.