“Renovated to look un-renovated” could be the way to sum up the theme behind this project – a back garden stable turned into a laundry for the owners of a grand old Fremantle residence so beautiful it made me seethe with jealousy a bit.

While the two-storey, heritage-listed Victorian home had been renovated substantially in recent years, the 1890s-built home had no proper laundry and the owners were keen to have one (apparently they come in handy sometimes). 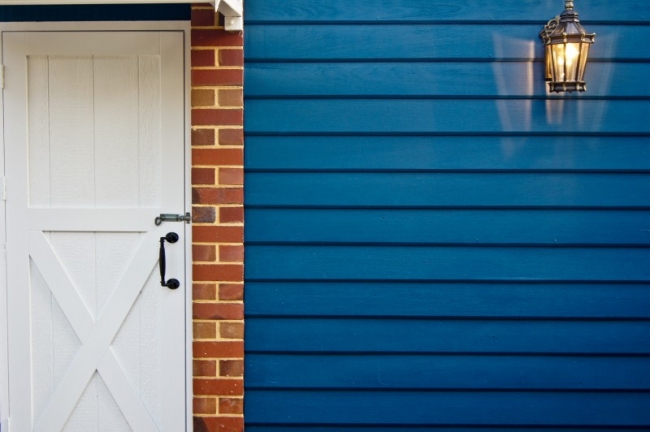 OUTDOOR LIGHT: This gorgeous traditional-looking light fitting was from Beacon Lighting, a store Ashley loves (I do too). “A lot of lighting stores are very expensive, but they are reasonably priced and have a nice balance between traditional lights and new contemporary ones,” he says. 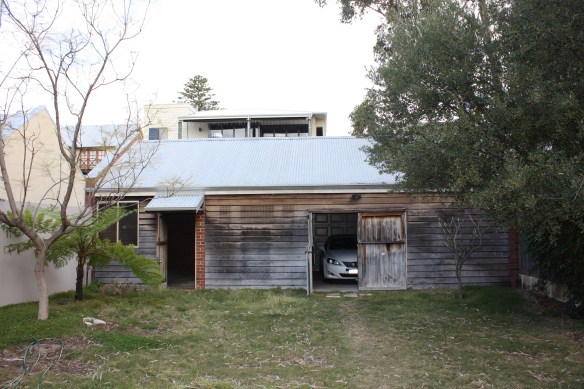 ABOVE: The stable before. 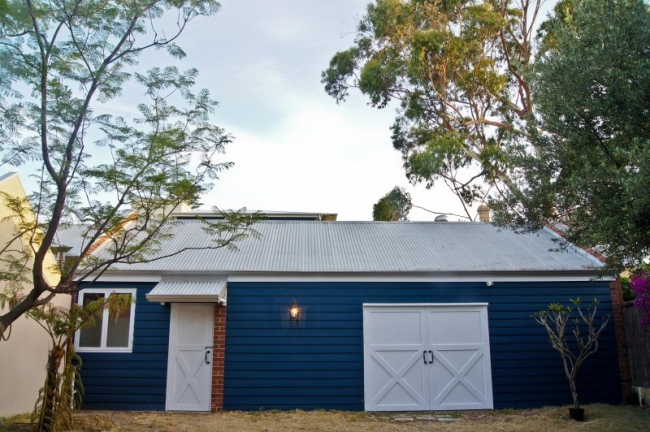 ABOVE: The stable now. 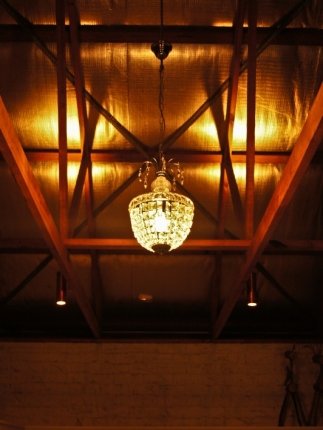 THE CHANDELIER: The owner fell in love with the chandelier and carefully kept it in storage until it was ready to use. “The 1940s-style chandelier really completes the look,” says Ashley. “Again it’s something that the owners might have taken out of the house one time and put out here.” Ashley bought the large table for folding laundry from Recollections, a company that sells home renovation and building products in traditional period styles. 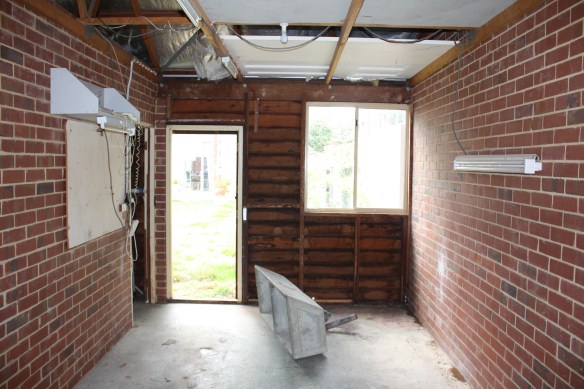 ABOVE: The space as it was. 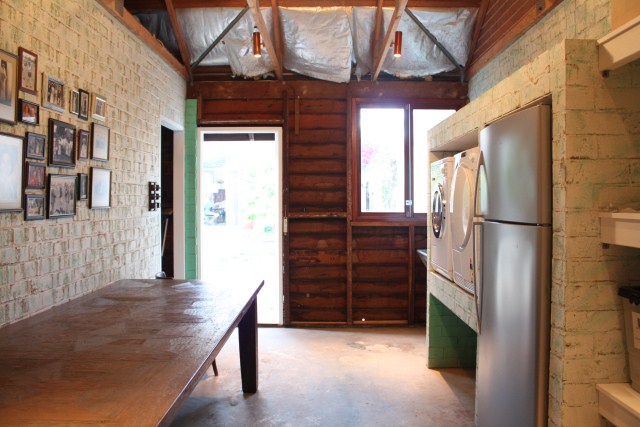 ABOVE: The wall by the door and the ceiling were left untouched to add to the rustic feel. Rather than concealing the washer and dryer, Ashley made them clearly visible, building a shelving unit from bricks. “To aid the functionality I raised the washer and dryer and tied it in with the fridge,” he says. 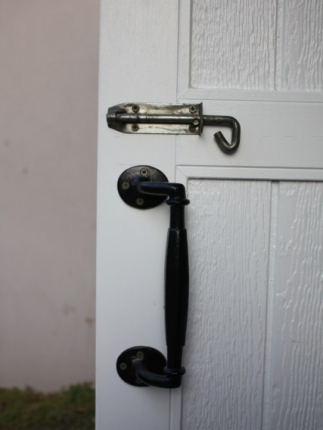 They called in Belle Maison designer Ashley Peverett who revamped the stable at the bottom of the garden to turn it into a laundry . Years before the original stables had fallen into bad condition, but being a heritage-listed residence, they needed to be rebuilt as they were. Sitting at the bottom of the garden away from the main house, part of the building was used as a garage, the other part as a storeroom. It was this part that Ashley turned into a laundry.

“The owners’ first thought was to make the laundry look very contemporary – more in keeping with the fit-out of the rest of the home,” says Ashley, who encouraged the family to go with something more rustic and traditional to tie in with the history of the stables. “I was drawn to the size of the space, the timber cladding and the paint spilled onto the floor to create this unique laundry space. It’s not often that you can get a space that has high functionality as well as high aesthetics. A laundry can be a showpiece of the house and I think in a Federation home you can do something really crazy like this. It’s unexpected.”

In a time when I find many renovations strip homes of all their cute little imperfections and original features, sanitising them to a point where they lose their character and charm and feel a bit clinical and cookie-cutter, it’s nice to see a project like this. Ashley gave the ordinary brick walls a weathered, aged look with layers of paint and sanding, left the paint-splattered concrete floor untouched and the ceiling beams exposed, and incorporated recycled elements. It’s rustic, a bit unfinished and raw, just as you might imagine a back yard laundry to be. Ashley says it will look better the more it gets used as in time, as the owners add more and more things, the laundry will get that layered look of old country family houses where the owners have lived there for decades.

“We’re really happy,” the mother of the family told me warmly. “I love my laundry, it’s beautiful.” The owners are having a wedding out in the garden soon, and what a nice backdrop the freshly painted stable will be. 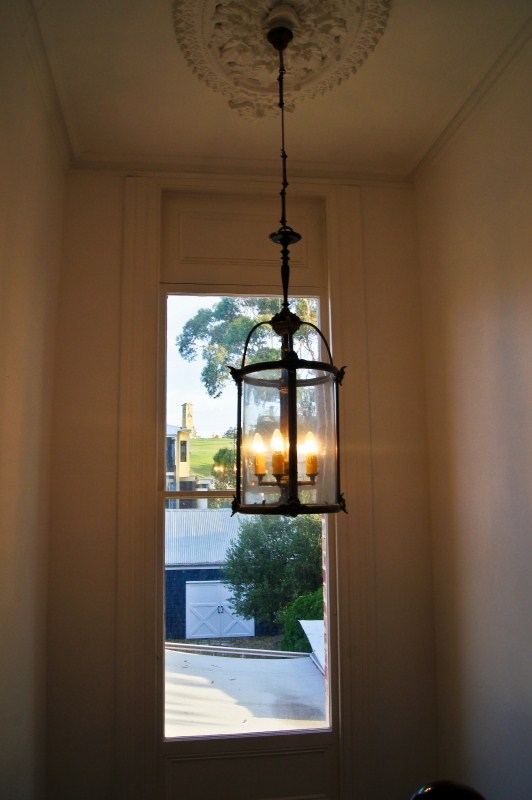 ABOVE: I love this shot Simone took of the laundry from inside the house. In the background is Fremantle's gorgeous Monument Hill with ocean views. We used to roll down it when we were kids. 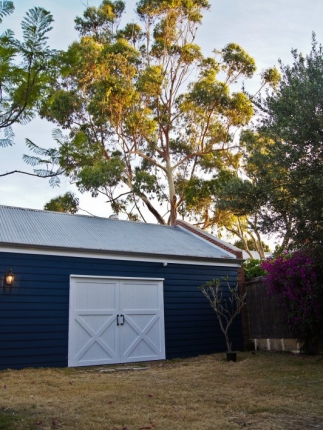 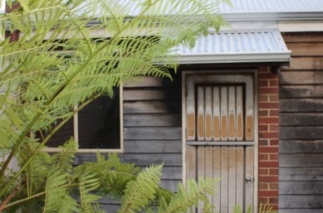 A STABLE AT THE BOTTOM OF THE GARDEN: The stable now and the stable before paint and new doors. I love horses – I was an absolute horse nut as a kid and a teenager. I would have LOVED to have a stable at the bottom of my garden even if it didn’t have a horse in it. Secret - when I was a teenager I even painted one of my parents’ garden sheds red with white stripes to make it look like a barn. 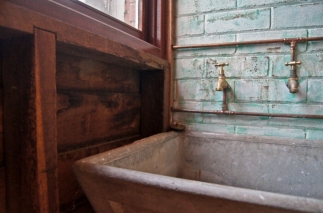 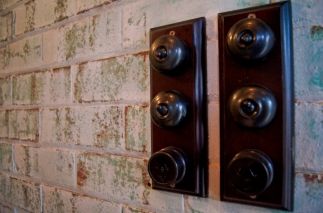 ABOVE: A new custom-made jarrah window replaced the shabby aluminium one. “The old trough we got from a salvage yard,” says Ashley. “We purchased the old copper taps and asked the plumber to do all exposed plumbing in copper.” The secondhand Baker lights were from Recollections and give the laundry another perfect yesteryear touch. ABOVE: Looking back at the old limestone house from the laundry. 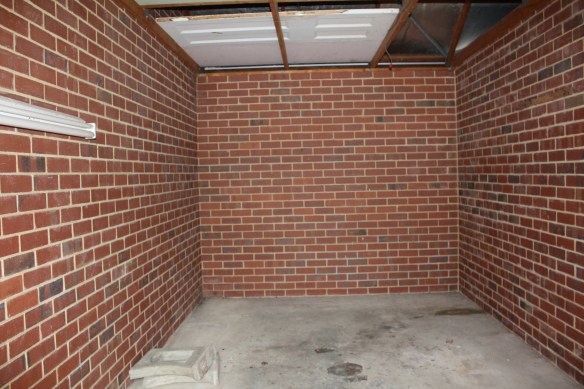 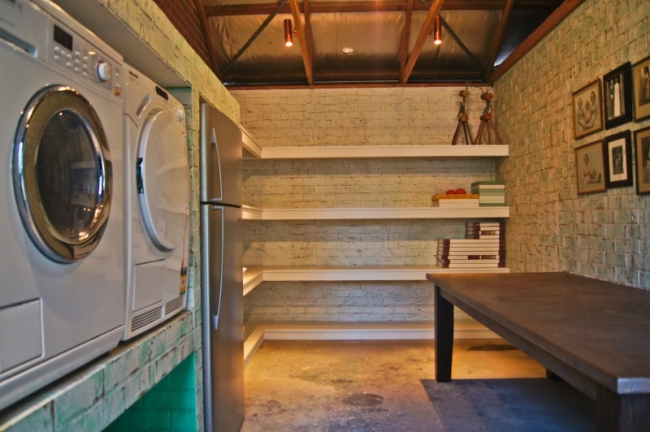 THE WALLS: “The ageing of the walls would be my favourite feature,” says Ashley, who wanted to give the walls an aged, textured look as if they had seen several different cans of paint over many decades. “First we did an undercoat in white, then painted them in Dulux Peppermint Green, a colour used a lot in the 40s. We then painted the walls again and sanded them with a belt sander, then put brown paint and water in a spray bottle and sprayed the walls all over. We purposely left some bits untouched to give the feel that they might have been just forgotten.”’ PHOTO WALL: “I wanted to create the feeling that the things in the laundry had accumulated over time in here,” says Ashley. “I suggested to the owners that they hang up old family photos, which people often have in drawers or cupboards forgotten about.” The owners gave him their old photo albums to take old family portraits from, now given a new lease of life as a beautiful feature wall. Some are in their original photo frames, others Ashley picked up from Big W – and look the real (old) deal here! 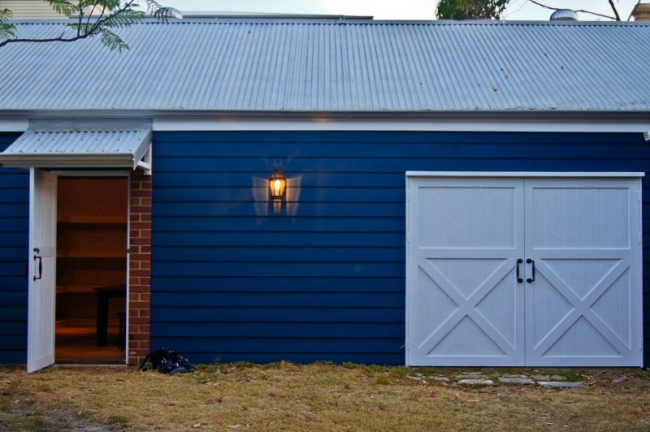 Posted: Monday, November 26, 2012 in Before & After .  Tagged: before and after , makeover , Perth , quirky , renovation , shabby chic , Western Australia
1 Comment
I love receiving your comments!