What do you do when you really want to rent an awesome place in a great location – but the lease is just way too expensive? You might consider getting a flatmate or two to share the cost of rent. And that’s just what Ambassador Home designer Greg Baker did – but in the form of Angove Street Collective.

On Friday one of the newest shops in Perth opened its doors, and Meghan Plowman and I went to snap some photos and find out what it’s all about. Angove Street Collective is the brainchild of director and designer Greg Baker, who you would know from his work founding Ambassador de Buenos Aires and co-launching Baker & Shuhandler before that. 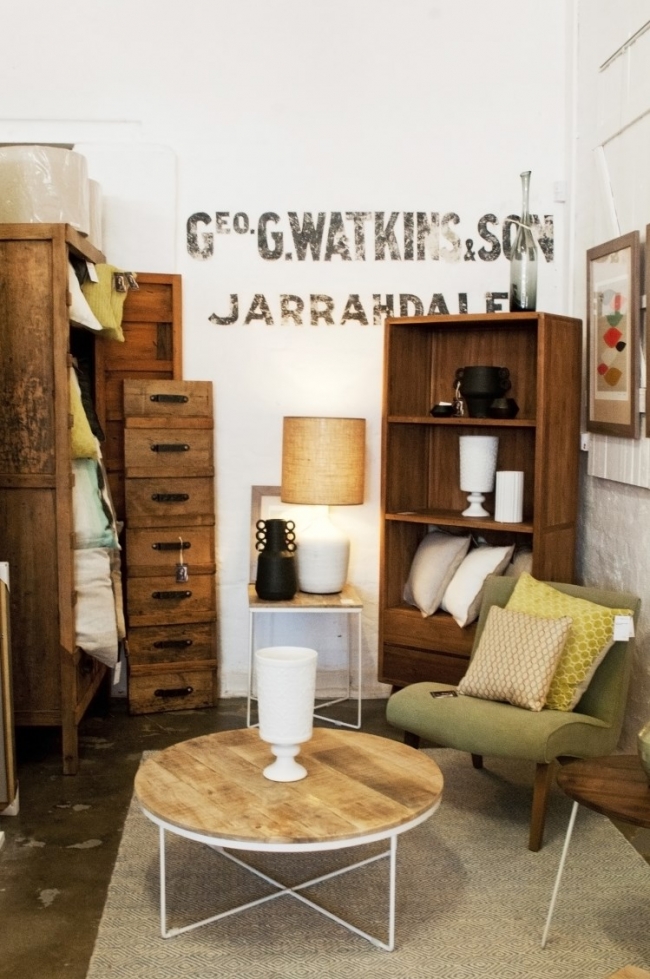 ABOVE: Part of the lovely old signwriting Greg uncovered while peeling paint from the walls. All styling and photography Meghan Plowman of The Orchard. 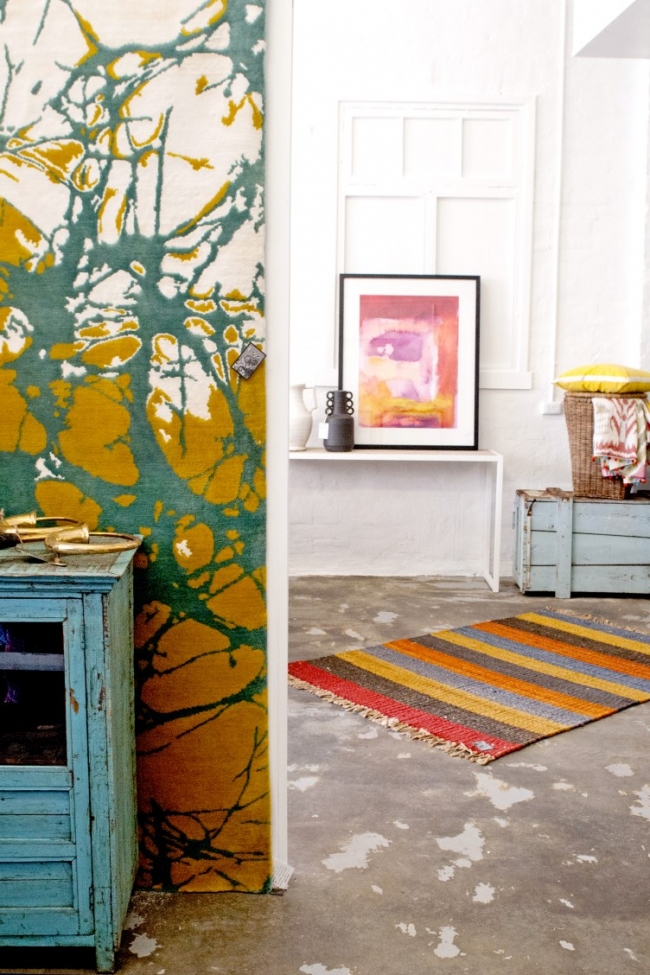 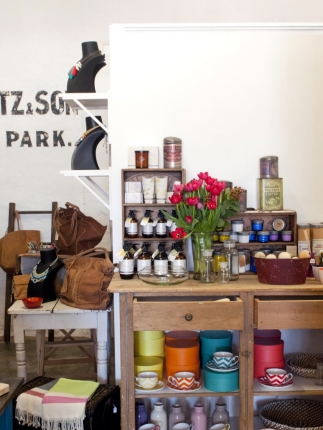 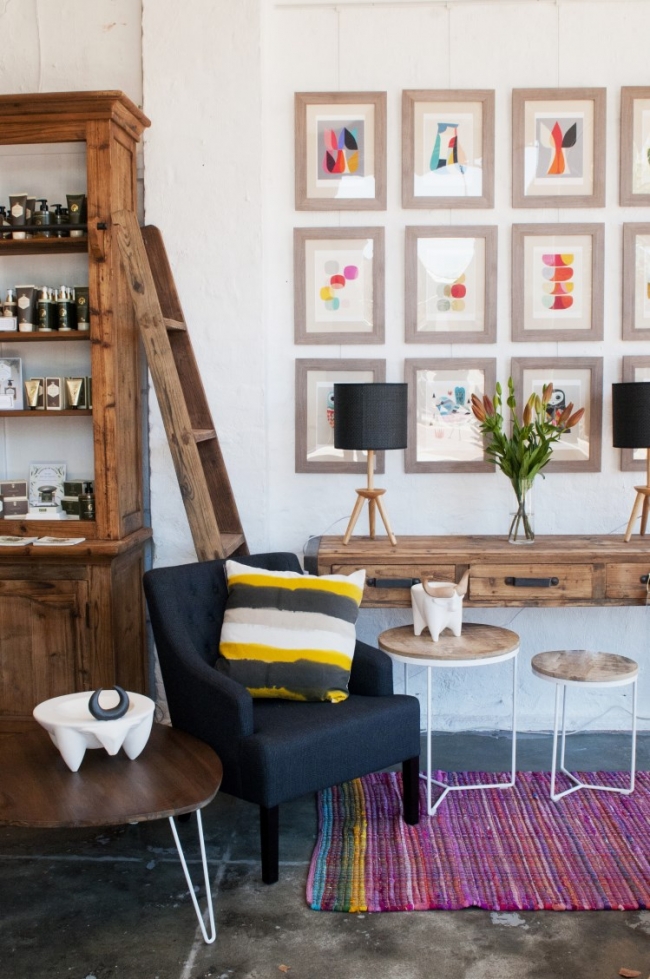 ABOVE: I liked these colourful (and affordable) prints. Rug from The Rug Studio, Flinders round coffee table from Ambassador Home. Styling and photography Meghan Plowman of The Orchard. 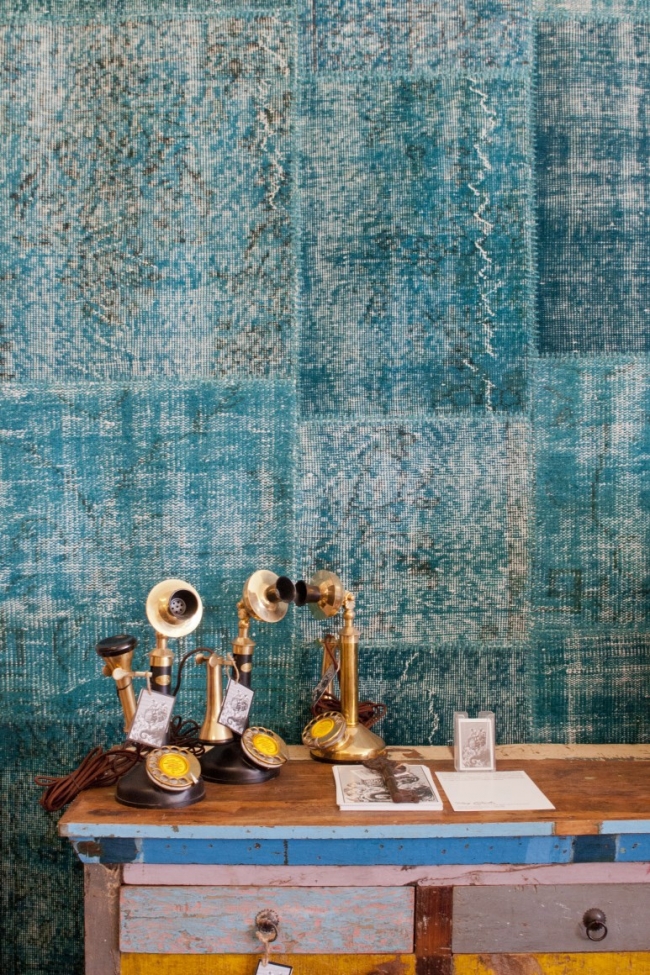 ABOVE LEFT: Vintage telephones, console from the Ambassador range, rug from The Rug Studio. Styling and photography Meghan Plowman of The Orchard. 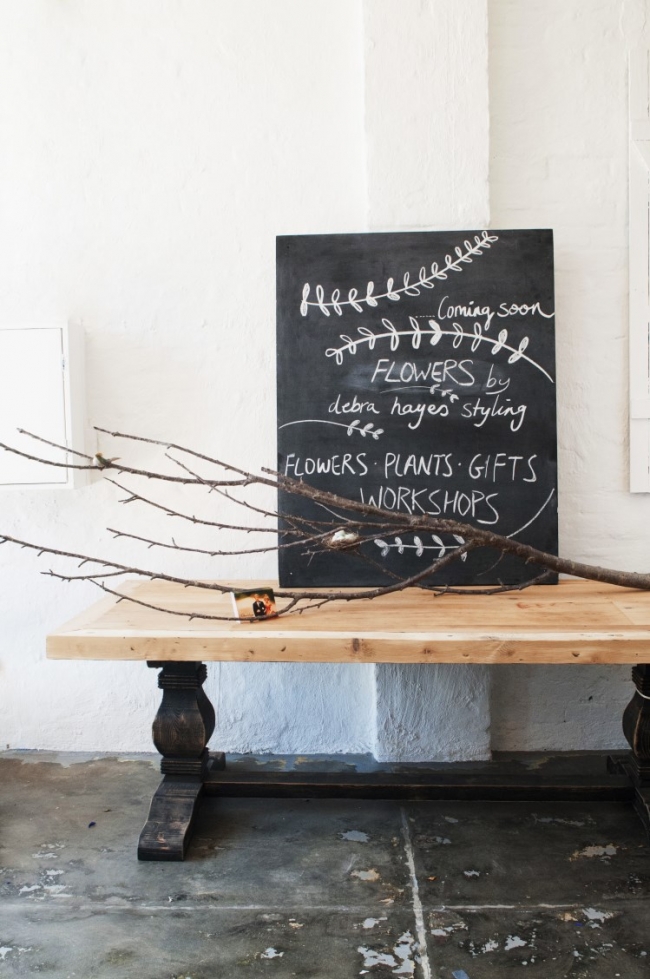 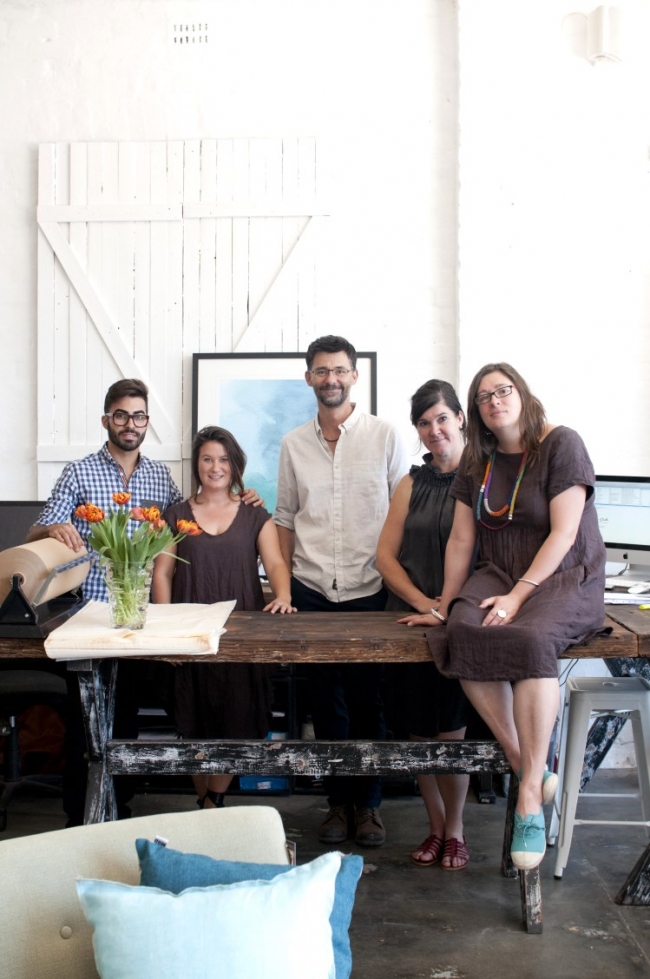 Greg had a vision for ASC to be a concept store - a collaborative effort with numerous small retailers sharing a space under the same roof. As Greg put it, the place is kind of like a department store, one that showcases small retailers, well-designed goods, furniture, textiles, homewares, lighting and quite a few quirky bits and pieces thrown in. Ooh, and there might even be coffee soon. It’s a very cool idea.

After running Ambassador de Buenos Aires in a sleepier end of Leederville for years, Greg wanted to try his hand at a new location with more bustle. But the costs of renting such a space in Perth were astronomical. He also realised he really wanted to collaborate with others in interior design – partly due to his tendency to procrastinate on his own! “I was looking at places that were really expensive, and it blossomed from there,” he says. “I thought, how can we share the cost of a great space that had a good location and not pay a fortune for it? I also really like working in a communal environment. If I’m on my own, I procrastinate! I thought, wouldn’t it be nice for little retailers to combine forces and work together?”

The idea quickly took off - Greg got together with once-customer, now-friend and Pekho owner Buffy Murray, talked to fellow retailers he liked, and it was only a month or so before before they had a starting stable of five small retailers. And the idea has worked so successfully already they want to add another five or six more by February. The store works on a membership principle, with Greg overseeing and only gently curating the collections on show – although it’s an eclectic mix of wares from Pekho, Ambassador Home, The Rug Studio and work from numerous artists, here it all comes together perfectly. 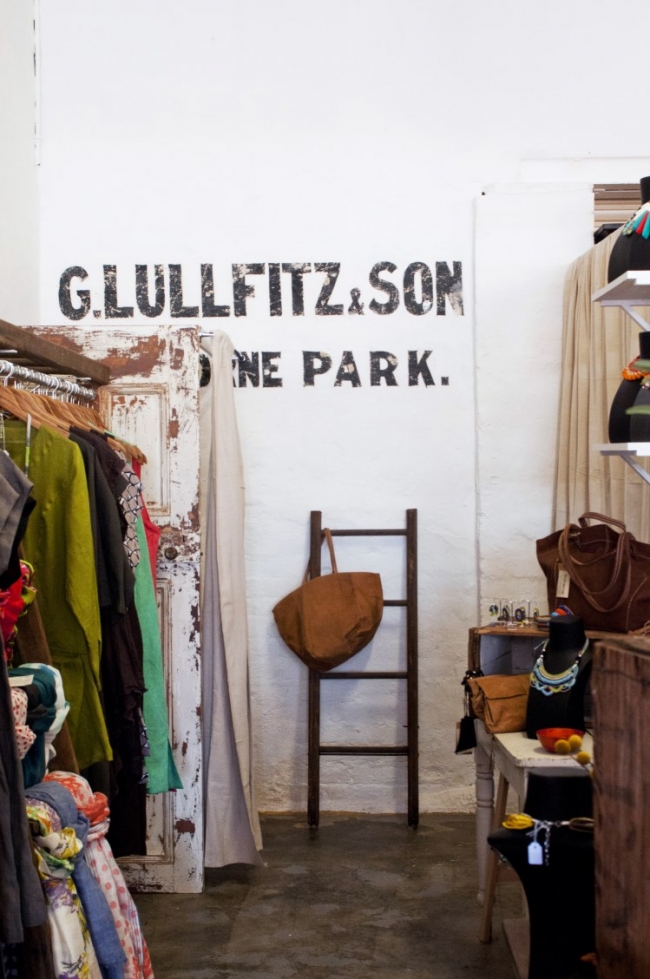 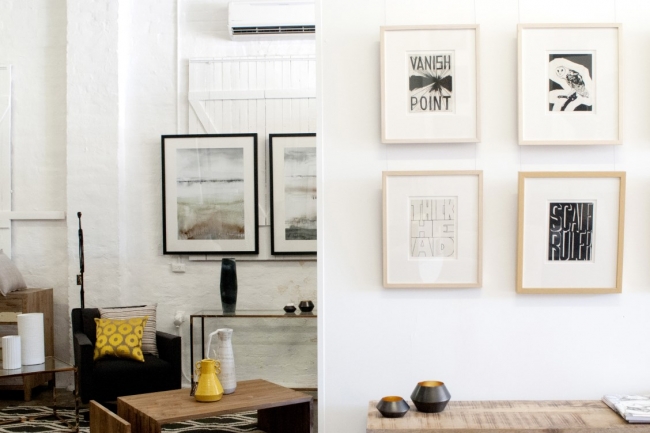 ABOVE: The store acts as a sort of gallery space for Perth artists and creators with one of the Angove Street Collective members being Turner Galleries. One of the artists they represent is Matthew Hunt and on this wall are some of his framed prints. All styling and photography Meghan Plowman of The Orchard. 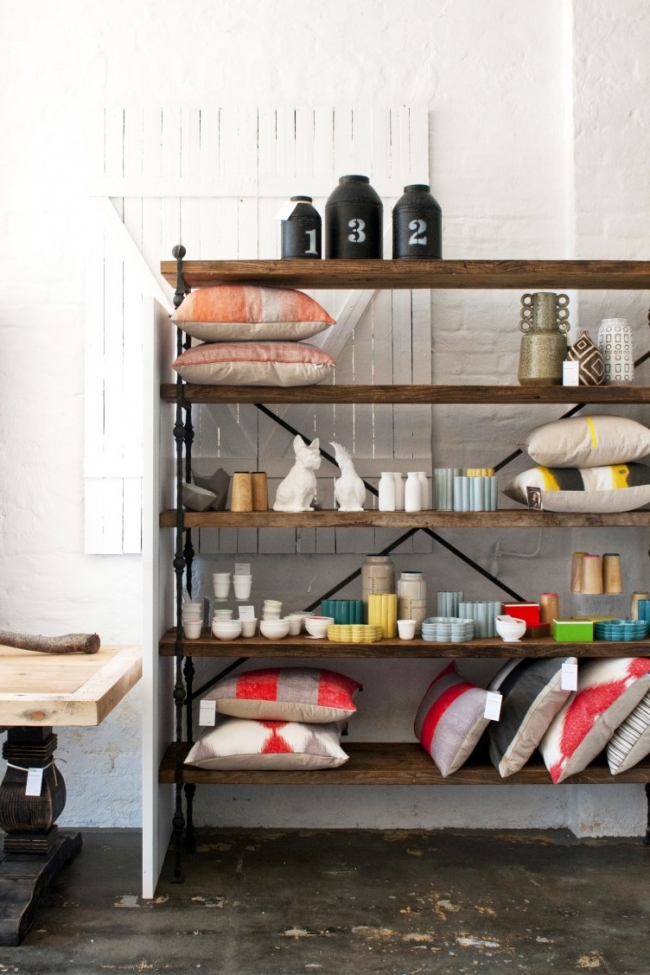 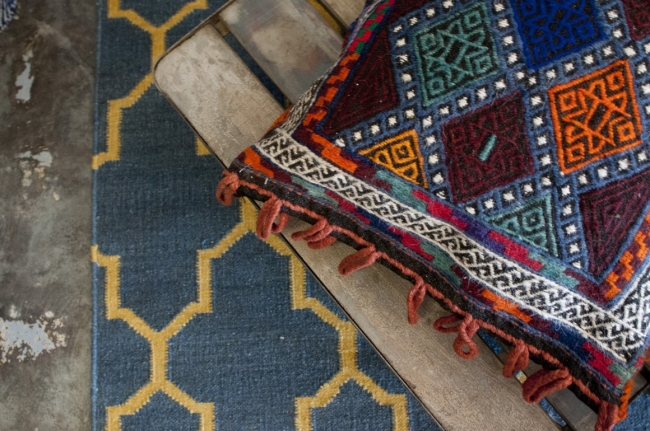 SWOON! This rug from The Rug Studio, that pillow. Both would look veryyy good in my house... well Mr Nerd did ask me the other day what I wanted for Chrissy. Polished concrete floors wouldn't hurt either. Styling and photography Meghan Plowman of The Orchard. 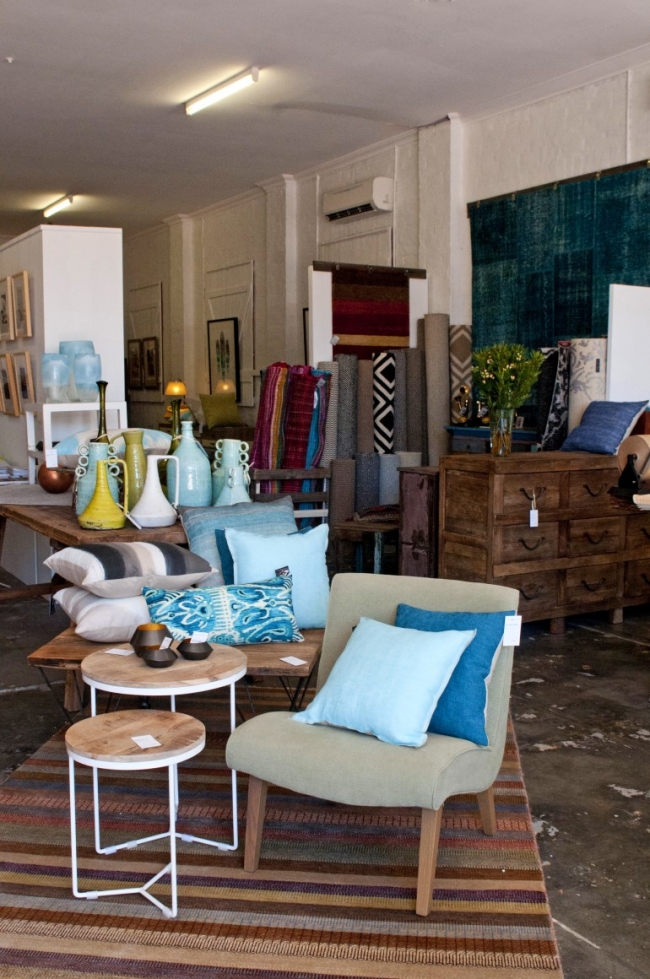 Finding a great rental space was not too difficult. The old warehouse Greg found on up-and-coming Angove Street was thought to have started off life as a marketplace meeting spot in the early 1910s. It later became a motorbike pit and functioned as such for years until Greg and his team gave it a revamp, painting the red, yellow and blue walls Baker's White.

It was while Greg was peeling off layers of old paint from the shop’s back walls that he made a gorgeous discovery – the store’s original vintage signwriting and the names of the original owners, Lullfitz & Sons. (The Lullfitz family later started Lullfitz Nursery).

Now there’s gorgeous hand-lettering at the storefront, too. Greg’s dad (famous for helping his boundlessly energetic son with his renovation projects!) painted the storefront. “Dad used to be a signwriter,” says Greg. “I dragged him out of retirement and made him paint the sign at the front! I wanted an old-fashioned sign like from a boutique department store and love how it looks.”

Inside, it feels more Melbourne or Sydney than Perth, and with its white walls and beautiful pieces begging you to browse, you can’t help but slow down mentally. “It has a really nice Fremantle thing to it,” says Greg of the shop. “It’s like a gallery and quite sophisticated.”

Greg says he has been chuffed by the response to the shop. “Everyone who has a coffee across the road wants to come in,” he says with a grin. “I feel really overwhelmed by the response. It’s such a friendly street – while we were setting up all these store owners popped in and said, ‘We can’t wait til you open!’ ” Well they’re now open - grab a coffee from across the road and add this place to your to-check-out list. Maya x 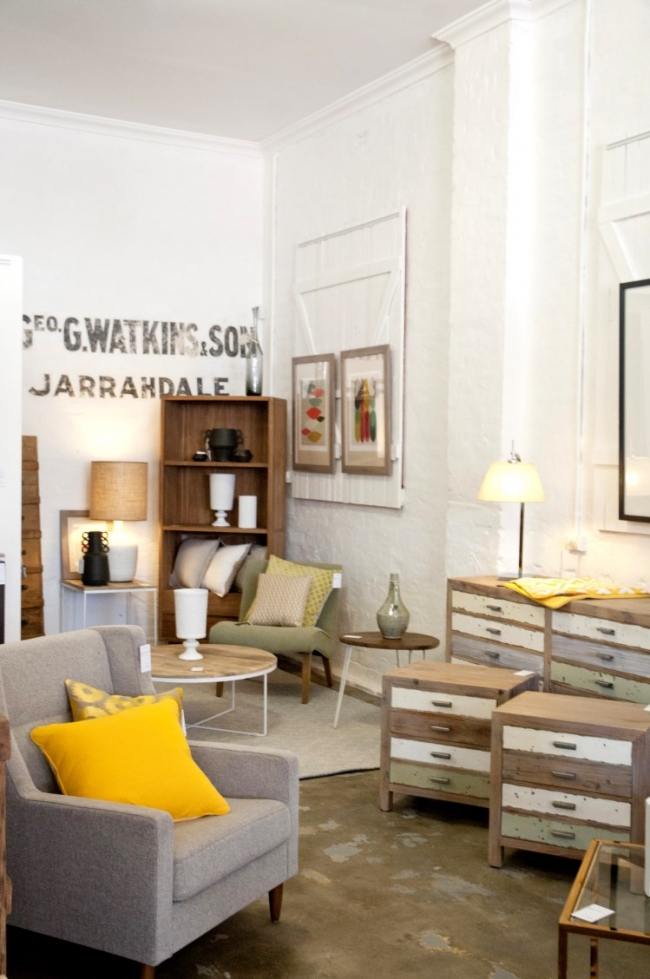 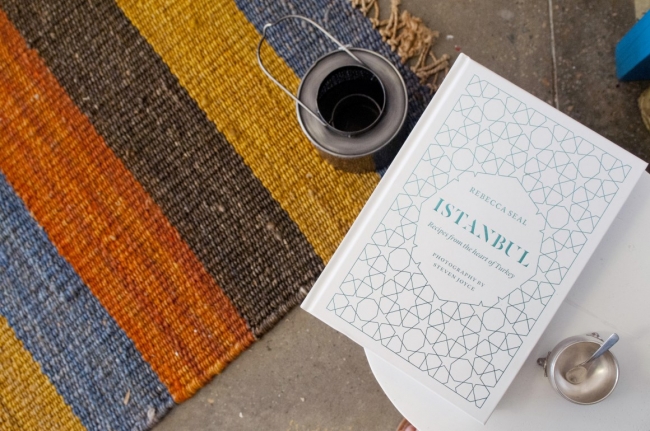 ABOVE: A colourful rug from The Rug Studio warms up the concrete floor. 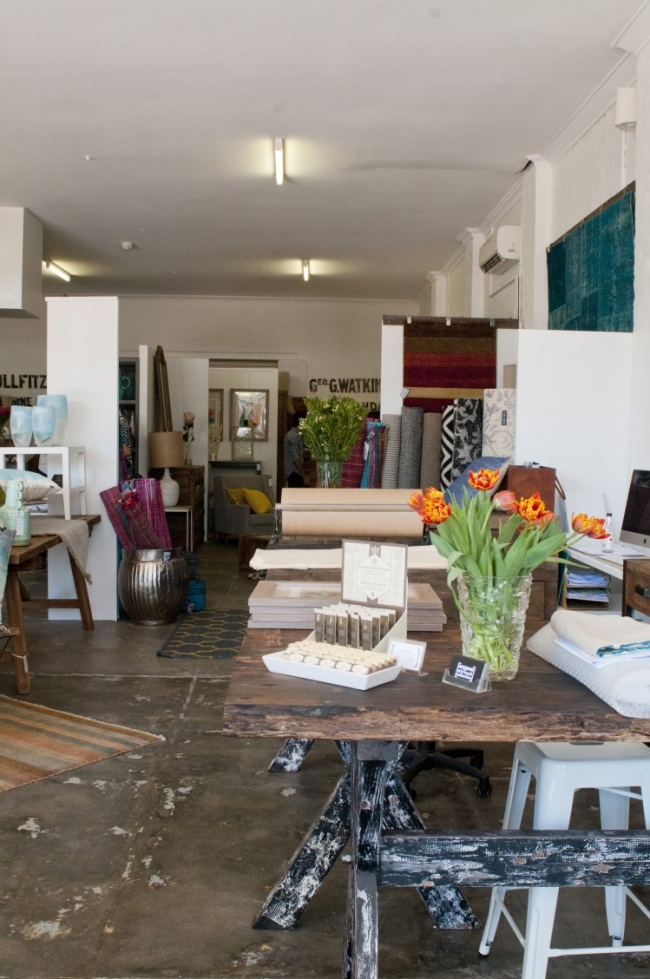 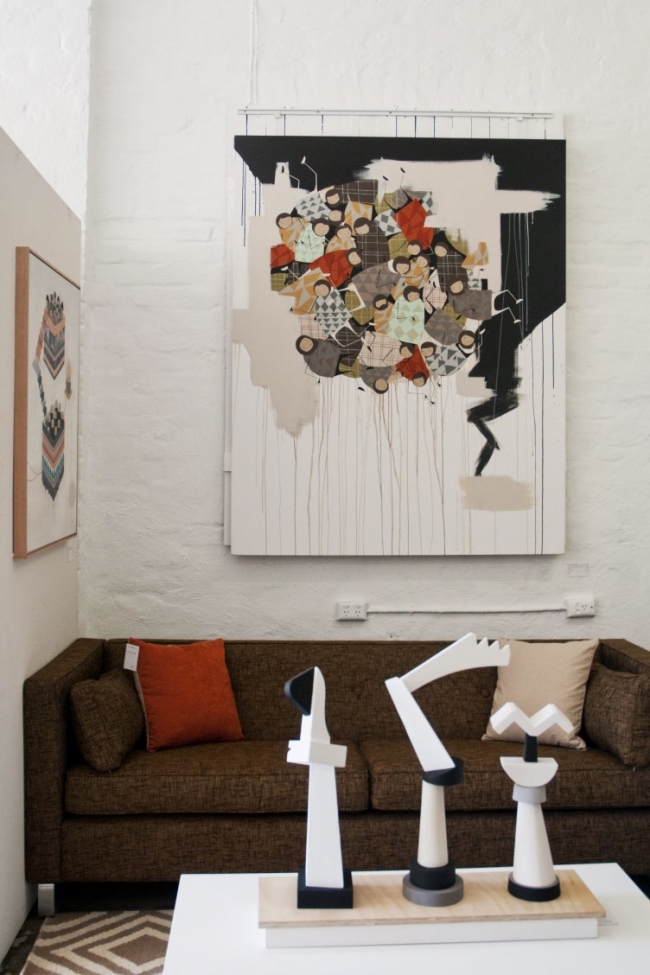 ABOVE: The store showcases works from artists represented by Turner Galleries, including these works by Kyle Hughes-Odgers. Styling and photography Meghan Plowman of The Orchard. 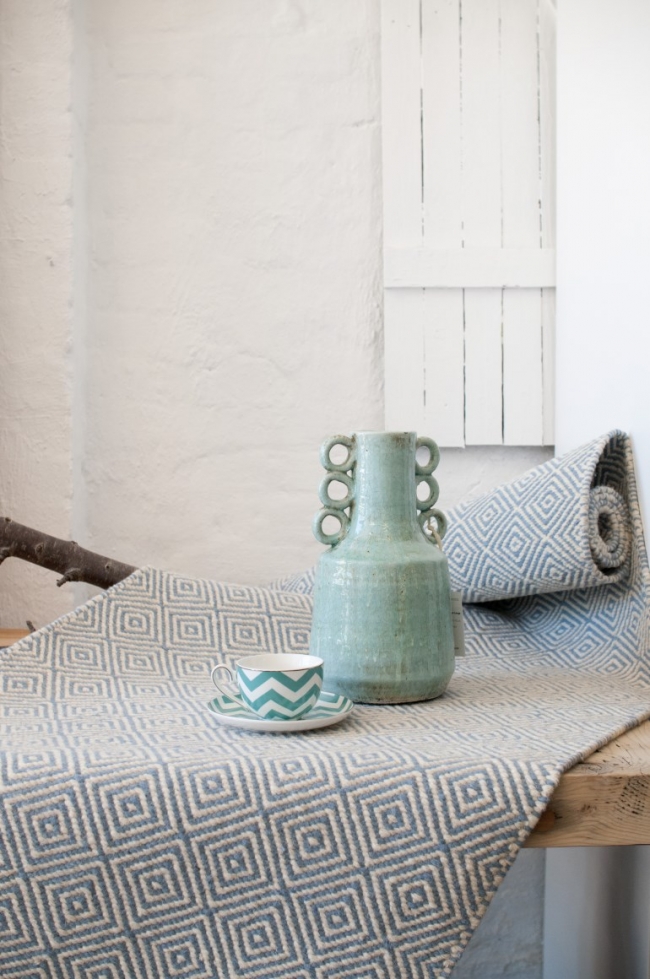 ABOVE: Looking for a lovely Christmas gift? Here's some of the ASC team's picks: this lovely teacup from the Pekko range, this beautiful rug from The Rug Studio, and this Aporto Aqua vase from the Ambassador range - gorgeous with or without flora. Styling and photography Meghan Plowman of The Orchard. 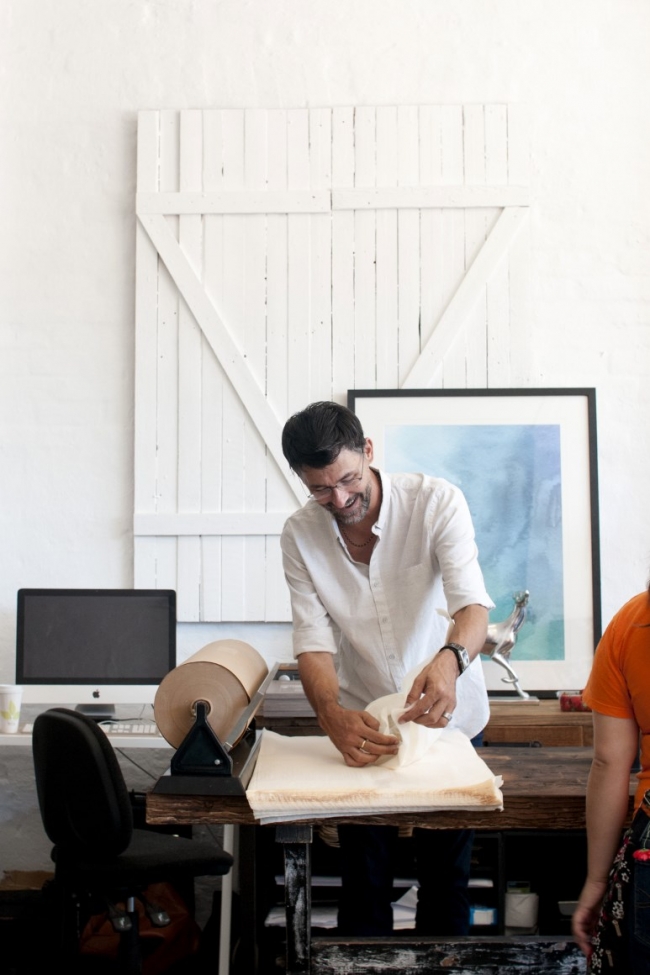 ABOVE: I've heard Angove Street Collective director and founder Greg Baker described as "the nicest guy in interior design" and I think this could be true! Pictured here having a laugh with a customer on the store's opening day. Styling and photography Meghan Plowman of The Orchard. 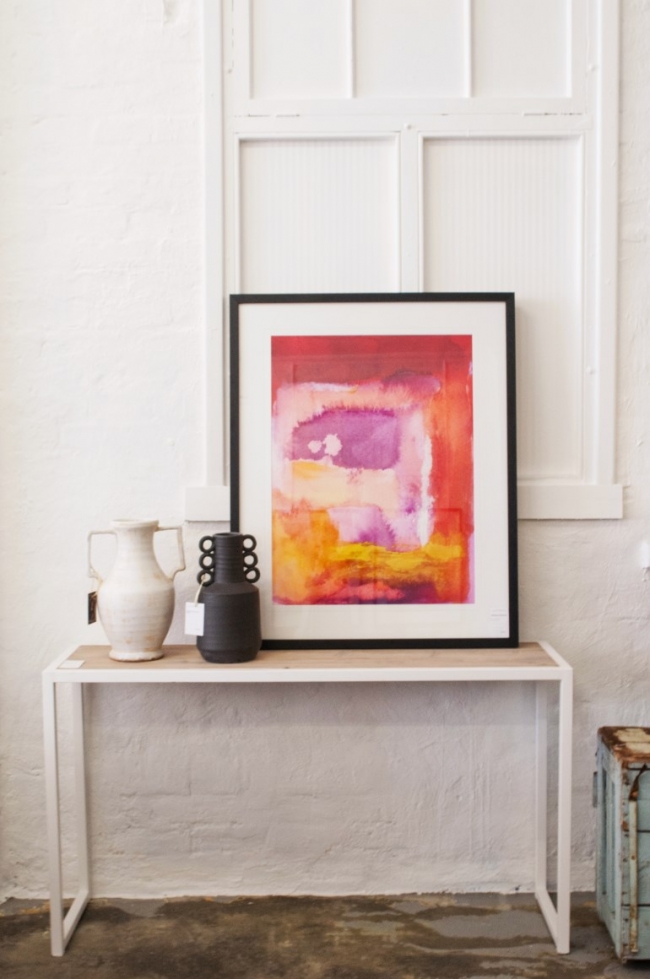 All styling and photos Meghan Plowman of The Orchard.

Fabrics and rugs on offer at ASC.

Angove Street Collective, a collection of wares, artworks and textiles from small retailers all under the one roof. With future coffee bar!

Thought to have st

Grab a coffee and have a browse. You’ll find something (or five) to add to your Christmas want list!

Maya from House Nerd - Tuesday, November 12, 2013 at 10:13PM
Instore coffee is always a great idea! (Oooh you should also check out The Tenth State in Crawley - amazing coffee spot and awesome homewares/gifts store, one of my faves!)
Reply

Suzie Price - Wednesday, November 13, 2013 at 2:51AM
Great concept! Sounds like the way of the future especially for small retailers. Would love to see something like this in Fremantle, I'd love it if Freo could make itself known as the creative Mecca of WA! Will definitely be heading to Angove st for a look see.
Reply

Maya from House Nerd - Wednesday, November 13, 2013 at 9:45AM
It's such a brilliantly clever yet simple idea, you wonder why more people haven't done it already. I would also love to see more of it. And Fremantle is so close to my heart - I grew up in and around Freo and think that it really could become the creative mecca of WA, especially with all that history and the gorgeous old buildings. You should check out what they're doing to the old Myer building if you haven't seen already! (It's now called Myre). I have a dream of one day having a little House Nerd office in Freo :)
Reply

Suzie Price - Saturday, November 16, 2013 at 12:25AM
I'm a Freo gal too, Maya. I work in a fabric and yarn shop and so, I see a lot of the beautiful thing that are being made by so many creative people but there are few options for them to make a living from their talents. This could be a great way to keep over heads down and make their wares more marketable. I'd love to be apart of something like this myself.
Reply

Carla Da Costa - Tuesday, November 19, 2013 at 8:37PM
Oh I am so going here when I'm back in Perth in December. Looks amazing, and so close to our house that we now rent out. Such a great area in North Perth!
Reply

Maya from House Nerd - Thursday, November 21, 2013 at 8:06AM
I love North Perth! Always been a lovely area but it's just getting better and better.
Reply

Kate - Saturday, November 23, 2013 at 1:48PM
I went to check it out today. Greg and the team have done an amazing job. Bravo!
Reply
Post a Comment
Thanks for your comment.