If we were playing word association and I said to you 'antique store' - what would spring to mind? 'Dark'? 'Old'? 'Musty'? Trust me when I say that Perth's freshest newcomer to the antique store scene is anything but. 'Cool' would be a more apt way to describe this corner store of treasure troves, opening tomorrow in Fremantle!

Its name is Second Empire Antiques, and it’s the little sister (the one with long hair who goes to gigs and has an Imgur account) of esteemed Northbridge store Empire Antiques, which opened in 1993. 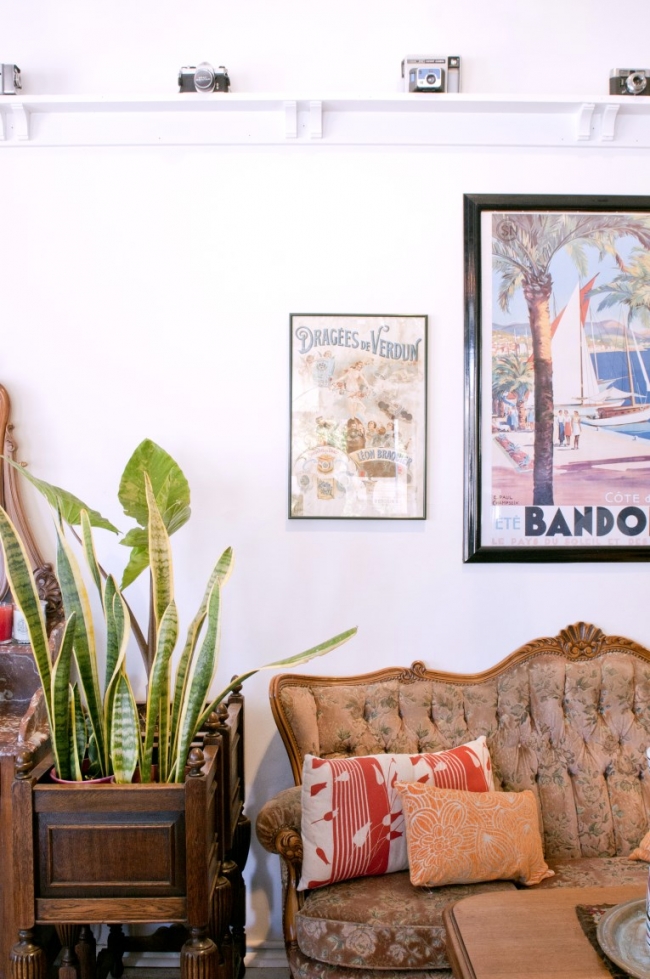 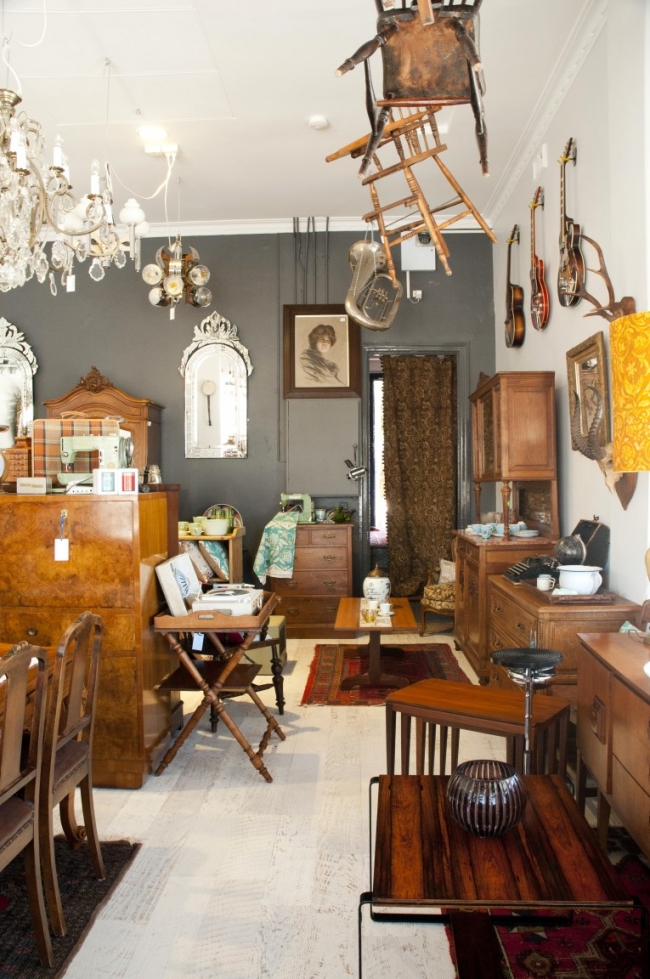 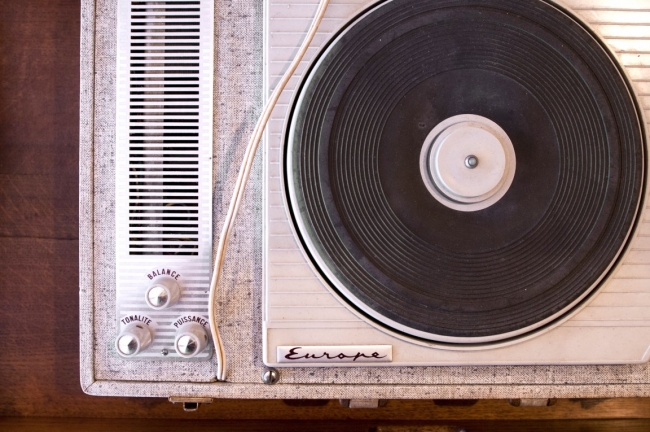 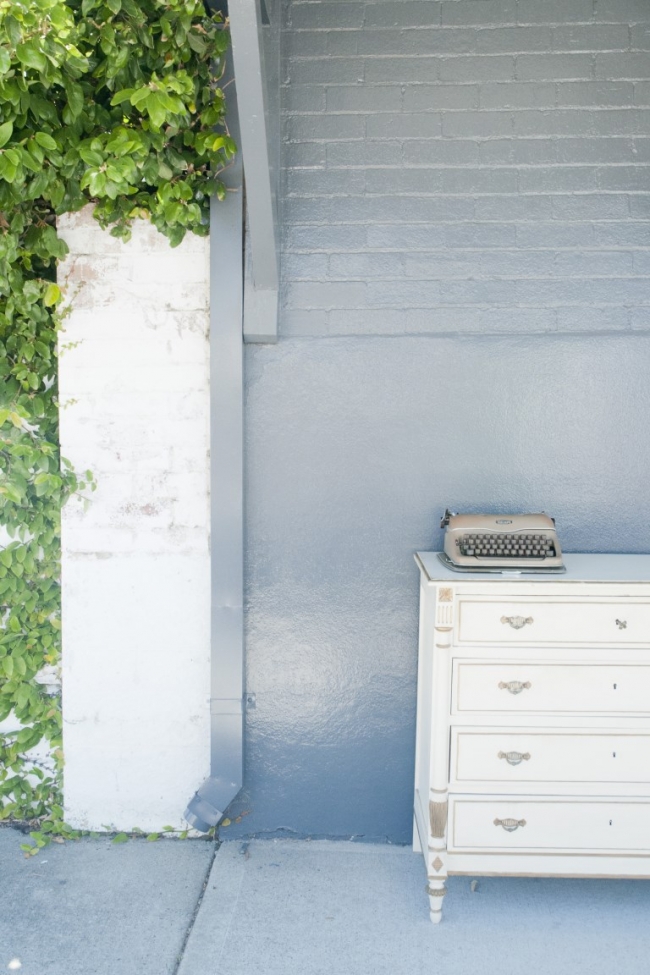 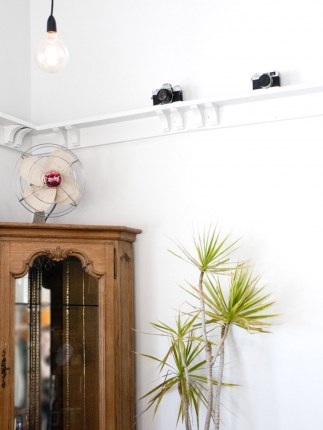 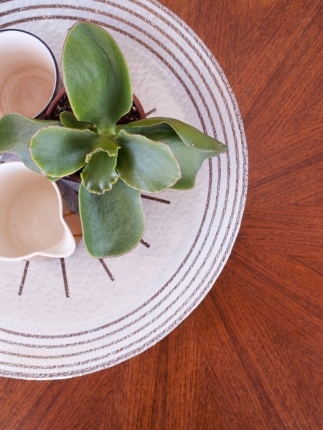 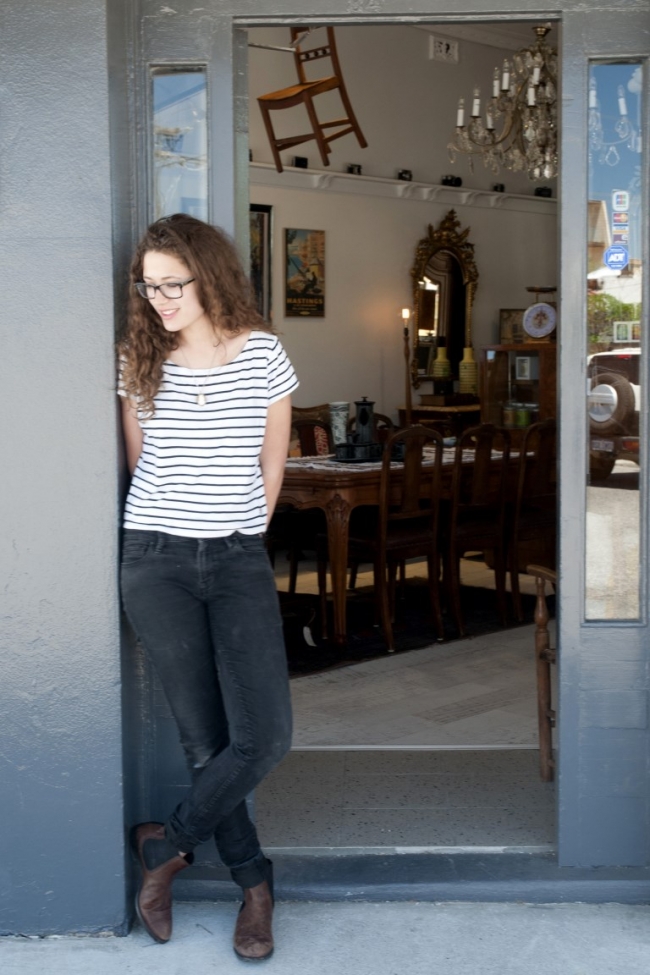 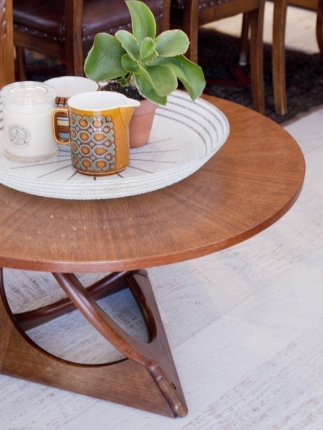 Second Empire will open tomorrow on beautiful and historic Hampton Road in Fremantle (if you remember where Ardeco was – that’s the spot!) and what makes this place different is that it’s not fuddy-duddy antiques for oldies. Here is an antique shop that will appeal to generations of all kinds.

It’s a family-run business - owned by Derek and Bernardine Aslett, who are helped out by their kids Jen and Liam. Liam conveniently lives next door to Second Empire, and Jen lives down the road. Jen and Liam grew up, as you would expect, in a house filled with old things. “Our house had beautiful furniture but as soon as you would get attached to something you’d find out Mum and Dad had sold it!” says Jen .

Antiques are this family’s genes – English-born Derek’s family has been in the furniture business since 1900 in Dover. So Jen is a fifth generation antique storekeeper. She left her job as a barista to work at Second Empire. “I knew I would do it (antiques) eventually but I didn’t think I would get into this so early – I thought I would be like 40,” she laughs. 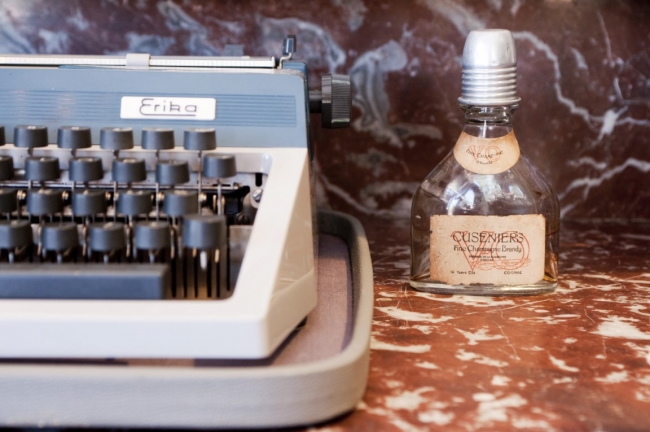 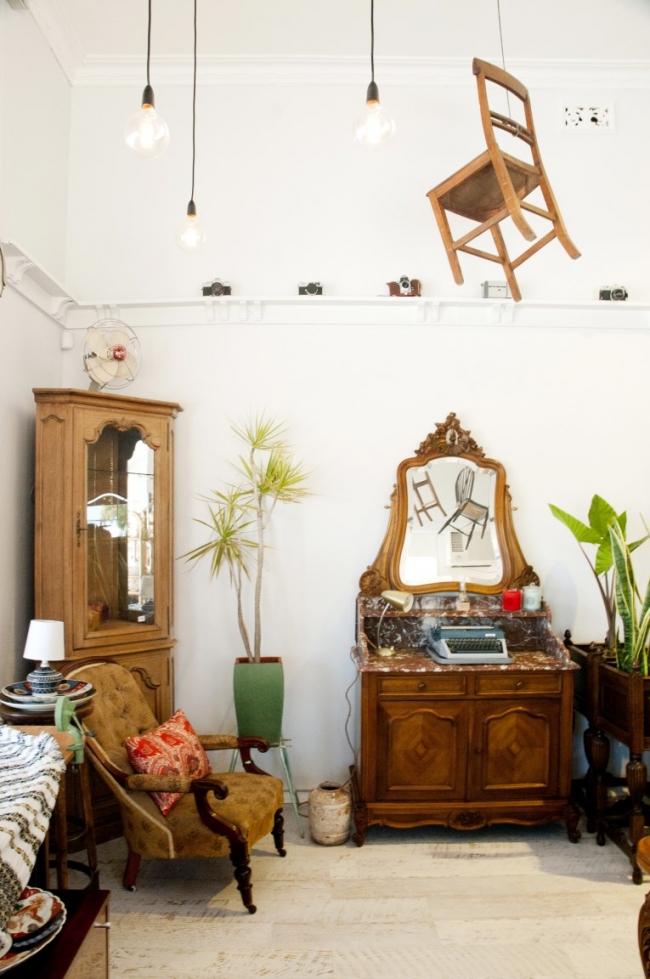 PICTURE TAKERS ON A PICTURE LINE: Cameras from the 60s to the 80s line the shop’s 1920s picture rail. On top of the Louis XV corner cupboard is a Mistral fan. Styling and photography by Meghan Plowman of The Orchard. 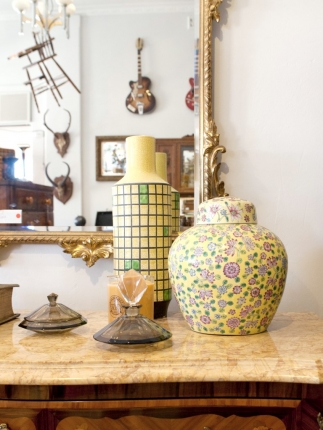 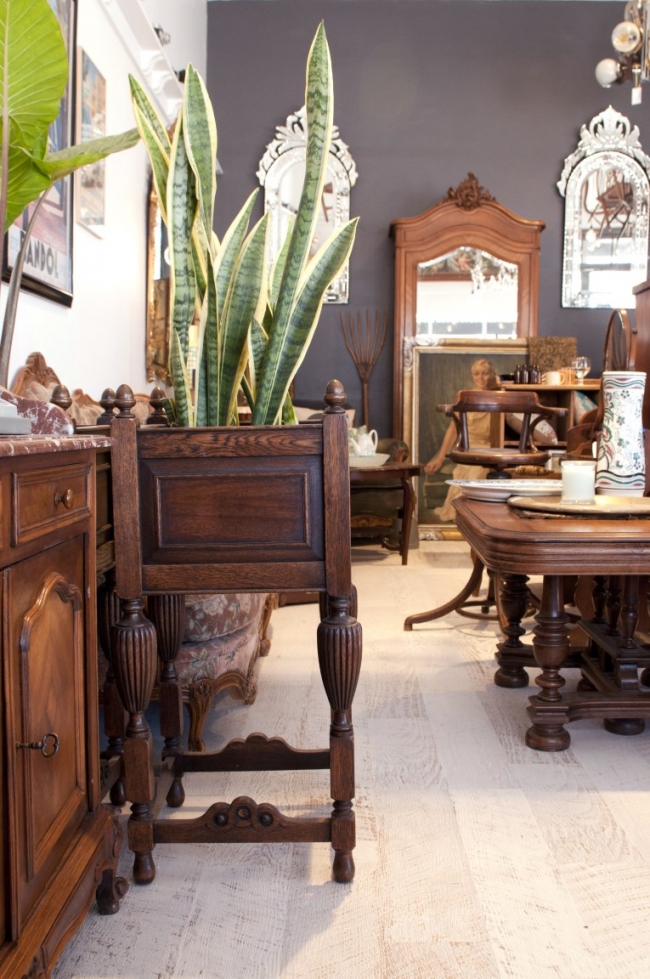 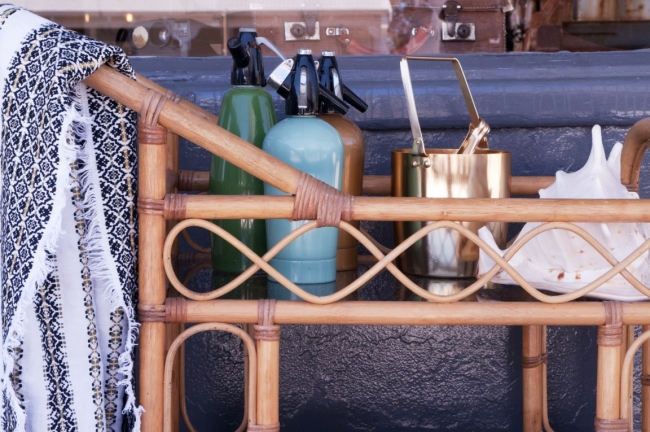 GAHHH! One of my favourite things in Second Empire... this vintage bar cart. You all know how I love my bar carts! Styling and photography by Meghan Plowman of The Orchard.

Derek and Bernardine hadn’t been planning on opening a second antique store – it just kind of happened. “Earlier in the year, Dad was looking to buy a house as an investment property and he happened to come across this place – a shopfront with a house out the back,” says Jen. “He said, “We could open a second shop in Fremantle!’” She shakes her head but smiles. “I remember at the time he said, ‘It will be easy!’ ”

It wasn’t. When they started renovating, they found that the floor of the old 1920s shop was extremely damp underneath and needed extensive restoration work. (On the plus side, the new whitewashed floors shop makes the furniture pop).

I’ve visited this place when it was Ardeco and remember it being a small, cramped shop jammed with bits and bobs that made you feel like your elbows had quadrupled in size. Now it’s completely different – a whole different set of wares and with shop styling by my friend Meghan Plowman (who styled and took these gorgeous photos) it feels relaxing; light-filled and airy. You can really appreciate the wares and see how they would work in a home today. And the TREASURES! So many things I would love for my house! It’s a mix of mid-century wares like a Beautility sideboard, travel posters, a 1973 Hornsea jug (want!) a Louis XV corner cabinet, retro cameras from the 1960s, an antique butler’s cart (I hope Mr Nerd and my family are reading this because I NEED this in my life. Also a butler). 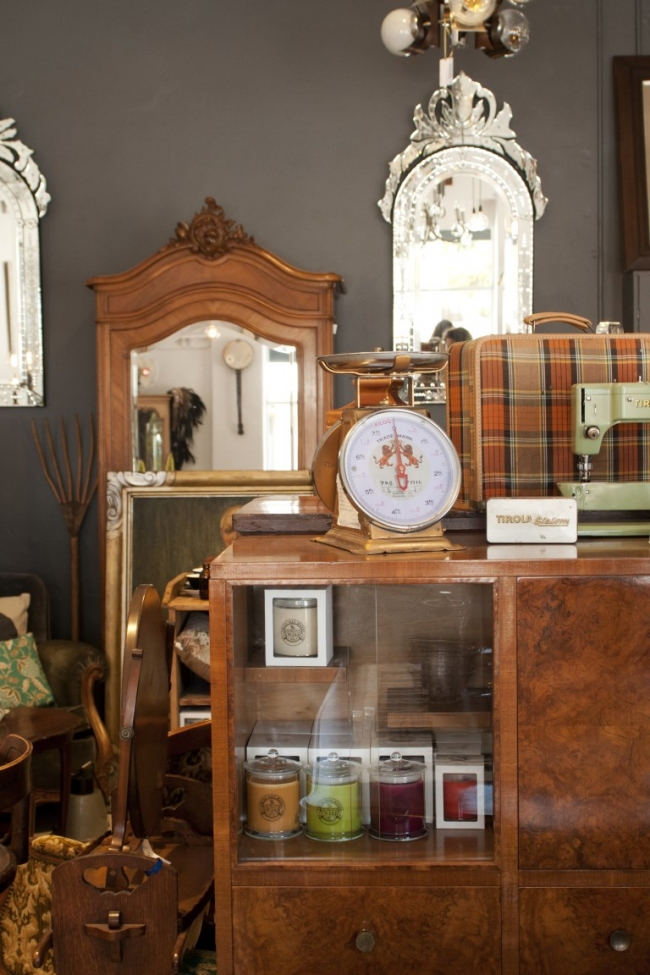 CAREFULLY COLLAGED: I think that in Victorian times people were sentimental, romantic kind of souls. For many it was a bit of a hobby to decoupage, making collages from lithographic pictures carefully cut out from magazines and newspapers to cover things like furniture, jewellery boxes and dressing screens, like this one. I remember reading about Victorian decoupaged room dividers in an old book when I was a kid (when most other kids were probably reading The Sandman) but my visit to Second Empire was the first time I had seen one in real life, so yes, I admit I was kind of bewitched #nerd. But there’s something so enchanting about it - it’s nice to think of some elegant young lady in a long dress from generations ago, carefully sitting by a window cutting pictures from magazines and gluing them to her dressing screen. It is kind of like the yesteryear equivalent of today’s teenager blu-tacking One Direction pictures all over her bedroom door. I so would have been one of those decoupaging girls if I had lived in Victorian times. Um, just like I know I would be a Directioner if I was 13 right now. Styling and photography Meghan Plowman of The Orchard. 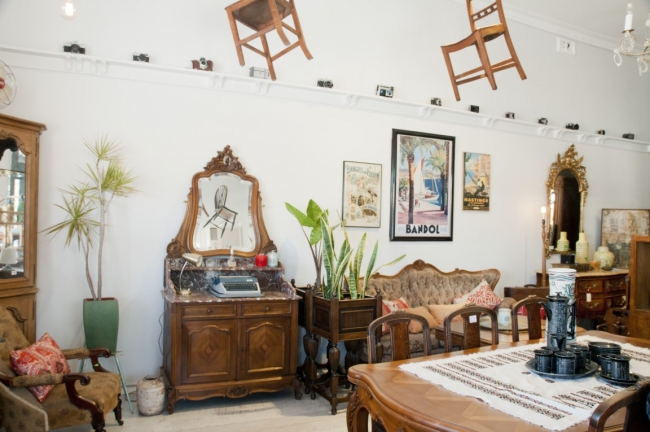 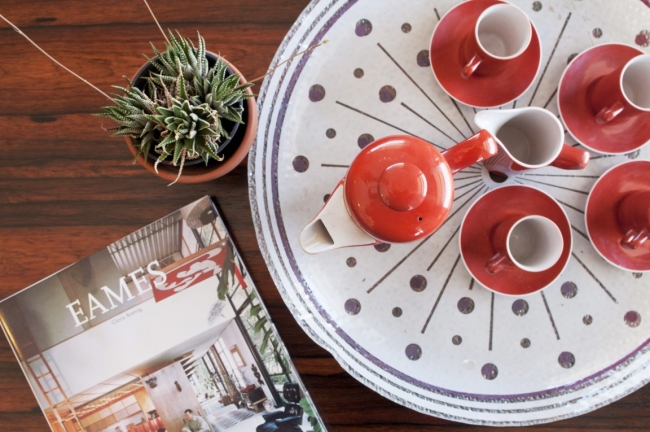 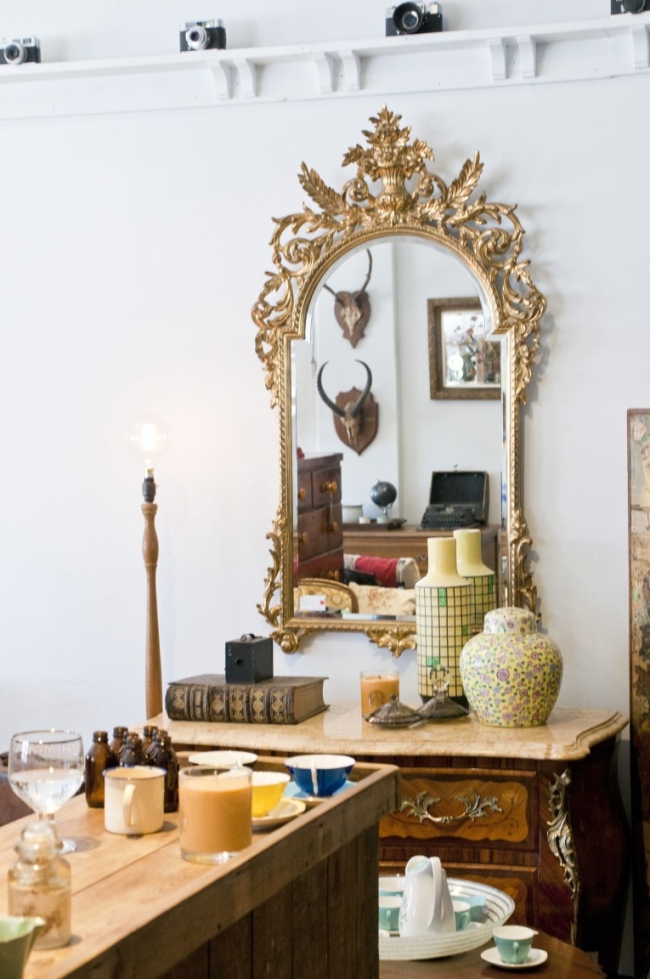 BRIGHT IDEA: Jen made the floor lamp herself using this awesome oversized bulb where you can see the filaments. Mr Nerd would love it. I’m thinking Christmas present ideas already… 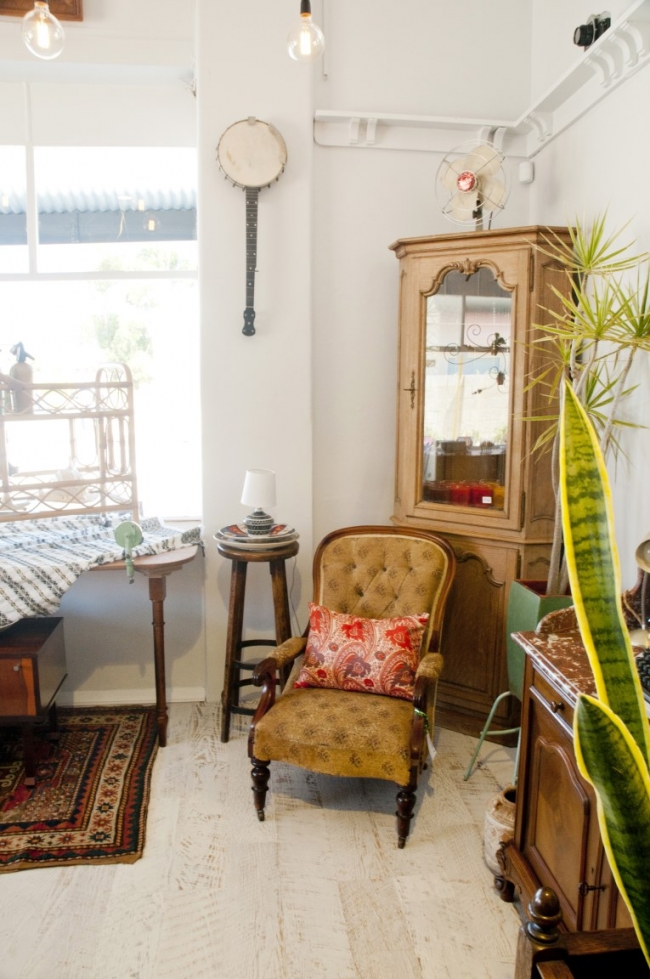 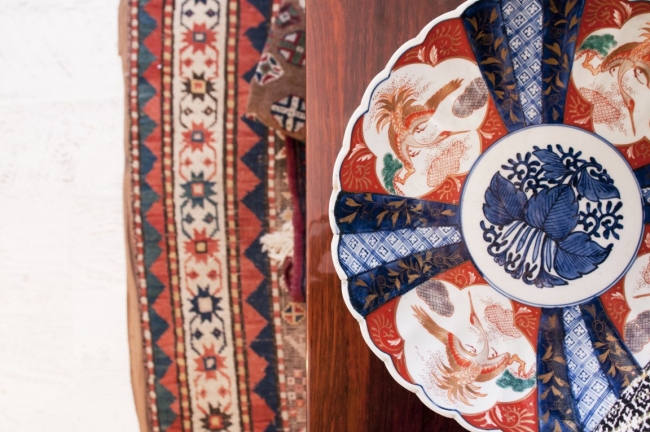 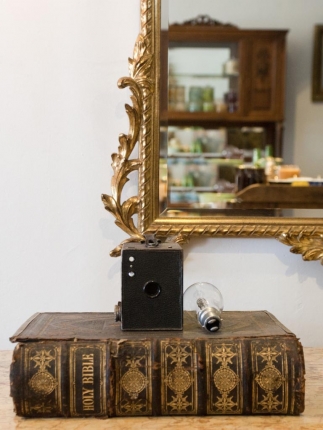 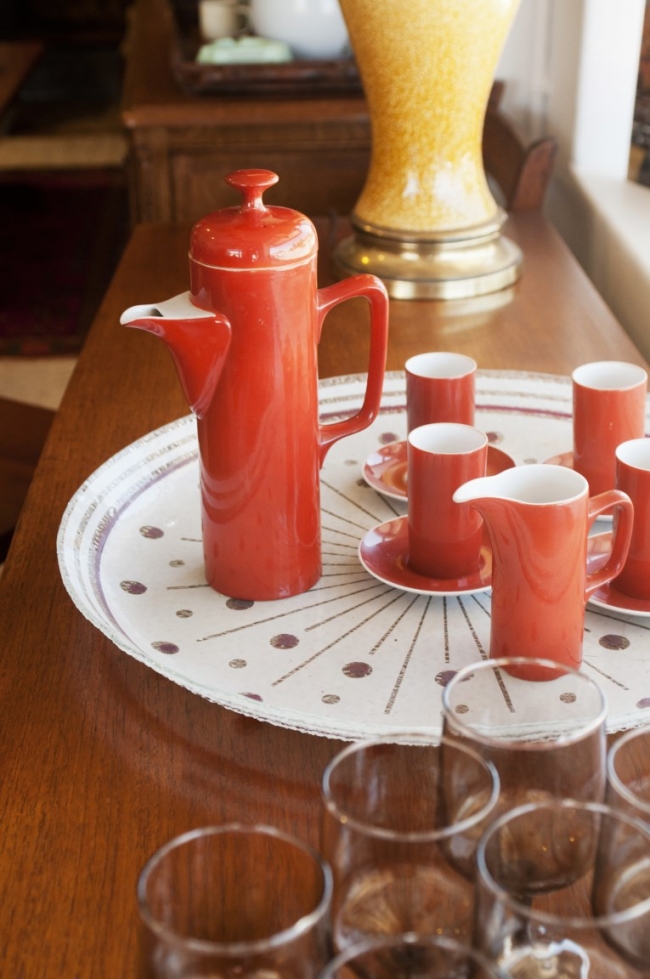 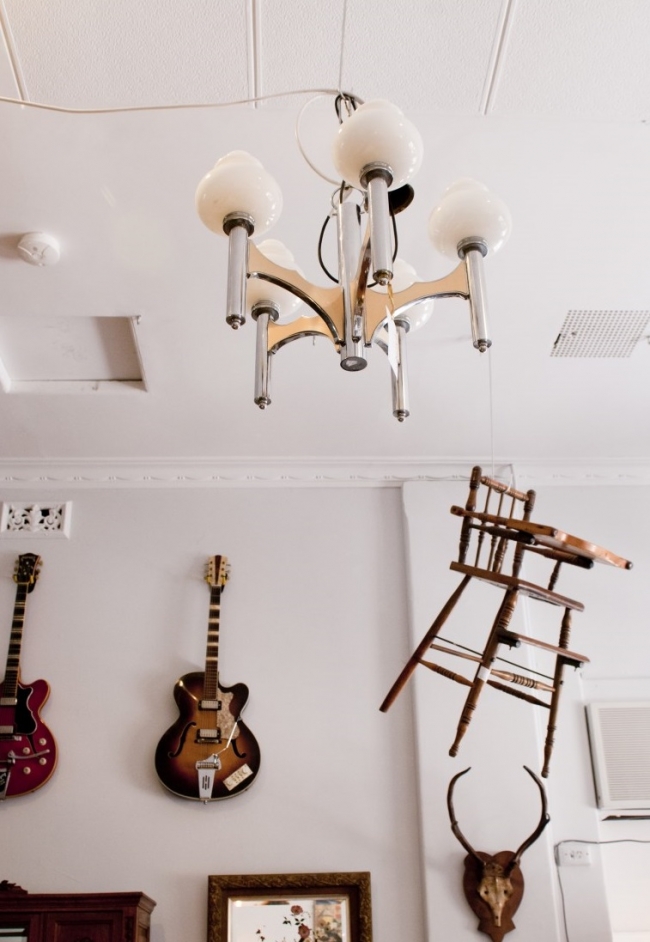 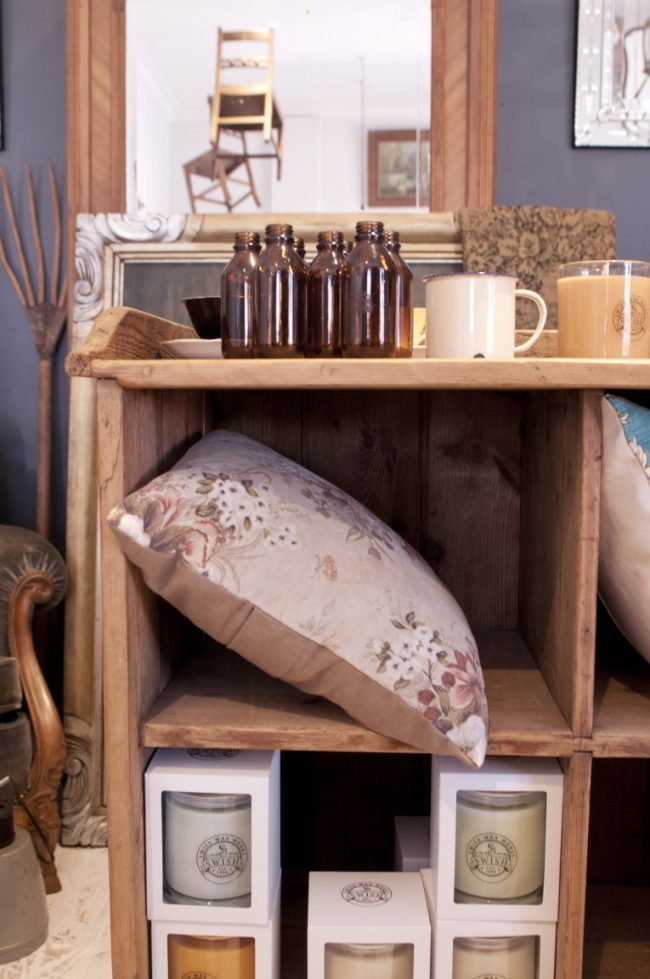 MID-CENTURY MODERN LOVE: Store owner Derek says he shies away from using the term ‘vintage store’ to describe Second Empire, because the term ‘vintage’ has been bandied around so much lately, its true meaning has almost been lost. So instead, he tells people just what kind of wares they have. It’s a carefully edited collection of retro goodies, antique furniture and mid-century modern, and spans things like a French oak Arts & Crafts whatnot (oh and I laughed when I heard that, but I actually learned something new; a whatknot is a stand with shelves for small objects!) Styling and photography by Meghan Plowman of The Orchard. 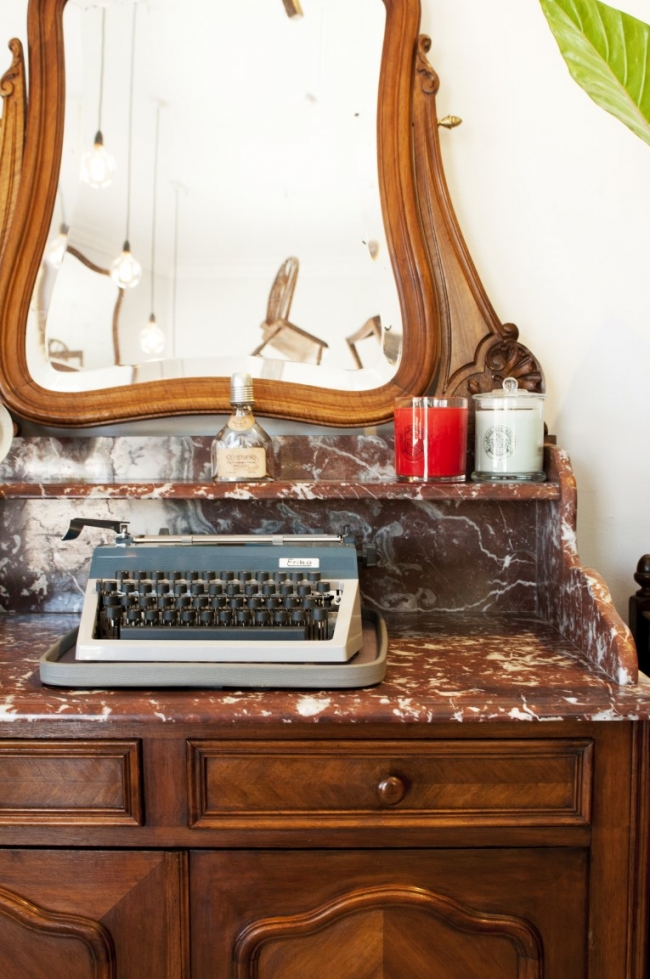 If you love mid-century furniture, 1970s ceramics, Victorian furniture – next time you are in Freo, pop in. This place has pull. Even as I chat to Jen and Meghan shoots, passers-by poke their head in through the door and say, “Oooh, have you just opened?” I ask Jen what clientele she wants to see when they open tomorrow. “I want everyone to come in, all day – all kinds of people and ages,” she says. “It’s a shop where it’s not just antiques for old people – there are so many things younger people would like.” Maya x

Second Empire is at 84 Hampton Road Fremantle and opens tomorrow! Call 9430 8878 and support this new small business by liking their Facebook page here.

Derek and Bernardine Aslett, assisted by their children Jen and Liam Aslett

A 1920s corner store with house out the back in Fremantle

A blissful mix that spans mid-century modern, 60s and 70s kitsch, Victorian classics and antiques with wares for every generation. It’s not just big purchases too - there are some small affordable gift options.

Forget any preconceptions you may have about antique stores. Second Empire is a beautiful, carefully considered edit with wares for every generation.

Dale - Wednesday, November 20, 2013 at 5:14PM
Yay! I see what you mean about it being light and nice. So many antique shops are so cluttered I feel like I'm going to break something every time I go in... .. as for going in to those places with my five year old daughter (who's very careful, but...) sometimes that's almost enough reason not to go in!
Reply

Maya from House Nerd - Thursday, November 21, 2013 at 8:17AM
Hahaha I don't even have a five year old but in some places I still feel like I'm practically tip toeing around!
Reply

Shannon - Wednesday, November 20, 2013 at 6:57PM
a) I would like to live here. b) when I was 13 I decoupaged my bedside cabinet top with pictures of Leonardo diCaprio. I wish I was kidding. It was full decoupage complete with the 50 layer shellac wash. Took mum about 6 months to sand back when I got over that phase. c) ...so, about living there. Can I just show up tomorrow and never leave?
Reply

Maya from House Nerd - Wednesday, November 20, 2013 at 7:08PM
Ahahaha!!! :) a) can I visit your new house? b) LEO!!! Ahhh! When he had the floppy Titanic hair... that 50-layer ModPodge door sounds like a masterpiece. Things like that need to be taken off their hinges and used as a coffee table. Maybe they will be in antique stores 150 years from now. c) I say you only live once. When they flip the shop sign to 'closed' you could hide in a Victorian armoire or something.
Reply

Shannon - Wednesday, November 20, 2013 at 7:26PM
I can just be the weird lady in a kimono or something hat they shoe back into her armoire each morning after I cook them breakfast. Although, I'm guessing planting veggies in antiques is frowned upon so maybe I'll just visit. Sometimes I daydream about floppy haired boys. It's an addiction that never really goes away.
Reply

Maya from House Nerd - Thursday, November 21, 2013 at 8:20AM
Exactly, every antique shop needs one of those weird kimono ladies. I too like boys with a good head of hair. When I was a kid all my crushes had very nice hair. I like to think I am not a materialistic/hairist person, but two years ago my now-husband shaved his head and I actually cried.
Reply

Mara - Monday, January 25, 2016 at 3:10PM
Hi - Store looks great and I love your blog. Just wondering if you are able to tell me what the lighter coloured paint colour used in the store is? I love it against the dark grey!
Reply

https://www.worldentertainmenthub.com/ - Friday, August 31, 2018 at 1:46PM
Greetings - Store looks extraordinary and I adore your blog. Simply thinking about whether you can disclose to me what the lighter hued paint shading utilized in the store is? I adore it against the dim!
Reply

Visit Us - Friday, August 31, 2018 at 1:48PM
This is quality work. The article is exceptionally useful. This is something I am particularly intrigued by. Much obliged to you for sharing your bits of knowledge regarding the matter. I have officially shared it on different online networking stages.
Reply
Post a Comment
Thanks for your comment.