Before I even started my first post for this blog I knew I wanted House Nerd to celebrate all kinds of spaces and home projects - from the small, like a table makeover, to the big, like a 1920s cottage renovation and extension.

This one falls somewhere in-between those two – it’s my younger sister Simone’s music room. Simone transformed our other sister's very girly red and pink bedroom into a music room, dubbed the Boom Room. ABOVE: The letters were from Typo (they have an amazing online shop) and the CD shelf brackets from IKEA.

ROOM REPAINT: Simone wanted to repaint the room but was a student on a budget. “The room had been repainted a ridiculous number of times when it ruled under the reign of Natasha,” Simone says. “It was too red. I left one wall red, because I didn’t have much money, then did the poster wall a dark charcoal colour that I found lying around in our old paint can army in the shed.” The red paint was Dulux Red Stop. ROOM BRIEF: “The room needed be functional as well as appealing,” says Simone. “It needed to be a room I wanted to spend most of my time in and not get bored.” My favourite thing in Simone’s room is the mosh wall which she painted onto the wall using several photos of mosh scenes. GETTING ROUND THE PARENTALS: Simone painted the whole mosh wall in a weekend while sick with tonsillitis. “Mum and Dad are pretty hard people to persuade when it comes to making changes in a room so I did the whole thing while they were on safari so they couldn't argue with me,” Simone says. 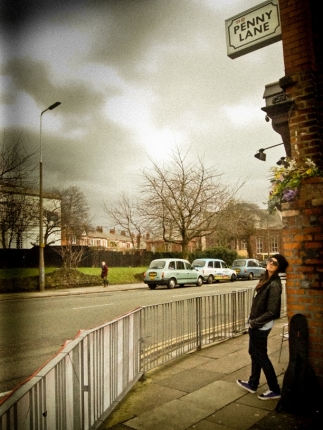 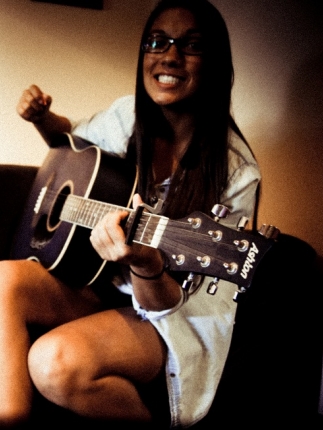 MUSIC NERD: My sister has forever been one of those people who always have headphones on. She started playing the guitar when she was ten, after years of begging our parents for lessons, and later started learning the drums at 14 after more years of parent persuasion. “Shortly after I started drums I also picked up keyboard but gave up lessons pretty quickly and started teaching myself instead. Since then I've also been trying to teach myself the harmonica and ukelele for fun.” 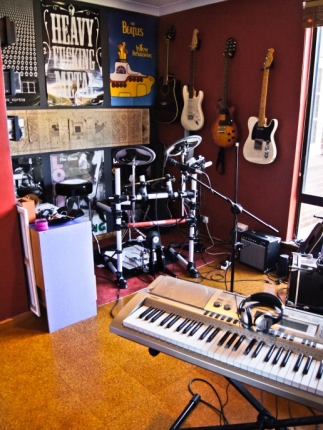 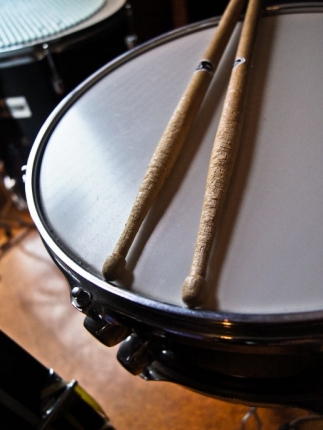 A STUDIO-LIKE SPACE: Instruments that had previously been crammed into Simone’s bedroom got to enjoy more space in the Boom Room, where she and friends get together to jam. “Besides the addition of a couple of ukeleles and a guitar, all the equipment in the photos was collapsed and Tetris'd like a pro into my bedroom,” says Simone. 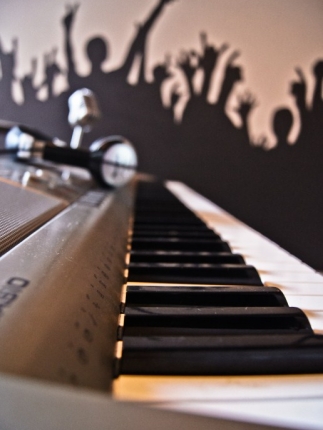 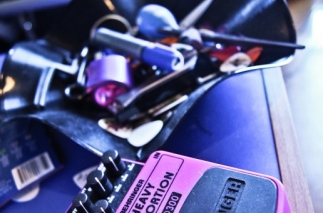 MOSH DETAILS: “The person with their hands up with the Illuminati symbol is Pete Wentz,” says Simone. “And the person holding up the sign is actually a cartoon - I couldn't find a real person with such good poster-holding skills.” ROOM DETAILS: “A lot of the bits and bobs in the room were gifts,” says Simone. “The record clock came from my cousin, record bowl with picks in it came from House Nerd. I have a make-your-own-picks stamp from my friend Claire as a 21st gift and many pairs of drum sticks.”

When I lived at home I had the best bedroom in the house. It was upstairs and the biggest. No one in my family really used the upper floor then, it was mostly just for overseas guests and storage and my dad’s library. I moved into the bedroom when I was 15 when my two younger sisters were too scared to even venture up to the upper floor of our house by themselves at night. It was a smart move. It was the biggest bedroom, the most private, had the best view and I got a bathroom all to myself.

It took them a few years, but eventually my two sisters twigged that I had the best room in the house, and from then on it was just continual screaming fights over who got my room when I moved out.

Natasha was the victor and was very gleeful and pro-active about it. I remember the night before I moved out of home packing all my boxes and suitcases full of things and lining the hallway with them. The next morning I woke up early, tired and not looking forward to packing it all into the cars, to find the hallway bare. My usually-lazy sister had already packed all my stuff into our cars. “You’re good to go once you get your bed out of here,” she announced. She then went to Bunnings, bought paint and had my room completely re-painted and her furniture in and picture frames hung up before the day was over. Nice to know she would miss me deeply.

Simone didn’t completely luck out, however - because Natasha’s old room was now empty. Simone worked quickly to skillfully nab the room from our mum who wanted to upgrade her sewing room (tough luck). “Dad wouldn’t let me knock down the wall between the two bedrooms so I could create Simone's Bedroom 2.0,” says Simone (no shit). “So I turned it into the Boom Room.” Check out the captions to find out how Simone created her awesome mosh wall, put on a record and enjoy the rest of the sneak peek. Maya x 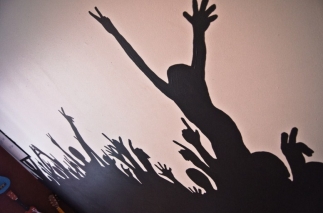 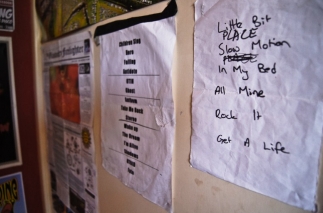 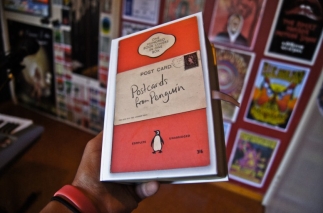 ABOVE: “I wanted to keep the room as music related as possible,” says Simone, set list pincher. “I think one of only things I have in there that’s not is my Marauders Map... I mean what?” Her music buddy Sarah helped pick out the larger posters. Simone also added Penguin book covers to the closet doors. POSTER SCENE: “I love the wall of smaller posters,” says Simone. “I got the majority of them from this great store called Poster Scene in Boulder, Colorado. There was a $5 bin or you could buy 5 for $20. My friends from Boulder took me there and I went crazy. It was so cool. I grabbed the dude’s business card cos he told me they ship to Australia. Yay!” 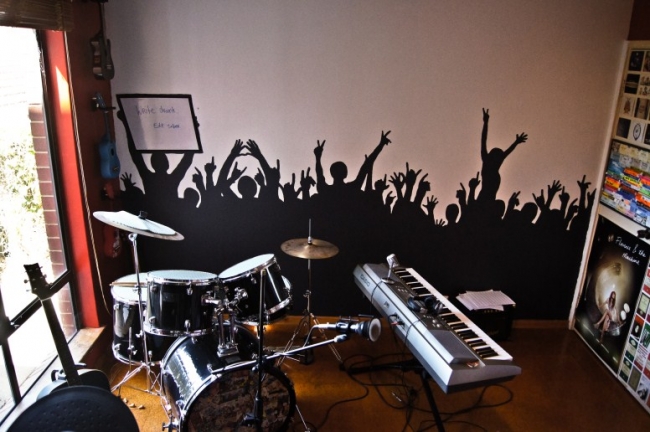 MOSH WALL: The mosh wall is my favourite thing in the room, partly because I am always impressed when people try something bold and pull it off. It first needed four coats of white paint to conceal the red paint. "I'm not sure where I got the idea for the mosh wall,” says Simone. “I love Wall Candy http://www.wallcandywallpaper.com.au/default.php and the stick-on decals I've seen, so most likely from there. I used a series of photos I'd either taken or stolen from the internet and used Photoshop to crop out my favourite bits. I then resized them so they were all a similar size, attached them together and then blacked them out to give the silhouette effect.” She then traced the image onto the wall. “I borrowed a projector from Mr House Nerd’s lovely mother to put the image up on the wall. I then traced it on with a pencil and painstakingly painted it. I went with painting my own design not only because it's unique but because I really suck at putting contact paper on books, so I figured I would struggle at putting up wall decals. So if you're like me, I'd suggest doing the same. It's a cheaper alternative and a lot easier if you're familiar with Photoshop.” 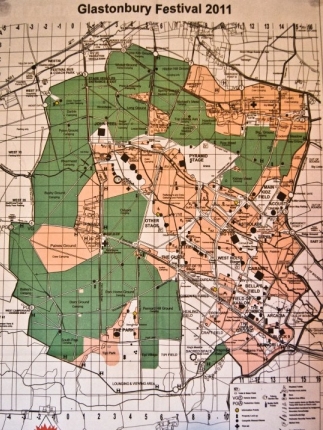 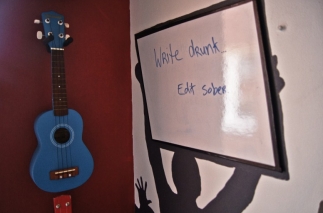 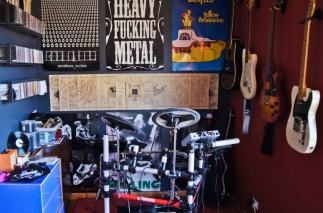 LEAVE A MESSAGE: On the mosh wall Simone attached a piece of whiteboard for interchangeable messages and the odd crude drawing. “I love my whiteboard poster. I got a cheap whiteboard from Bunnings, traced it to the measurements of the mosh wall, cut around it and tacked it up.” 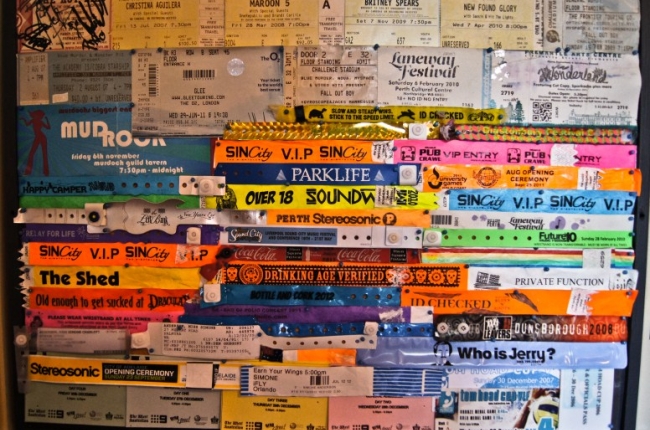 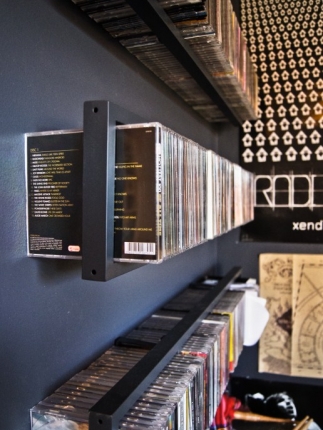 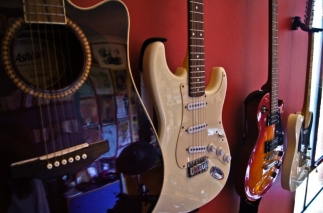 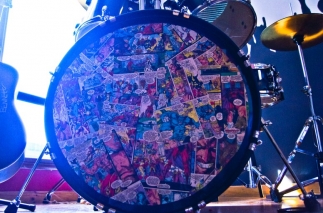 BASS DRUM, ABOVE RIGHT: Simone montaged the front of her bass drum with an X-Men comic. 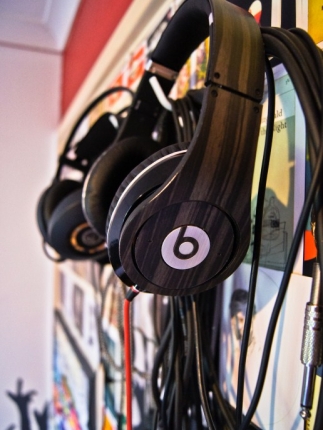 HEADPHONES: “The most awesome gift ever was the Studio pair of Beats by Dre I got from House Nerd" (why, this House Nerd person sounds like she would be amazing) - "and Mr House Nerd in 2010,” says Simone. “They've been all over the world by now.”

A very girly bedroom turned into a music room

Amanda - Saturday, March 9, 2013 at 8:40PM
I too have a 'music fanatic' little sister :) She would be super jealous of this room, although the front lounge of her house has been dedicated to all things music with numerous guitars, dad's old record player and HUGE record collection and lots of other musical bits and pieces. Simone's way of decorating her 'boom room' rocks!! Very original and VERY cool. I especially love the mosh pit silhouette.
Reply

Maya from House Nerd - Sunday, March 10, 2013 at 10:08PM
I know how cool is it? I was so impressed when she did it. When it comes to wall painting I deliberate for aAGES - it would probably take me years to gear up to something so dramatic interior-wise as this, but Simone just thought of it, went ahead and did it (in a well-timed weekend) and pulled it off! So funny that you have a music fanatic little sister as well! I am seeing more and more similarities :) Her front lounge sounds awesome especially the old record collection.
Reply

bootsinfo.webs.com - Thursday, September 13, 2018 at 1:23AM
I sent your articles links to all my contacts and they all adore it including me.
Reply
Post a Comment
Thanks for your comment.