People sometimes ask me if I get really jealous all the time “looking at all those beautiful homes”. I do get pangs of envy! But it’s never to the point where I come home to The Crap Shack and actually feel teary. Unless it is one of those times where I realise I have shrunken half my clothes in the dryer again. But that is not really related.

Usually when I learn how hard many people work to get their dream house and how long it takes them to get there, any feelings of jealousy disappear. Mostly I just feel happy that nice people have such a great house that makes them feel good. This is one of those stories. 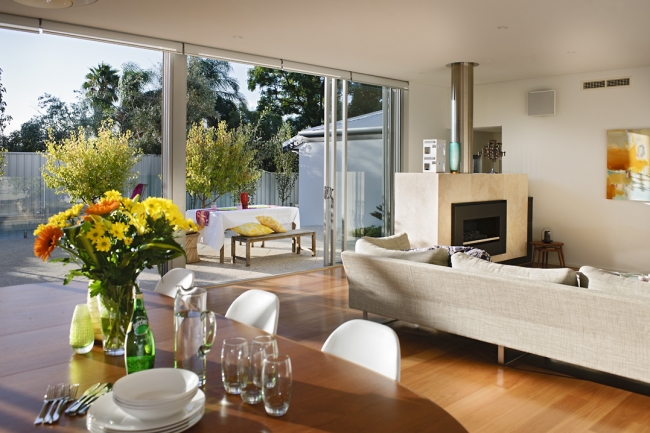 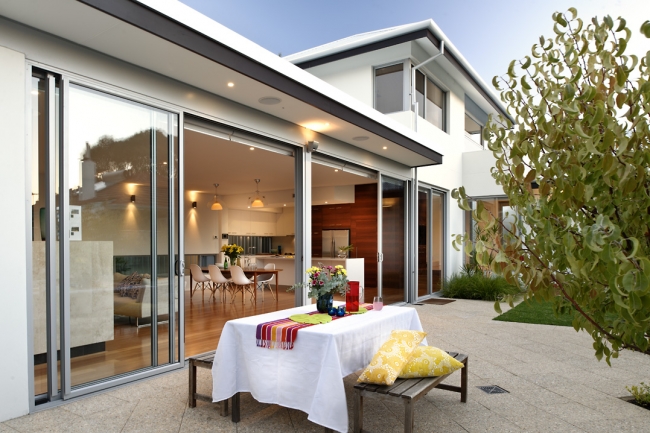 COFFEE OR CAKE? The house has been wonderful for having people over, says Tracy. “I don't think we are big entertainers in the "party" sense but that being said we enjoy having friends over and having family to stay - we just try to keep it casual and laidback. Coffee and cake on a Sunday afternoon is a popular family get-together.” RELAXING FEEL: The open-plan living space is filled with northern light. The lounge was a Norman and Quaine from Living Edge. “We are still working on bringing some personality to the house and I just recently had a little splurge on cushions from Timorous Beasties,” says Tracy. 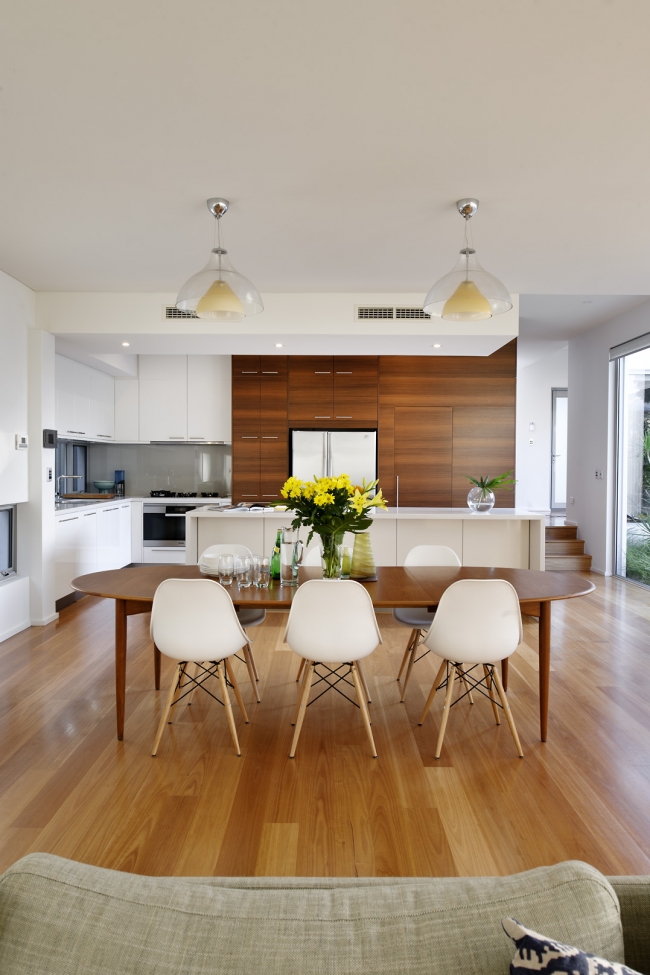 NEW BUT OLD FURNITURE: I love the dining table (and I feel like I will never tire of Eames chairs!) After moving in and doing the house fit-out and the garden, Tracy and Matt saved to invest in some beautiful new furniture to suit their new home. “We prioritised which furniture pieces we needed, so to begin with we purchased a new lounge and a vintage dining table for the central living space and a new bed for us. That was it for a little while, as Matt went to work on building up an audio system including constructing the amps and speakers himself. Then we had a go at designing furniture. The dining The dining table is a vintage Parker dining table from Hunters and Collectors” (an awesome store, nerds!) “where we also got a Jielde lamp.”

This house just feels so comfortable and relaxing the moment you walk in the door, the kind of house where if no-one is home you feel like you could put on music really loudly and thick fluffy socks and slide around on the floor and then relax and read a book like a normal person. Isn’t it beautiful?

I first saw it for work and although I usually gravitate towards older rather than new contemporary homes, it always stuck in my mind – and when I asked if I could share their house on House Nerd, builders Cambuild and owners Tracy Clarke and Matt Brown very happily obliged. Tracy and Matt bought their block of land back in 2003 as first-time home buyers - and are proof that endless patience, waiting and saving can definitely pay off when it comes to building .

“When we first started looking for a house we struggled to find anything in the areas we wanted that we liked and that was in our budget,” reveals Tracy. “It was my brother who suggested we look here and so one day we came down and drove up and down the streets to get a feel for the suburb and when we came across a place for sale we rang the agent.”

The agent met Tracy and Matt at the house an hour later – but they weren’t too keen on the house, a poky, dark and shabby 1950s home.

“My brother was working nearby and I rang him up to see if he could come and have a look,” says Tracy. “It was obvious from the first viewing that this property was a redevelopment project as the house was in pretty bad shape, but we were both nervous first-time buyers and having my brother, who was working as a building supervisor at the time, check it over and tell us that it was a definite knock over with the majority of the value tied up in the land and not the house calmed us - a bit! So we put in an offer.” That was Christmas 2003 and they settled in early 2004. 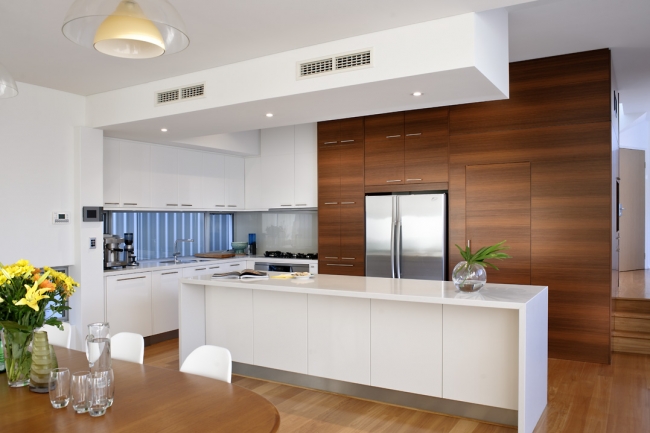 KITCHEN STYLE: The kitchen features CaesarStone benchtops and a floor-to-ceiling wall of timber cabinetry that stretches out into the entry foyer, forming a zone for display and adding ‘oomph’ to the all-white space. The timber doors conceal a walk-in pantry and an appliance cupboard. The kitchen’s central island bench has waterfall ends and a breakfast bar. 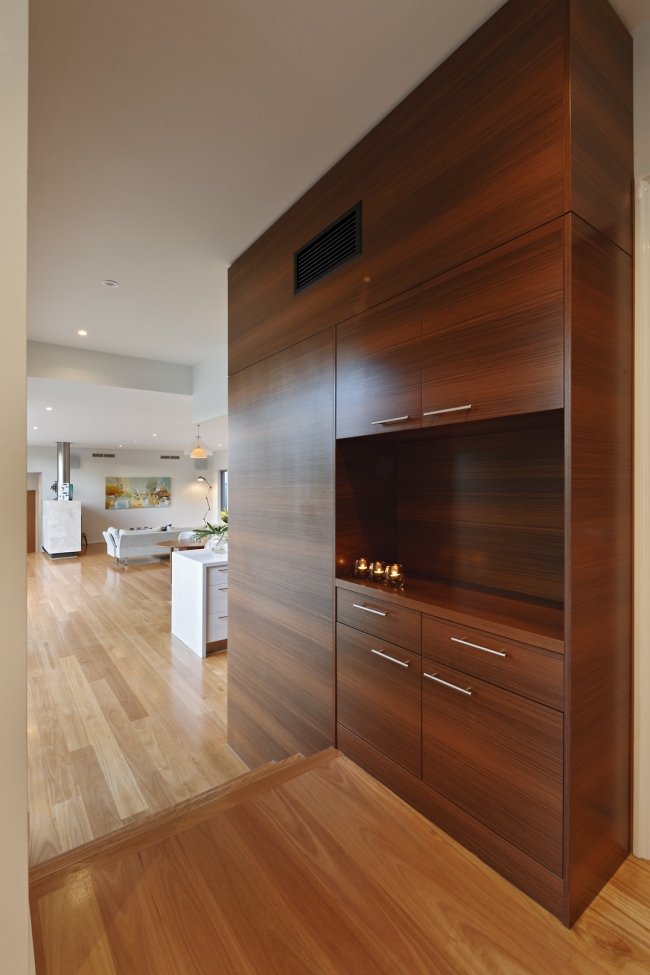 WOOD LOVE: One of my favourite things about this house is that there is wood throughout every room of the home. White walls throughout the home complement the warm honey tones of the polished blackbutt floorboards and the solid maple internal doors. In the entry foyer, this stunning display and storage cabinet wraps around and into the kitchen two steps below. PRIVATE GARDEN: The front garden features a second paved alfresco with walls clad in Melbourne bluestone, a feature Tracy loves. “Before we did the front garden landscaping, the garden was quite open. Originally we were going to put a wall all around the front garden and plant a hedge inside, but it would have taken a long time to establish. Jo from Taylor Landscaping suggested we put the walls in for privacy so that you can’t see directly in from the street but you still get a feeling of privacy without closing in space too much.” 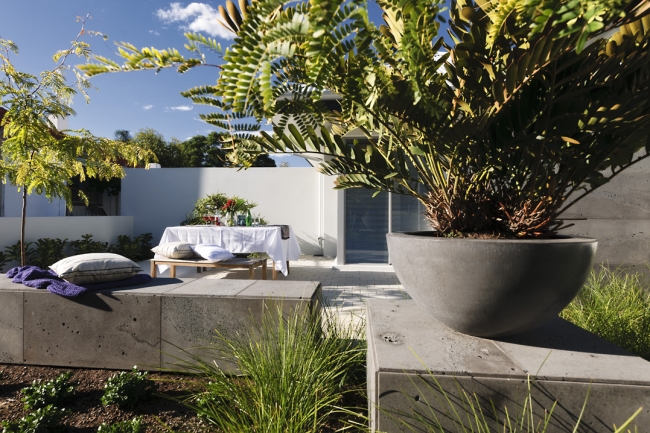 GARDEN: The hardscaping of the garden was by Cambuild, the soft landscaping was by Taylor Landscaping. UrbanStone pavers add texture and colour to the garden and are complemented by beds of water-wise grasses.

From first-time buyers Tracy and Matt became first-time builders. “The idea of designing and building a house with an architect was always something we wanted to do, we just didn't know if that was a reality,” says Tracy. “My brother had worked on a few projects for the architect John Lewis and so we decided it was worth exploring this as an option.” They looked at some examples of his work – and fell in love with it.

But then they had to play the waiting game. “Once the design process was finished we were about to go out to tender when the building industry in Perth went (for lack of a better word) mental with no signs of slowing down,” says Tracy. “Prices went through the roof and good tradesmen were in short supply so we made the difficult decision to hold off.” So Tracy and Matt lived for years in the dark, tiny 1950s house.

Finally it was time to build and Tracy and Matt approached building company Cambuild to create their dream house. The old house was knocked down in 2008 and the new house took 18 months to build, finished in April 2010. But there were still a few touches. “When we first moved in we just made do with what we had, as we had to first fit the carpets, blinds and built-in robes, then we switched our focus to the garden as we wanted the structure of the house and garden to look and feel complete,” says Tracy. Then they slowly started accumulating special new pieces of furniture, with several gorgeous vintage pieces. 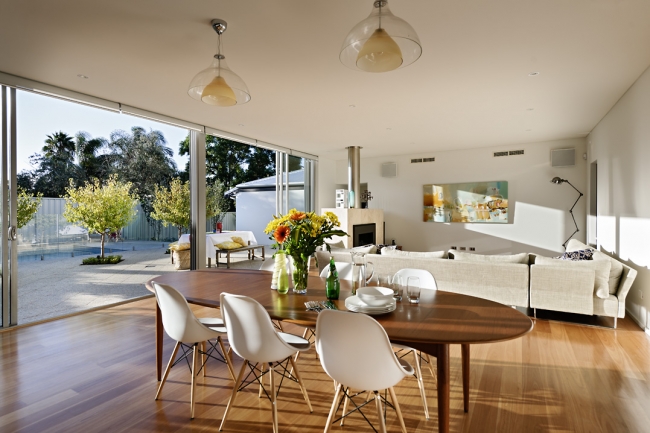 LIGHT AND AIRY: Cambuild managing director Cam Wilkie says the home makes great use of northern light so each room feels light and bright throughout the day. “It’s a very open-plan home with great north-facing aspects,” he says. Full-height commercial grade sliding doors that make the most of the northern light. A travertine-clad gas fireplace to the living area enhances the room’s warm and welcoming feel. The space holds a painting by Rob Forlani. ABOVE: Almost every room in the house features wood in some way - the internal doors are all solid maple. 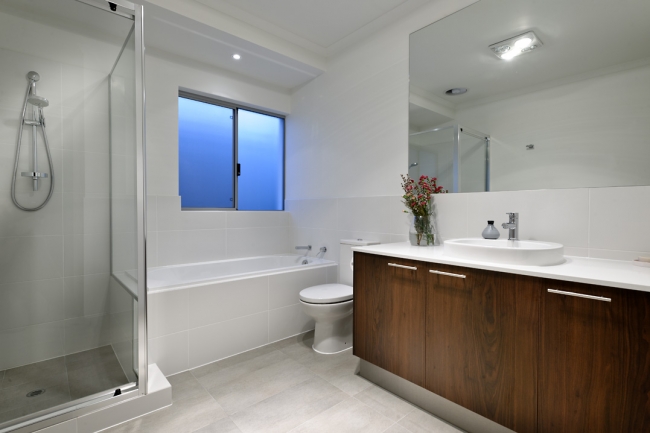 ABOVE: An all-white bathroom is punctuated by rich timber veneer.

The gardens were completed just in time for Christmas, when family visited. “It gave us a great chance to see how the home and garden worked while entertaining,” says Tracy. Now they have their dream home with the things they really wanted – a workshop and TV room for Matt and a library for Tracy.

Tracy says they were thrilled with the work of Cambuild and John’s design and says the house was worth the wait. “I love that in this house you don’t feel like you’re living on top of each other. It has a lovely central living area where you can come together but there are also private areas where you can go off and do your own thing. It’s nice to sit in front of the fire in the living area in winter and it’s really nice to be in the library in summer!” Maya x 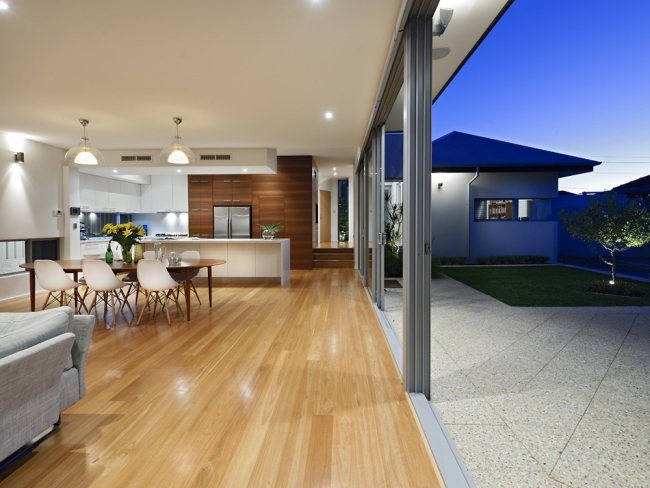 HAPPY CUSTOMERS: “I would certainly recommend Cambuild, John Lewis and Taylor Landscaping to others, but I would also say that you have to find the right fit for you,” says Tracy. “Designing and building your home is a long process and you have to be comfortable with the people you have chosen as it is so important to maintain a good working relationship. Remember also that you have to be a good fit for them too!” 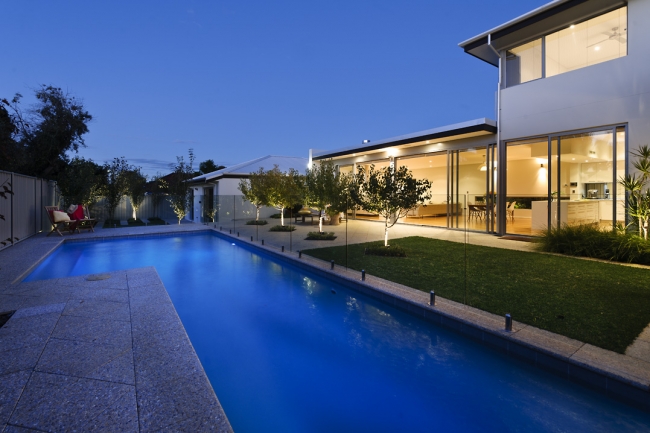 From first-time home buyers Tracy and Matt became first-time builders. They share with me what they learned and give their advice for people wanting to build an individual home. 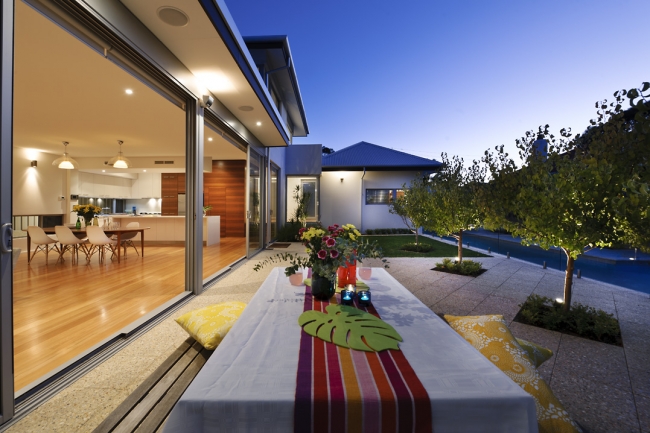 Johanne - Thursday, September 26, 2013 at 3:44PM
This is a beautiful house and looks practical too. I love so many things about it, including the choice of facade colours. I wonder if the owners/builders would care to share their colour selection?? Please....
Reply

Maya from House Nerd - Thursday, September 26, 2013 at 6:31PM
Isn't it stunning? :) Let me ask Tracy and Matt if they would be happy to share their colour choices. I will get back to you...
Reply

Maya from House Nerd - Friday, September 27, 2013 at 7:36PM
Hi Johanne, Tracy was kind enough to reveal: "the walls were painted with Dulux paint but the white tint was Taubmans "Milk Dew" @ 200% tint (we actually used "Milk Dew" inside as well @ 50% tint) the brown trim on the fascias was "Spanish Eyes" (acrylic low sheen - I think it is a Dulux colour). The Colourbond roof was "Surf Mist" and also used Zuncalume Mini Orb as a detail on front elevation." :)
Reply

Maya from House Nerd - Thursday, July 30, 2015 at 7:19PM
Thank you Ashlee! I always love discovering a new blog (especially a Perth blog!) - I hope your build is going well :)
Reply