But when the house in question has undergone a makeover in the 70s, when people commonly modernised period homes by stripping or covering up character details, restoring a character home and giving it back its original charm can become a much more difficult task.
I recently spent a very enjoyable evening at the beautifully renovated home of solicitor Michael Jenkin, his wife Jane and their three gorgeous children, Emma, 15, Hugh, 12, and Kate, 5. 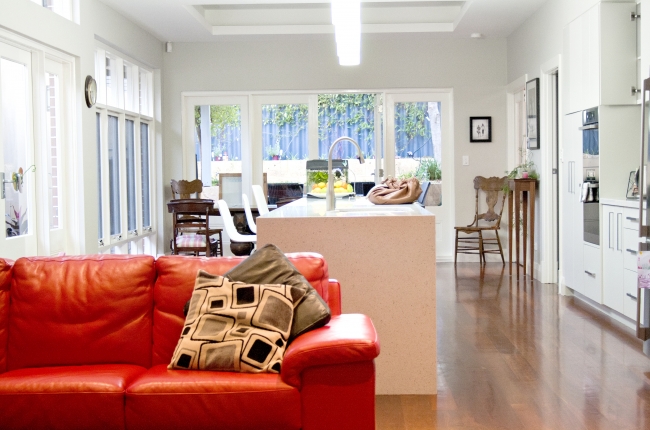 Above: The new open-plan kitchen, living and dining is where the family comes together.

Michael and Jane bought their 1920s house in Mount Hawthorn 19 years ago. Before that, it had been owned for 40 years by an elderly lady who had passed away. Work done to the house in the 70s had seen a lot of the home’s original features taken out or painted over.
“What did you like about the house when you first saw it?” I ask Michael and Jane. My question is met with polite smiles before they both look at each other and burst out laughing.
“We could see beyond it,” Jane says diplomatically. “It was the location we loved.” 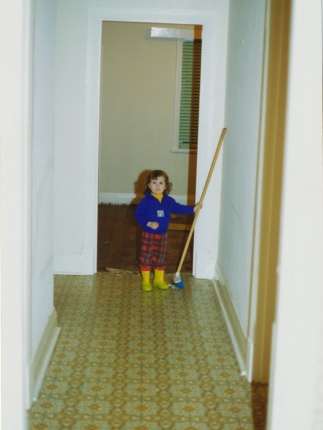 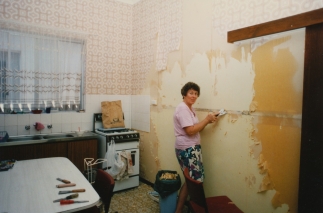 Left: A very tiny, very cute Emma in the old front hall with lovely lino. Michael and Jane painstakingly stripped the doorframes of their paint and varnish to show the beauty of the original jarrah. Right: The house as it was when the Jenkins moved in, with 70s brick wall and plastered facade, and a photo of the old former kitchen, with parental help from Jane's mum, who helped scraped off the wallpaper. 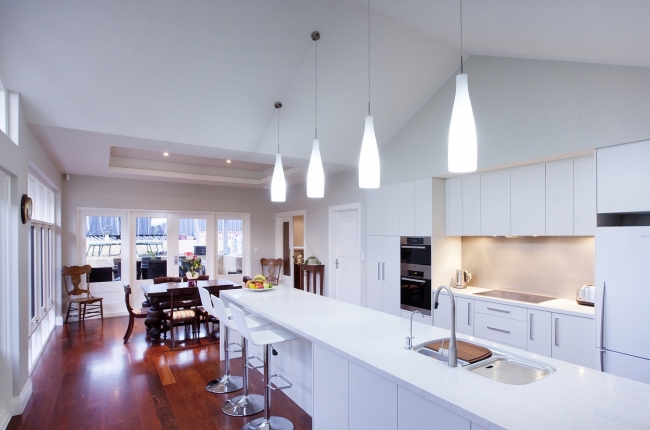 ABOVE: A wall of windows and doors to the north-facing garden means the new living area to the rear of the house is filled with light, year-round. 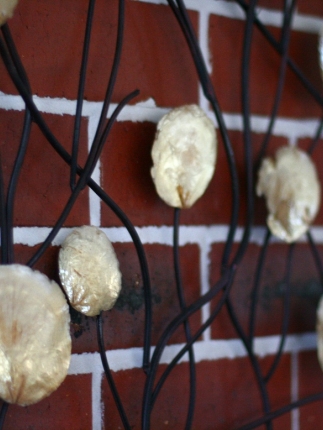 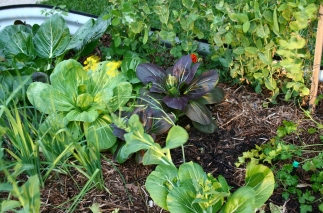 ABOVE: Garden details. I love that the Jenkins grow vegies on their front verge, like quite a few people in Mt Hawthorn do. Such a nice way to use verge space. I wish it was de rigueur throughout Perth.

I love Mount Hawthorn too. One of the oldest suburbs in Perth, it has many charming 1900s homes, some restored, others untouched for decades, often occupied by elderly owners who have lived in the area for much of their life.

In recent times the area has been attracting a lot of couples and young families. This is going to sound crass, but as the elderly home owners ‘die off’, their cottages are often bought as renovation projects by couples or young families – like Michael and Jane. It’s created a suburb with a charming mix of the old and the restored, the young and the old, with a warm, friendly community feel where neighbours say hi, kids play in front yards and people grow fruit trees and veggies on their front verge. Walking into the Jenkins house, it gives that same warm feeling immediately. But it wasn’t always like that, as Michael explains.  “It was very sterile,” he says of the house, then a two-bedroom cottage, when they moved in. “There was a lot of lino and all the jarrah doorframes had at one point been varnished and then painted in white gloss. It had high ceilings but it had no character. It was quite bland.”

The classic red brick to the exterior had been covered in shiny, ugly white concrete and the windows covered in awnings. On the roof were decramastic tiles, a 70s trend that some swear is the worst roofing material every invented. One of its faults is that over time the coating and texture wears off, clogging gutters and drains. It also deforms and buckles easily so the Jenkins needed to have it replaced. There was also an unattractive 70s dark brick wall and awnings covered the windows.

Michael and Jane painstakingly stripped the white gloss and varnish off all the interior doors and door frames and stripped wallpaper. While they did some renovation work over the years as they had their three children, their biggest improvement was finished only recently, a spacious, solar passive extension with an open-plan living, dining and kitchen that opens up onto an alfresco. Designed by Melissa Cox of OzEco Design, the extension also encompasses a study, main suite and laundry.

The extension was built by Rob Maughan of Maughan Building Company, who comes along to chat to me. The Jenkins and Rob get along so well, poking fun at each other the way only people comfortable with one another do, that I presume they are old friends, so I am surprised when Michael tells me they only met Rob after Melissa recommended him.

Michael says Rob was the only builder they approached. “We just liked him straightaway,” he says. “We had him round, showed him what we wanted and he said ‘oi, yeeah” (putting on a broad ocker voice). Rob looks at him resignedly. 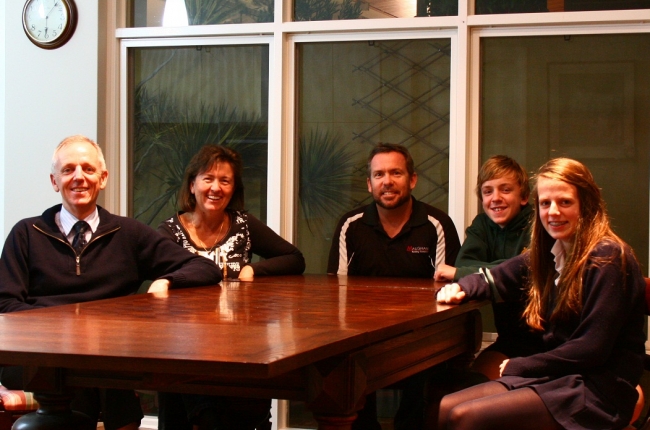 THE JENKINS WITH ROB (back of table): We tried to get youngest daughter Kate in this pic. But as soon as we said we’d like a family photo, she went from playing Guess Who happily to running away to hide in her room, as a five-year-old is wont to do. Michael went to knock on the bedroom door. “I DON’T WANT TO HAVE MY PHOTO TAKEN,” came the tiny angry roar from behind the door. “Okay,” said Michael amiably. Fair enough. “AND I’M NEVER COMING OUT EITHER.” Wow. Taking it to another level. 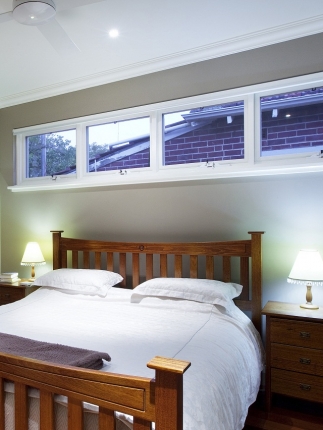 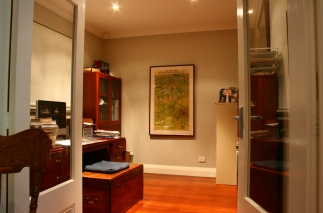 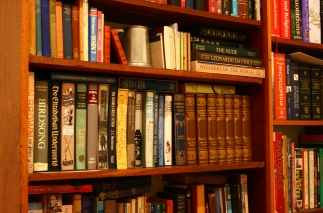 ABOVE LEFT: The main suite. RIGHT: Michael's favourite room, his new study. On the wall hangs an original war poster of Belgium. Bookcases made from recycled jarrah floorboards house his vast library.

Wanting to restore the elevation to its traditional 1920s roots, the ugly white concrete render was chipped off and the elevation tuckpointed. The top part of the original house had been done in roughcast render using charcoal. It was painstakingly copied, using blue metal, for the front of the home to give it that traditional textured look again. Ornate white painted-timber windows replaced the drab ones at the front and a red brick front wall was built to tie in with the tuckpointing.

When the time came to extend, Michael and Jane each got something they had always wanted. Michael got a study, now his favourite room, tucked away in a quiet corner of the house away from the kids’ bedrooms. The desk overlooks the back garden. On the wall hangs an original war poster of Belgium. Bookcases made from recycled jarrah floorboards house his vast library.

Meanwhile Jane got her dream kitchen. “I love the kitchen - I had such a horrible kitchen before!” she says. Pictured below, with Jane’s mum scraping off the wallpaper, the old dark 70s kitchen has now been turned into a lovely family bathroom.

Jane’s new kitchen is now the heart of the home, with a big island bench that is home to the family’s fish. Contemporary white cabinets are complemented by CaesarStone benchtops and stainless steel appliances. Michael says they had a big debate over whether to get a steam oven or not - Jane wanted one, he did not see the point. I notice that there is a steam oven, a tea towel hanging lethargically from its handlebar. I see Jane won that battle.

“Oh, the steam oven is great,” Michael says. “We use it to dry teatowels.”

Jane rolls her eyes and tells me it is used for much more than that. “We do vegetables, chicken, roasts, baked cheesecake – it’s fantastic.” 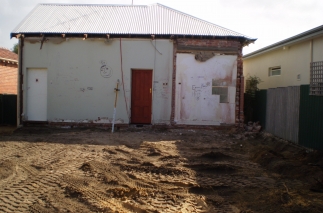 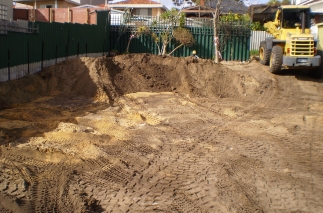 ABOVE LEFT: The family's beautiful 1920s dining table hails from the same era their home was built. It's made of French oak with feature inlay and extensions on two sides - I fell in love with it. When Michael told me they picked it up an auction for only $400, I think I cried a little bit inside. I paid $500 for my nice-enough-but-soulless rubber wood dining table – plus mine was the cheapest one I could find that I didn’t hate (if you’ve ever gone shopping for a dining table, you’ll know that the nice ones are expensive). Auctions are clearly the way to go people! ABOVE RIGHT: An antique chair in the dining room.

So beautifully done was the extension that the home was a finalist in the 2010 HIA-NAB Awards in its Renovations & Additions Project category. The certificate now hangs proudly above the toilet in the ensuite. “We couldn’t find the right place to hang it,” Michael explains. So work is done, an award’s been won - how was their renovation experience?

“We’re very happy,” Michael says. “One of the things we like about Rob is that he’s a bloke who does things properly. We’re still on good terms. I think if you can do a build project and still be friendly at the end of it that says a lot. We’ve recommended him to lots of people we know.”

Michael says all of Rob’s tradespeople came to work “really enthused” about the project and I thought that was nice – when people really put energy into a renovation I think you can feel it. For the Jenkins, the sterile shoebox of a house that they never liked in the beginning is now their gorgeous, comfortable, well-loved family home with plenty of space for the five of them.

According to Michael, they plan to stay put. “I said to Jane I’ll be coming out of here in a wooden box,” he says.

ABOVE: The beautiful new ensuite to Michael and Jane's bedroom.

A renovated 1920s character cottage with a solar-passive rear extension

Posted: Tuesday, September 25, 2012 in Home Envy , Before & After .
5 Comments
I love receiving your comments!

Jane Goldsmith - Wednesday, September 26, 2012 at 9:18AM
Such a great read Maya! We bought some land in Mt Hawthorn a few months ago and are looking for a builder and practical ideas to develop the property. Your first article really hit all the bases in being so applicable to us! Thank you :)
Reply

Maya - Wednesday, September 26, 2012 at 4:52PM
Aw thank you Jane! Oh my goodness! A block in Mt Hawthorn - I'm so excited for you two!! That's awesome, congratulations! I'm sure you will build something really homey and beautiful. I want to see pics when you start :-)
Reply

Rob Maughan - Sunday, August 7, 2016 at 9:44AM
such a fantastic project & even better clients, thank you for a terrific write up Maya
Reply
Post a Comment
Thanks for your comment.