Present Idea: Personalised Guess Who With People You Know

How was your Christmas break house nerds? Mine was pretty relaxed, involved lots of fresh seafood, pavlova, getting angry at Mr House Nerd for eating all the gingerbread, and watching so many episodes of The Walking Dead I had zombie nightmares. Pretty standard.

Today I thought I would share a Christmas present I had a bit of fun preparing. I have two younger sisters, both in their 20s, and one of them loves having board game nights with her friends. I made her personalised DIY Guess Who using pictures of our family and people we know. 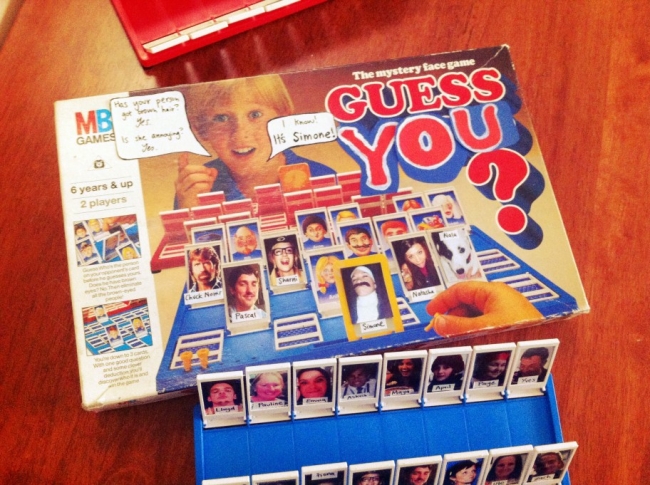 My customised Guess Who for my sister. feat. Chuck Norris. 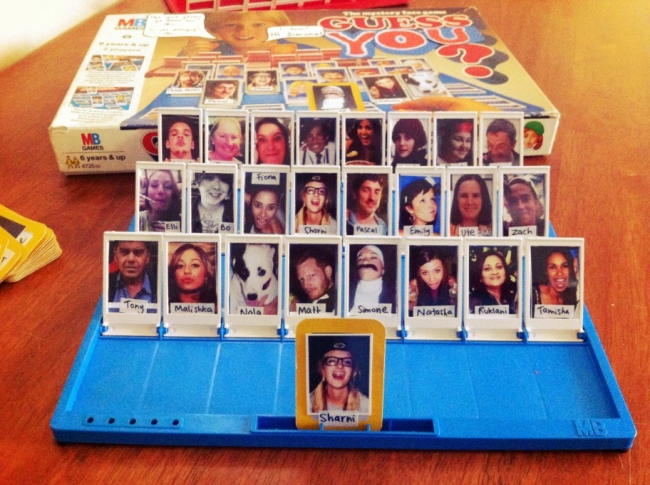 I know, I know, before you go saying how clever I am, I have to admit that I can’t take credit for the idea! I saw it on the amazing tool that is Pinterest via this post. I love Pinterest! It’s one of my favourite sources of creative and crafty inspiration and is an awesome way to get motivated and get ideas (I also like to sit there slumped over my computer and slack-jawed, just endlessly clicking on pretty pictures). You can check out the House Nerd Pinterest page here.

Anyway, back to the game. I changed the lid of the box so it read Guess You and stuck little pictures of people we know on it. I chose mostly unflattering or ridiculous photos of our family and friends. There were pictures of people drunk, yelling, singing, doing Movember, stuffing their face. So yes, be careful with what you have tagged on Facebook. Or you might just find your carefree or downright ugly moments forever immortalised in the Anderson family game of Guess You. Such as that late night you went to McDonald’s drunk, screamed “YOLO” and started eating a sundae a previous diner had left abandoned on a table. I’m not looking at anyone. 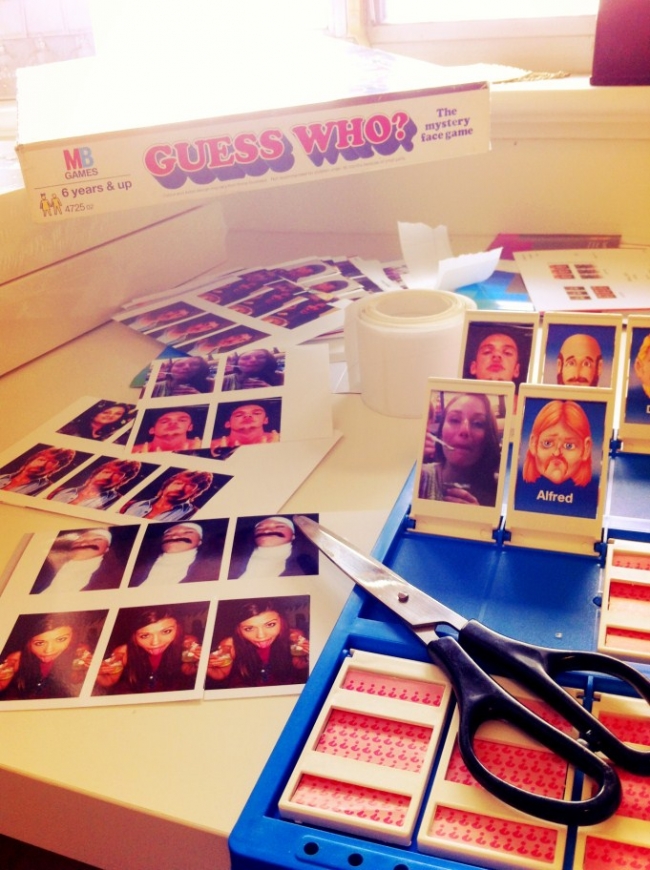 The link on Pinterest didn't work properly, but it wasn't too hard to figure out how to make it at home. But here are my terrible instructions anyway.

DO IT YOURSELF - PERSONALISED GUESS WHO USING PEOPLE YOU KNOW

First I ordered a vintage set of Guess Who off eBay. I wanted the old-school 80s version rather than the modern one but you can use whichever.

Then I went on Facebook, the greatest tool for all stalkers, and took screenshots of our family and friends. Alternatively you can download them these days *creepy stalker smile* Lots of drunk photos on Facebook. Guess Who gold, my friends. I even used this one of our dog looking suspiciously drunk. 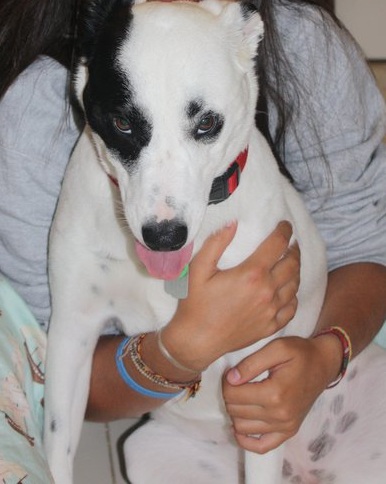 I am crap at using Photoshop, so I copied and pasted the screenshots one by one into Paint and cropped them into portrait shapes. (My graphic designer, Photoshop-whiz best friend will probably kill me for the way I did and am now explaining this, but I will go on. I am a soldier like that).

Now if you have a colour printer you can easily just print off your portraits at home. But because I didn’t have a colour printer, instead I copied and pasted each portrait into a Microsoft word document and copied them three times, so each person had a row of three little identical images. I kept doing this until I had covered all 24 people.

I then did a screenshot of every two players, copied and pasted them into Paint and saved them as JPEGs. So by the end I had 12 files - each with three little pictures of two players.

I got each photo printed at the photo centre in three different sizes – standard, one size larger, and wallet-size. I figured as long as I had three sizes I would pretty much cover my bases and not have to worry if some of the faces were too small or too big. It worked out perfectly. All up the photo printing came to less than $10.

Then I cut each player’s photo to fit the little flaps and stuck them in – it was very easy to do. If some of the photos didn’t fit quite snugly I just added a bit of stickytape to the back. I stuck a name sticker using white sticky labels onto each person. Do the same things for the cards.

With the cover I pasted cut-out card letters over the top of the lettering to change it to Guess You, did some dodgy-looking white out around the letters, and then used leftover photos to decorate the box to personalise it.

I changed the speech boxes coming out of the little boy’s mouth so that he was saying, “Has your person got brown hair?” “Yes.” “Is your person annoying?” “Yes.” “I know! It’s SIMONE.”

For fun I added Chuck Norris onto the cover as one of the players. But he’s not in the actual game. Because you don’t guess Chuck Norris. Chuck Norris guesses you.

Mr House Nerd said he didn’t get it. I’m not quite sure I get it either even though I wrote it.

Hope you have an awesome New Year’s Eve house nerds. If you have had any "present successes" this Christmas or in previous years I'd love to hear about them.
Tweet

Amanda - Friday, January 11, 2013 at 2:54PM
Maya, this is such a seriously cool present, not just because it brings back memories of the 80's spent playing this game in my household, but because it is so unique and personalised... love it!!
Reply

Maya - Sunday, January 13, 2013 at 7:24PM
Ahh thanks Amanda! :) I have to admit it was one of those presents that you know is so good, you just can't wait to watch the person unwrap it (modesty? what is that?) Although I admit part of my excitement would have been because I couldn't wait to play it myself. You should try to make one, it's such a laugh to play! We actually never owned Guess Who when I was a kid... it was one of the very few board games we didn't have! I always wanted to play it at friends' houses.
Reply

jax - Monday, January 14, 2013 at 3:34AM
Seriously the coolest present EVER! I am now on the look out for a guess who to personalize for my sister. YOU ROCK House Nerd! x
Reply

Maya - Monday, January 21, 2013 at 11:05AM
Aww thank you Jax!! I love it when you give a present that goes down a treat. Go the handmade prezzies! And eBay had lots of Guess Whos when I looked :D
Reply

Chris - Saturday, November 9, 2013 at 1:41AM
Nice work Maya! You should take a look at our version at Fancy Features if you get a chance.
Reply

Maya from House Nerd - Monday, November 11, 2013 at 2:14PM
Chris I just jumped on - that looks AMAZING!! I want one!
Reply
Post a Comment
Thanks for your comment.