So on Monday night the Today Tonight segment I was in went to air! Mr Nerd and I sat down to watch it, him happily, me with great trepidation. I was all jittery and twitchy. But I only screamed out loud a couple of times during the watching, once when I first saw myself at the beginning (you don't understand, our new TV is REALLY big, and my face was REALLY large) and once at the end, when I said “exciting” in a weird way.

As soon as the show ended, my phone went OFF with calls, texts, emails, Facebook messages. This continued the next two days. I couldn’t believe it really. It felt like all these good feelings were high-beamed at me all at once. Like when we got engaged. Or when we got married. Or when we had our potato party and I carried around the potato cake pops. 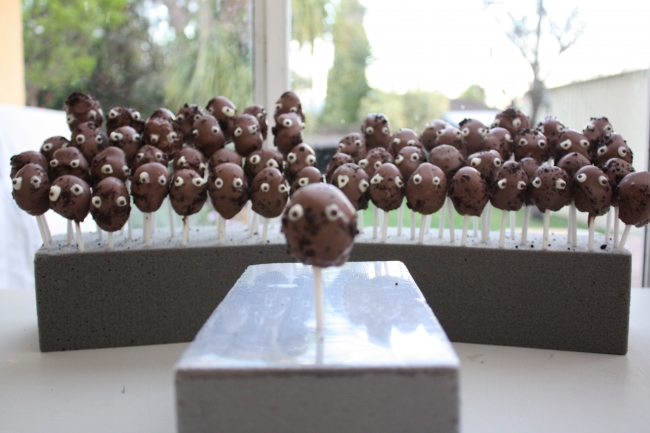 Who WOULDN'T love me? Potato naaaaah 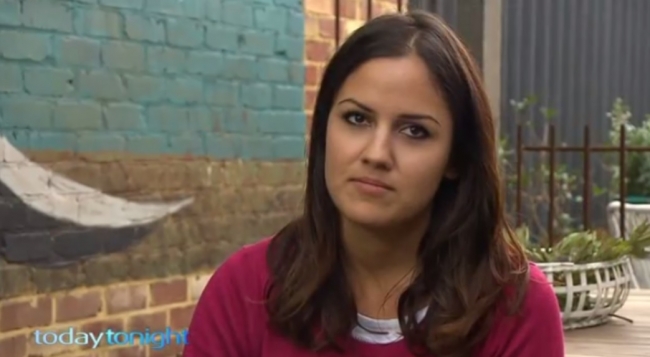 Probably thinking of something intelligent to say. 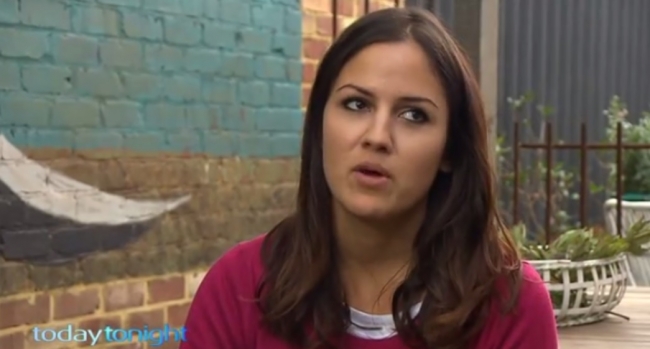 You can check out the clip below or on the Today Tonight YouTube channel here.

Honestly I don’t think I have ever felt quite so popular or received so many text messages, emails and Facebook messages in one hit.

Except when Mr Nerd and I got engaged. And when I put up this photo of Nala on Facebook, which I am pretty sure has gotten more likes than any other status update on my Facebook, ever. And it’s not a Facebook status about ME, it’s about THE DOG. (And it’s not even like she’s doing anything outstanding! Ok rant over). 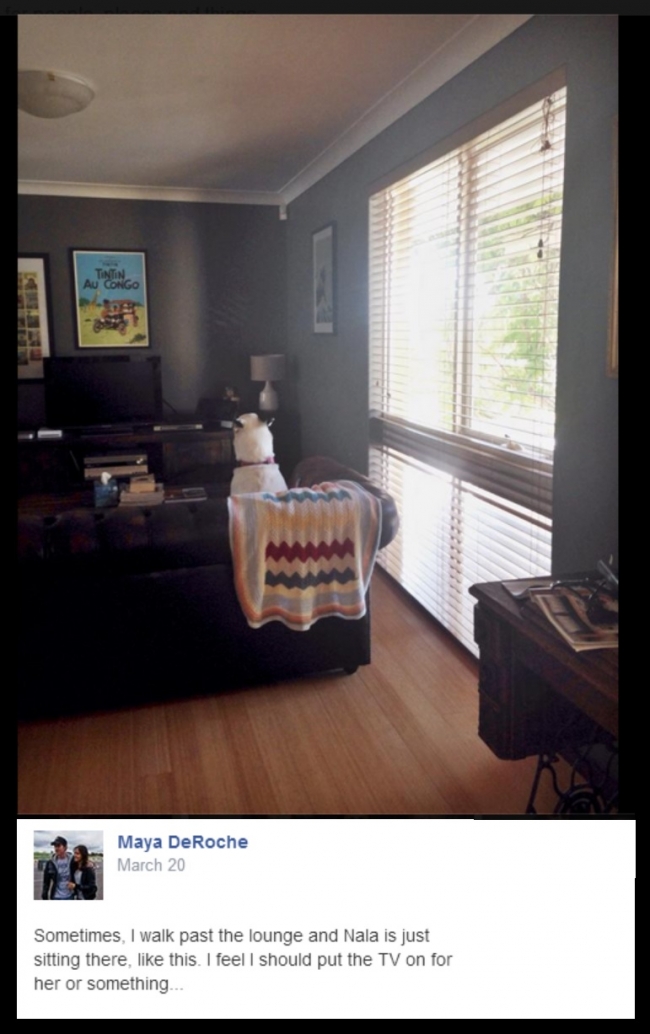 Mr Nerd said that he will forevermore laugh at my “faux home office scene” in the segment where I pretend to flick through a tome and try to look wise. Which is understandable, because I look suicidal in those bits. I don't know why.

He was disappointed that my giant pimple didn’t make much of an appearance on his giant new big screen TV. But that is because I was wearing the blue top when I had the giant pimple, and they only used one of those clips and it was only a couple of seconds long.

Anyway, it was very nice to get so much nice attention from my people. Even if they included texts like:

“OMG! You look great!! No pimple in sight and I’ve been up close to the screen looking.”

And from my frenemy...

“Hahaha!! I will admit, it didn’t really look like you… or sound like you… I liked your serious work face though! You opened that architecture book up with such purpose and…. ANGER!!! Bad book.”

After the show ended, Mr Nerd and I decided to go to see How to Train Your Dragon and there was like that vain 8-year-old part of me that was thinking loftily, “I wonder if anyone at the cinema will recognise me”……. no-one did.

We had a very nice night at the movies anyway. 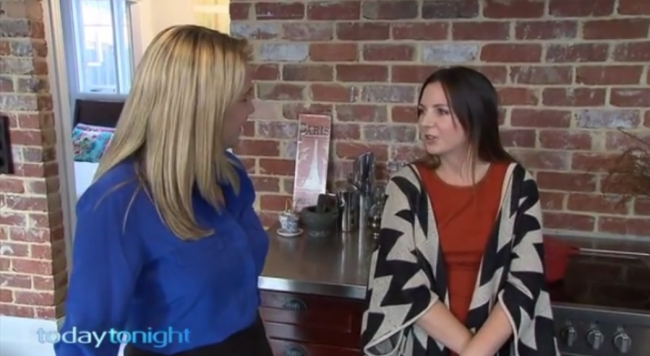 ABOVE: Channel 7 reporter Chantelle Toohey and Etica Studio director Carla Karsakis, whose house was featured. Remember I wrote about her amazing 'Recycled House' once? You should watch the clip because it features some extra glimpses into her beautiful home. One of my faves. 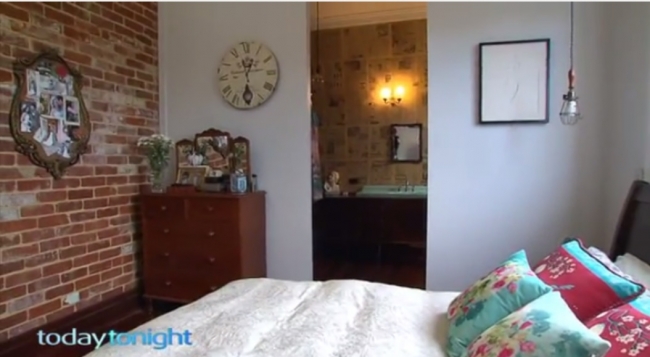 ABOVE: A peek of Carla's home. 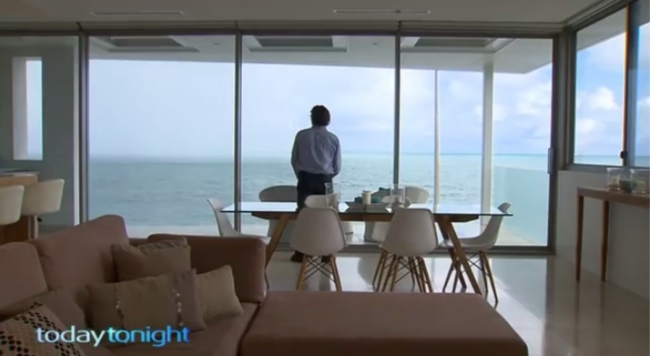 Thank you Channel 7 reporter legend Chantelle Toohey for featuring me in your segment! It was a very exciting start to the week! Maya x

Ashlea - Thursday, June 26, 2014 at 5:41AM
Loved it Maya! Well done, I honestly didn't see any pimple, I was too busy looking at your amazing hair (and the houses of course!). Congrats, what a great accomplishment :)
Reply

Emma - Thursday, June 26, 2014 at 11:16AM
Hahaha Maya I know exactly how you feel! I was interviewed recently for an ABC article, everyone loves you when you're on TV, even if its a ridiculously short amount of time (my situation, not yours!). Great article, hope you had fun and got a bit of a laugh out of it. (notice how polite I was, I didnt even mention the pimple!)
Reply

Dani - Thursday, June 26, 2014 at 4:07PM
Aren't we always so hard on ourselves? You looked great and sounded totally calm but I completely get the cringe at seeing and hearing yourself, I cannot even listen to my voicemail recording without cringing in horror (not sure if it's nerves of being recorded or my voice really is as high pitched as it sounds). Oh and for the record I just thought the pimple was a giant mole... Joking I honestly did not even see it haha
Reply

Sara - Thursday, June 26, 2014 at 4:25PM
you were great! I agree with Dani.... we are always hardest on ourselves. Good on you for doing it despite being nervous! Also did I hear someone say potato cake pops?
Reply

Sally Ridge Illustration - Friday, June 27, 2014 at 10:58AM
Wow how exciting! Excellent segment - though I must admit, the big Cottesloe home doesn't float my boat very much, I love the salvaged one. I love a bit of history, knocks & bumps, and a heavy patina. Excellent job!
Reply

Amanda - Wednesday, July 2, 2014 at 9:19PM
Oh hooray!!! You shared a clip here. Do you know, all the day of your airing, I was saying in my head "watch Today Tonight, watch Today Tonight" and then at about 8 that night, I sat down to flick through Instagram and saw your reminder a tad too late... I kicked myself and then made Paul search the Internet for ages trying to find a clip for me but no luck. SO I just did a happy dance that I got to see you here. You were great and spoke really well and calmly and professionally xx
Reply

Linda Slater - Monday, July 14, 2014 at 10:19PM
Congrats Maya! You look wonderful and have such authority! Movie Star status achieved...tick.
Reply
Post a Comment
Thanks for your comment.