Time for a quick update on life at The Crap Shack.

LEARNING FROM THE PRO

When I started House Nerd a year ago, I never would have imagined that by this point I would have met so many awesome people just through blogging. Some have turned into real friends. 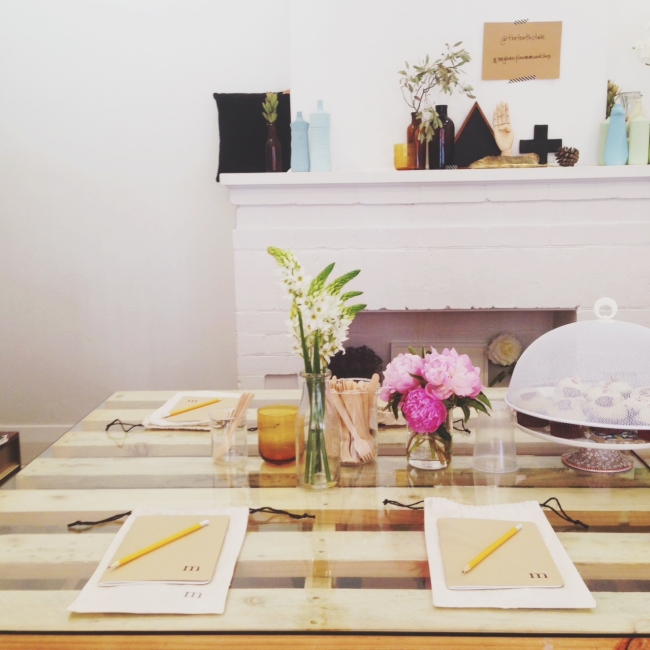 Meghan Plowman is one of them. She is a stylist and photographer and has an ability to take a photo of the most mundane thing (with her bloody iPhone too) and makes it look so enchanting you feel like you could walk right into that photo. Even if it’s just a picture of a twig, she makes it look like The Most Awesome Twig in the World. Meanwhile if I showed Mr Nerd my photo of a twig, hoping for ‘arty’ or ‘moody’, he would say it just looks like when you take a drunk photo of the ground by accident.

Testimony to Meghan’s ability is her cult following on Instagram, and on Saturday, she showed a few of us her styling and photography secrets with an Instagram workshop, also discussing how to use Instagram to build a following and grow your business or brand. Workshop spots were sold out within hours so Meghan has already planned another (which also sold out the same day!) but not to fear, she will be running others!

Saturday’s workshop was held at one of my favourite coffee spots, The Tenth State, and it was a lot of fun. We played around with styling and taking photos, learned some Insta-dos and don'ts, and I got to meet some really nice people in the Perth creative scene, some who already followed on Instagram or had liaised with by email but hadn't yet had a chance to meet in person! Always nice to put a face to a name. If you are a Perth creative or business owner I would definitely recommend trying to book a spot. 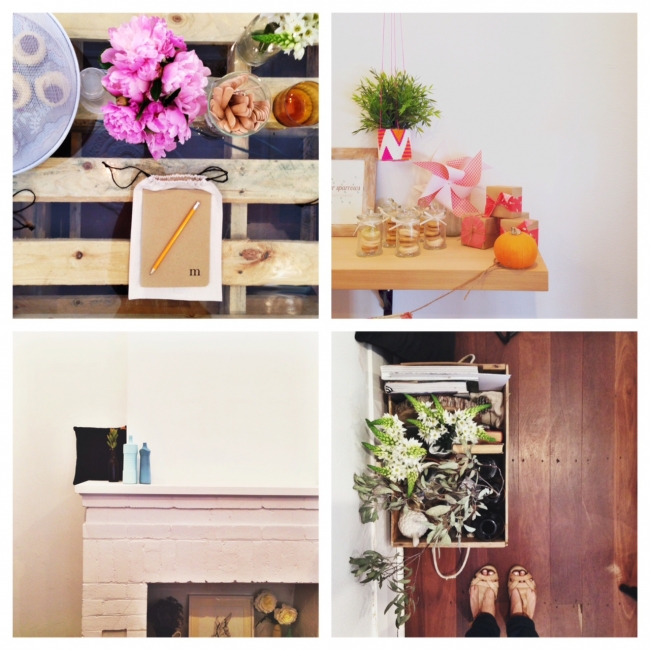 THE GERIATRIC SIDE OF ME CAN REJOICE

My nerds, I have some news. After years of yelling “WHAT??” like the Saucepan Man I am finally getting new hearing aids. Yes, I like to lead an exciting life.

My new aids will be a dark brown colour called “Bronze” in the catalogue. I was going to go for “Champagne” but my audiometrist, Anthony Earle at iHear, who is a lovely Irish man with silver hair, informed me that it is no longer the fashion to match your hearing aid colour to your skin. Apparently, these days the cool kids are matching their hearing aids to their hair, says Anthony. I didn’t even know there were trends when it came to hearing aids, but there you go. Anthony held up different hearing aids to the side of the head like a hairdresser choosing highlights. I kind of felt like complaining. “But what if I want to go blonde?”
“Don’t.”

Coincidentally I once went as the Saucepan Man to a Faraway Tree party. It was not a stretch to get into character. 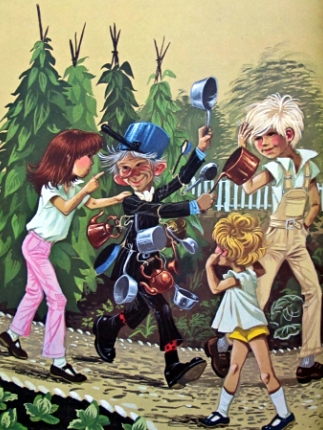 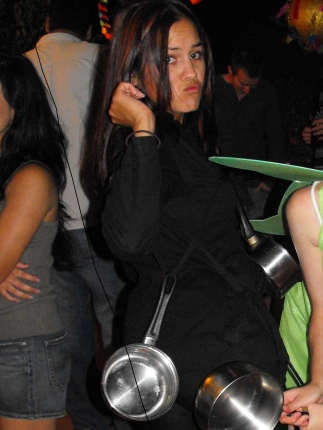 A BIT OF KITSCH FOR OUR KITCHEN

As you might know already I am obsessed with buying other people’s old crap, ie: going to flea markets. WOOhoo! Honestly, there are few things I enjoy more than coming across something very cool and paying next to nothing for it. Yesterday I saw this enamel boiler at a market and snatched it up before anyone else could. PRETTY! And it was only ten bucks!

My mum, who doesn’t understand my love of mid-century modern, screwed up her nose and asked me if it was going to be a water or food bowl for Nala. For God’s sake Mum. (Nala does have the most beautiful water bowl a dog can have; a beautiful duck egg blue pottery bowl handmade by an artist in Albany that I got from a vintage market, but that is beside the point). 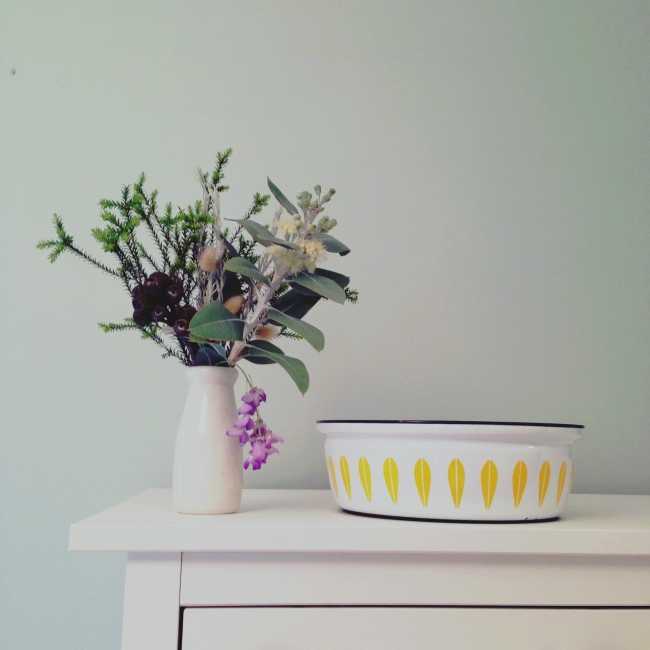 Anyway at the markets, I knew I had seen the yellow leaf pattern before, at interior designer and Scandinavian Exposure owner Yvonne Larsen’s lovely house. From her, I knew it was coveted, but after extensive Googling I still couldn’t remember who she said it was by. My lovely little Instagram tribe helped me out, naming the brand as Cathrineholm and its origin as Norway. They made enamelware that was a staple in households across Scandinavia and the U.S in the 50s and 60s and their iconic lotus pattern became the most famous and recognisable. 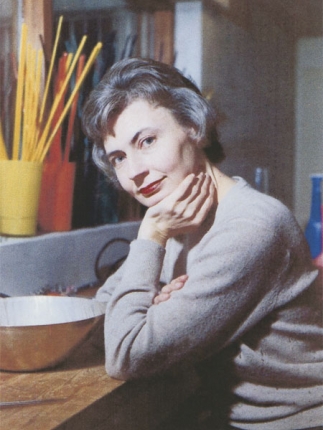 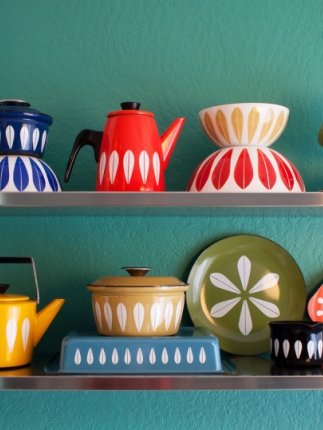 ABOVE: Photos from Ampersand Vintage Modern.

Yet the face behind the brand, designer Grete Prytz Kittlesen, who was known as the Queen of Scandinavian Design, didn’t actually design the lotus motif that made the brand so famous. It was a worker at Cathrineholm, Arne Clausen, who created it. Apparently Grete always hated it. Yeah, fair enough. Wouldn’t that kind of suck? It would be like if you were the main singer and the songwriter of a band and the triangle player wrote your greatest hit ever. And nothing you ever wrote after that was as good. Ok so I have no idea what it would be like to be in a band, whatever, just trying to empathise with Grete. Thanks to Ampersand Vintage Modern for the homewares history lesson.

Ok I'm going to try again, it would be like if you were a journalist at a hard-hitting newspaper and the annoying work experience kid broke the biggest story ever. Better. Maya x

Elaine - Monday, November 25, 2013 at 3:14PM
That bowl is a steal for $10! What a find! My grandma used to have a whole Catherine Holm set and I wish I had it now. I have to start checking out markets more often.
Reply

Maya from House Nerd - Thursday, November 28, 2013 at 3:00PM
I go with religious devotion. Mind you, I don't always get something, other days I come home with a bootful and Mr Nerd cries.
Reply

Hannah - Monday, November 25, 2013 at 7:31PM
There's so many things I love about this post I don't even know where to begin! I'm seriously regretting the fact that I didn't jump on Meghan's first workshop right away!! I hesitated (lack of funds drove me here)! It would've been so good to finally meet you and the rest too!! But I'm just as excited for the next one (: And whoohoo!! Hearing aids that match your hair! Honestly, who knew it was a trend! I'm sure you'll look amazing champagne or bronze or blonde (maybe not? I'm not sure).
Reply

Maya from House Nerd - Thursday, November 28, 2013 at 3:14PM
Thank you Hannah! Hahaha. We are bound to meet somehow! I know it! I fear you will be disappointed however by my real-life self. "Oh," you will say to yourself in disgust, "The House Nerd girl has a severe lack of wit in real life. She must pay someone to write her blog jokes for her." etc. I got my hearing aids the other day already and they do match my hair! Yahoo! The audiologist was saying his client before had fuchsia ones. Hmm I do not know if I could rock a fuchsia one... of all people you probably could! Something to bear in mind for when you are 94.
Reply

Hannah - Friday, December 6, 2013 at 1:31AM
Hahahah!! We share the same "fear". I always think people will be disgusted at how I am in real life - I tend to embarrass myself and the people around me a lot. Like yesterday, no stranger was kind enough to tell me there were small dried leaves stuck on my right cheek. Oh my gawd. The horror I saw when I looked into the mirror. Before that I was also monstrously gorging on not one but TWO boxes of sushi rolls. I was alone. I pray to God nobody saw me :3 I'm very sure though that you'll be lovely and as witty in real life - or else how would you ever get friends from blogging at all!? :p I think you definitely can rock a fuchsia one. I've seen enough photos of you that suggest how fun and spunky you are!! Try it next time :D
Reply

Maya from House Nerd - Tuesday, December 10, 2013 at 11:04PM
This made me laugh so hard. Small dark dried leaves stuck to your cheek? At first that sounded suspicious... it was sushi? AHhh totally understandable!! Hahaha. Not sure why no stranger would be so kind as to tell Leaf Girl to wipe her cheek, you poor thing. I would tell you! (probably with some kind of food smeared on my own face). Mind you, every time I tell some stranger they have loo paper stuck to their shoe, I have received nothing but dirty looks. Hey I didn't put it there.
Reply

Kelsie - Wednesday, November 27, 2013 at 1:50PM
AMAZING post lady! Your blogging style is flawless - and those images are bright, clear and perfect. Feeling very very lucky to have met you at the workshop - and hopefully we will meet again in the future :) I'm definitely addicted to your blog - never stop!
Reply

Maya from House Nerd - Thursday, November 28, 2013 at 8:24PM
Thank you Kelsie! Comments like those are what egg me on to blog more and more - thank you. How fun was the workshop? I have been snapping like a crazy person ever since. It was lovely to meet you in person! You were just as I had imagined! :)
Reply

Pele - Friday, November 29, 2013 at 8:14AM
Love it Maya, what an awesome find! And what a fabulous blog, lady! I'll have to keep my eyes peeled for details of Meghan's next workshop. In the meantime, I'm headed straight to Instagram x
Reply

Maya from House Nerd - Friday, November 29, 2013 at 10:20AM
Thanks Pele! I can feel the beginnings of an addiction now.... have a feeling I am going to be keeping an eye out for Cathrinholm everywhere I go! Let me know when you are on Insta! :)
Reply

Michelle - Monday, December 2, 2013 at 9:16AM
That course sounded so good I really want to learn to take better photos as well. Have just signed up with Instagram last month and loving it, especially the filters they tend to make my photos look a bit more exciting :) Yay for new hearing aids ... Boo for not being able to pretend you cant hear Mr Nerd say 'your turn to wash the dishes'!
Reply

Maya from House Nerd - Tuesday, December 3, 2013 at 9:35AM
Hahaha I know new hearing aids are not entirely without their disadvantages! ;) Yay you are on Instagram now! I love it. Such a nice friendly 'community' and so good for all things blog... you should definitely do the workshop! I'm not saying this just because Meghan is my friend! She definitely taught me a lot. She will be holding more of them after Christmas :)
Reply
Post a Comment
Thanks for your comment.