I have always been intrigued by people who pursue one career path, excel in their field, then turn around and decide to chase something completely and utterly different. It’s partly because I can’t imagine the level of dedication and commitment required for someone to study something completely new, right from the start, and then pursue it as a new career.

Lawyer-turned-architect Sandy Anghie is one such person. I first met Sandy and her husband Michael many years ago, when I was freelancing for The West; visiting homes most days of the week and writing on them. (And in typical Perth ‘everyone knows everyone somehow’ style, my dad knew them – with my dad and Michael being of Sri Lankan background (and as anyone Lankan in Perth knows, all Sri Lankan people in Perth have some common link somehow!)

Back then, Sandy was working as a lawyer, and she and Michael, who is a managing partner at EY, had just finished building a large two-storey home in Mount Pleasant. 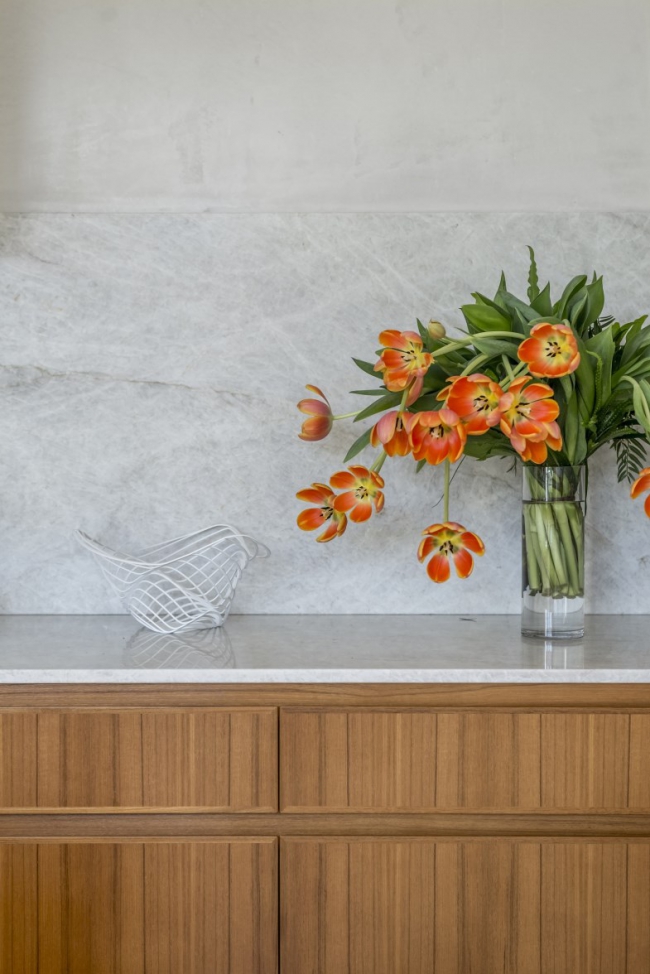 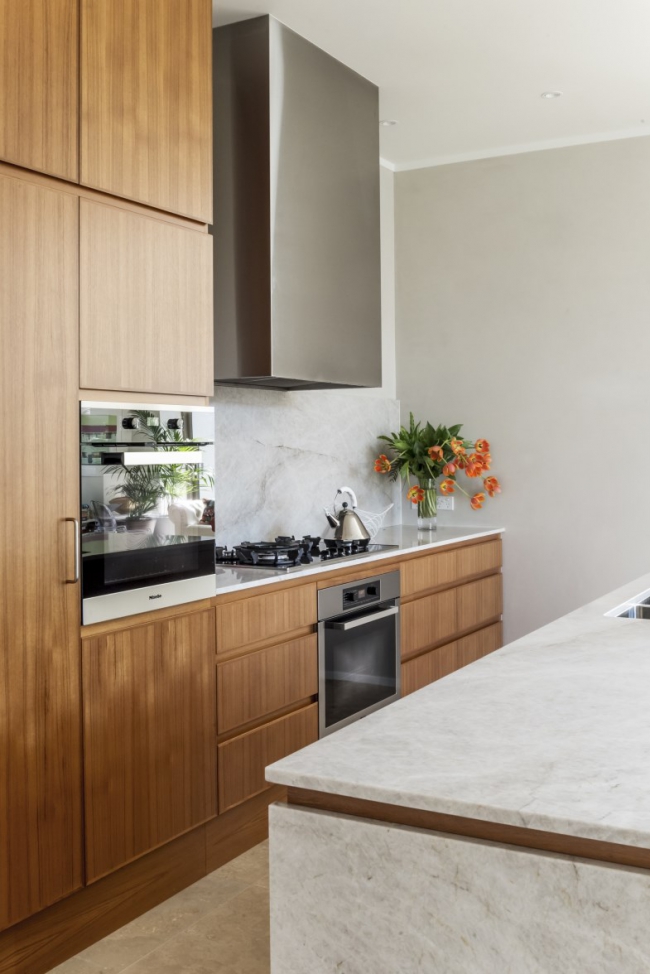 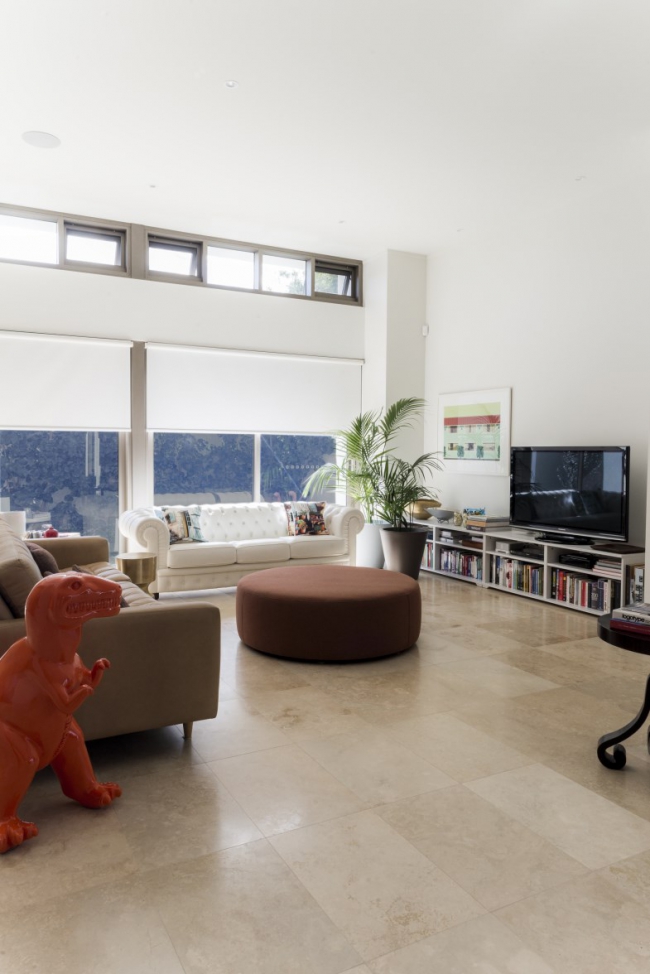 FAVE SPACE: “My favourite room is the living room,” says Sandy. “I work from home so my desk is hidden behind a wall in this space.” With high ceilings and plenty of natural light, even on grey days, like the day I visit, the room has an inviting feel – and with plenty of built-in storage between the two desks, the space feels organised and beautifully tidy. “I am very neat and tidy… my husband tries to be!” laughs Sandy. Photo by Meghan Plowman. 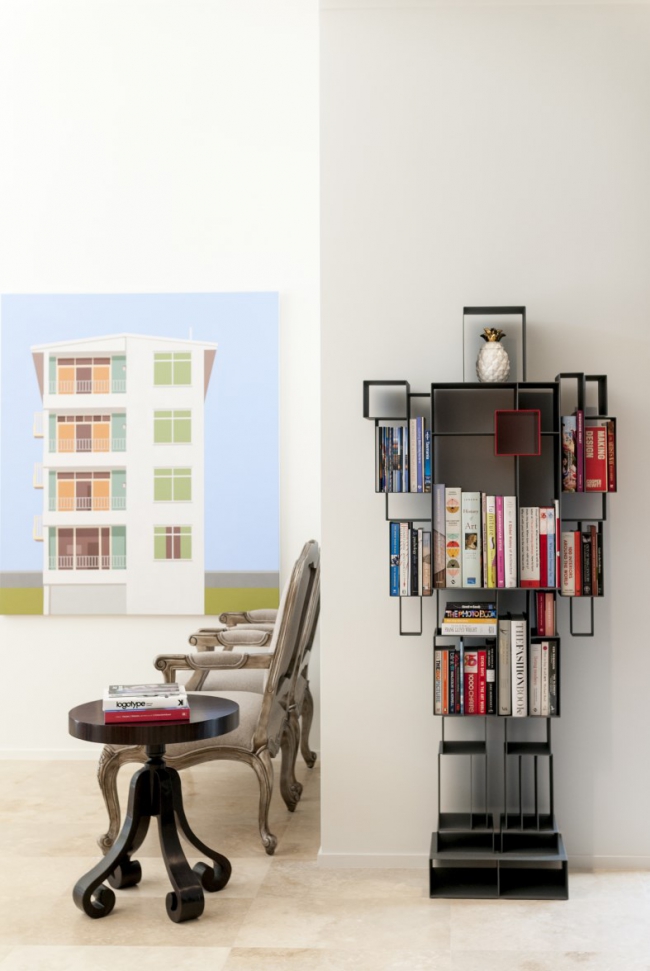 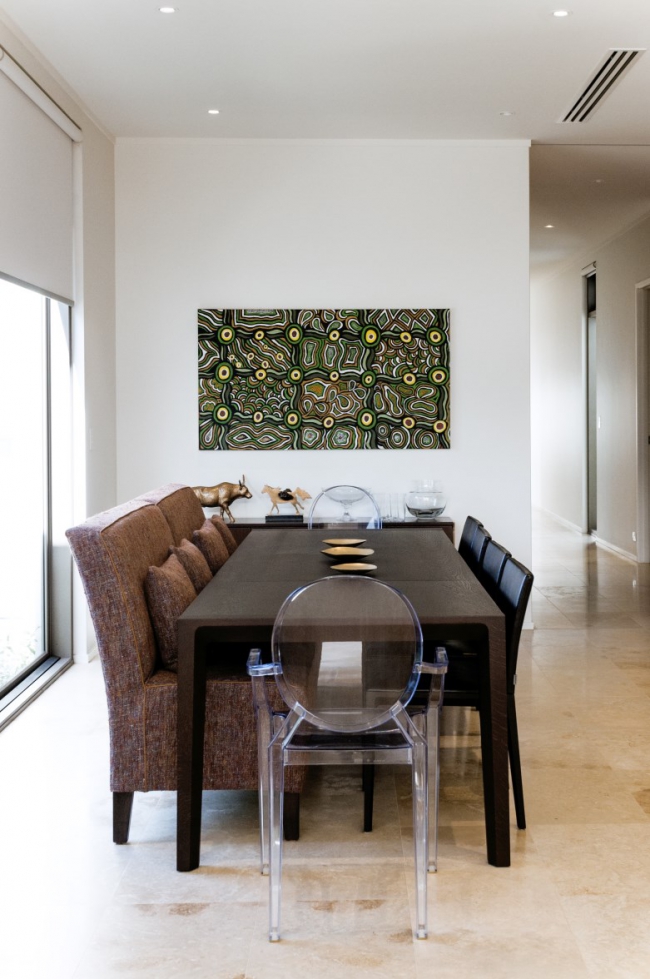 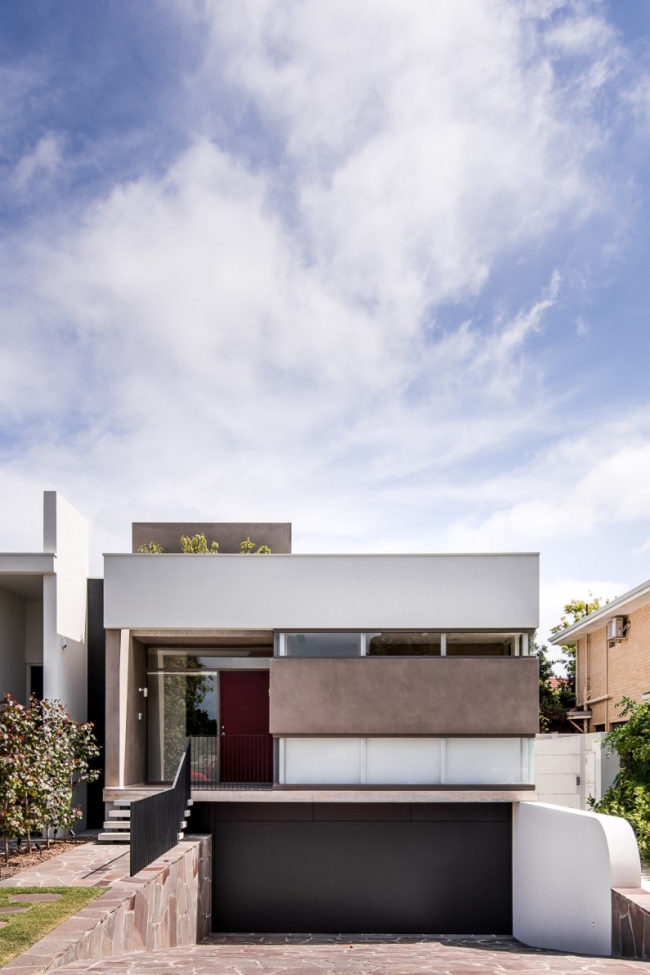 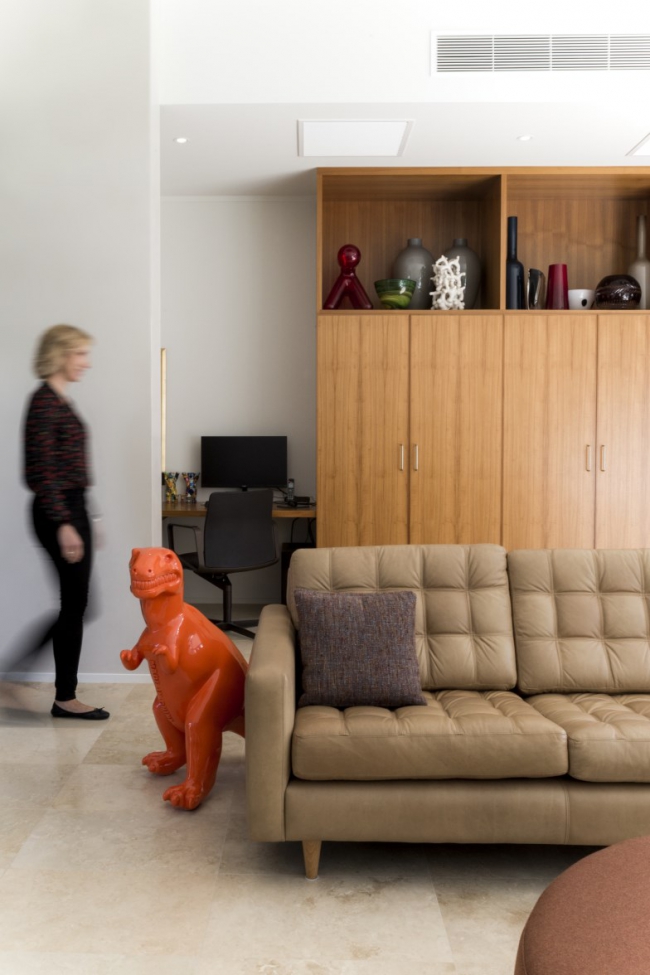 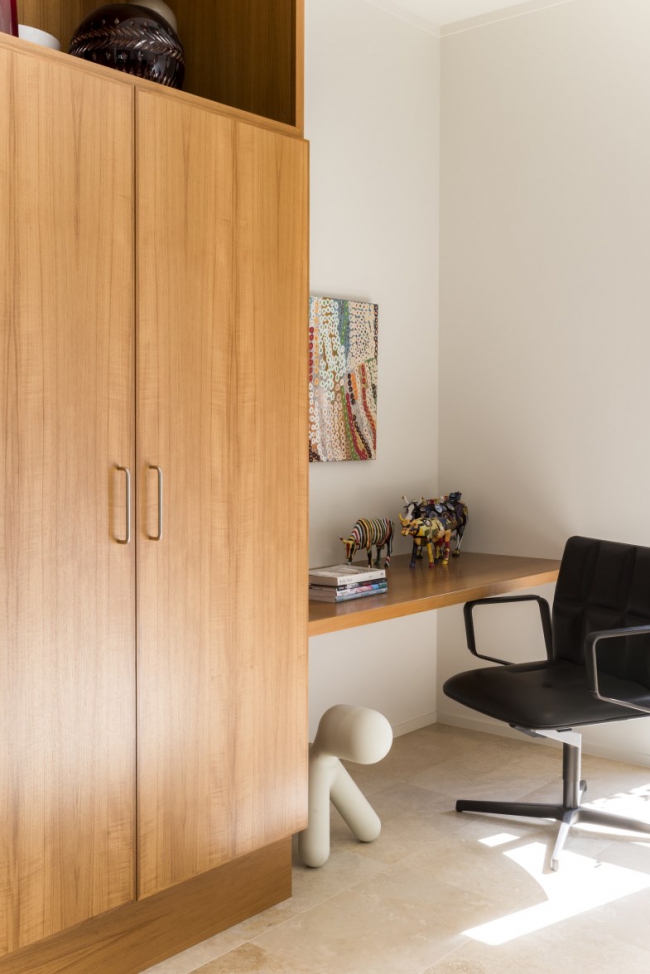 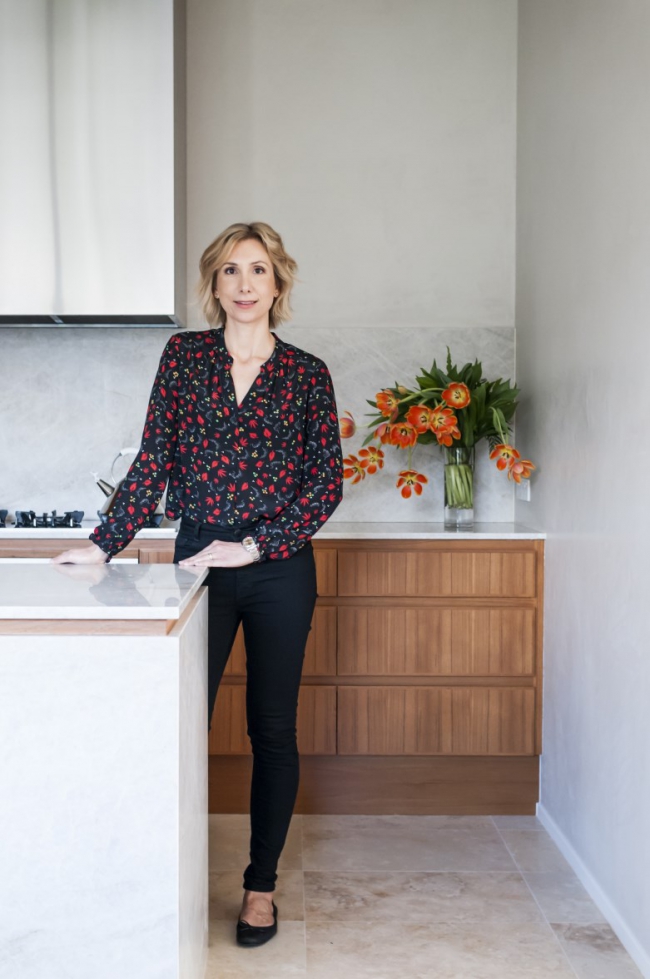 The next time I saw Sandy, she had not only started and finished a gruelling architecture degree while also working full-time; she’d also become accredited by the Board, started her own design studio (Sandy Anghie Design) and had designed and built the most beautiful home in Dalkeith for her and Michael - which I am so excited to share with you today!

No-one needs to explain their fascination with houses with me. But I still want to know – what sparked the big career change?

“I was a lawyer for ten years before returning to university to study architecture in 2006, but I actually always wanted to be an architect,” says Sandy. “I finished school in 1991 during a recession and the architecture and building industry were facing considerable challenges, and I was encouraged to study law. I took a year break from work in 2005 when my husband and I built our first home, and after working with an architect on that my decision was made – I wanted to pursue my dream job of architecture.” 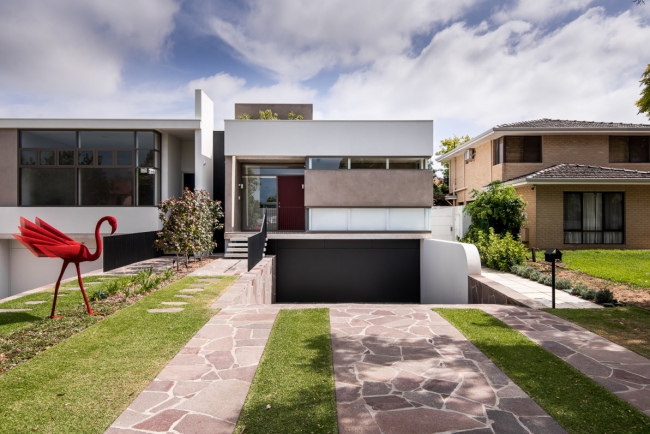 BLOCK CHALLENGES: The major challenge of the design and build process was in planning, says Sandy. “While setbacks from the boundary are generally required (the site has a coding of R10), I was able to obtain a council concession to build to the boundary on the west side,” she says. “This was important because the block is narrow and rear north-facing, so by maximising the width of the home I was able to create generous interior spaces on a single level and maximise access to northern light throughout the home.” Photo by Dion Robeson.

When it came to designing her own house, Sandy drew from the other homes she and Michael had lived in over their sixteen years together, making note of what they had liked and what didn’t quite work.

Thinking of Building? 10 Things You Should Know

Thinking of building in Perth? I have always been ALL about renovations and older houses my whole life. But it’s funny because in the past 18 months I have all of a sudden found myself thinking, if our financial situation allowed for it, I would actually love to be able to build a more contemporary house one day.

There have been a few triggers ...

One Tool That Makes Managing an Investment Property Easier

How many of you own or have owned an investment property?

If there is one major lesson Mr Nerd and I have learned from investing in a property, it’s to keep an organised record of photos and documentation of the property, inspecting it from the moment you get that place. And if you don’t, it could very well one day bite you in the ass.

Styling a Home to Sell It Faster

Have you ever been house hunting and seen a listing with real estate photography so bad, it’s turned you off from even visiting a house? Or have you ever visited a home for sale you’ve been eyeing off only to be disgusted the moment you step foot inside?

I have, while we were house hunting. Not only do I remember feeling turned off from bad ...

How to Choose Window Treatments (and Our Haunted Blinds)

What advice would you give your younger self if you could go back in time?

This is what I would tell my 24-year-old self. First don’t idly wax your eyebrows while reading a magazine. Focus, you silly twit. You will wax half your right eyebrow clean off, leaving you with an intriguing, puzzled expression for the next six weeks. You’ll then ...

We're Renovating Our House's Elevation! and the Before Photos

The renovating bug is a sneaky thing, isn’t it? Once you’ve been bitten by it (or the home building bug, which I hear is as equally infectious) it’s never long after you throw down your paintbrush one day and swear, “That’s it! I’m done! I’m not doing any more renovations,” that bug raises its little head again.

Well, this is it, guys - hands-down one of the coolest houses I’ve had the honour of featuring on House Nerd!

This is Nature Inspired Eco House. Designed for a tiny 200sqm infill block in the city, this two-storey, solar passive new home is eco-friendly and runs on renewable energy (with no air-con).

Built from a mix of eco-friendly materials ...

The Frank House by Iwan Iwanoff

So I’m going to make a bold call here, but I have to call it - I think I’ve found my favourite Iwan Iwanoff house yet. (At least my fave of all the ones I’ve visited so far!) It’s this quietly shy beauty – the Frank House in Menora.

The house is owned by Michael and Carmen Forde, who own Mary Street Bakery and MAKERism and who live with their ...

Thinking of Doing an IKEA Kitchen? The Pros and Cons

Arrrgh… I’ve been a bad blogger. Seriously I have been meaning to do this blog post for ages, I’ve had it mostly written up and I mostly just kept forgetting. (Sorry to those of you asked for it).

I am disturbingly absent-minded. I don’t know how I retain stupid information, like that there are four to six harmless mites living on the base of ...